It was only when rugby returned, with little or no-one in the grounds and fake TV crowd noise filtered out, did we realise how much Bundee Aki yapped, hollered and cajoled during games.

The Connacht and Ireland centre had everyone talking, about the amount he was talking, when the professional game kicked off again with Guinness PRO14 action. Those of us lucky to be at the Aviva Stadium to report on the end of the 2019/20 season noted it and Glasgow Warriors star Ryan Wilson remarked upon it after the first game of the 2020/21 season in Galway.

"Bundee Aki actually made me cringe a little bit, at how much he was going at it," Wilson said on The Offload podcast. "I even asked a couple of his teammates, 'God, you boys must be struggling with him going at it'.

Aki was up for media duty at the IRFU's High Performance Centre, this afternoon, and shed some light on his talkative ways and the thought process behind it.

"If you ask anybody in the teams that I've been with, I'm a loud person. I get on people's nerves at times, even though I might just want to have a laugh. But I try to bring that on in teams and in a game. It's obviously hard because we want our crowds, 100%, to be out there to bring the noise, for us to feed off.

"At the moment, we're going through hard times but we need to be able, as a team, to bring our own energy and atmosphere - to be able to feed off each other. If I can do that, not just with how much I talk but through my actions and even supporting the boys off the pitch, then that's just what I'll do."

"I do a lot of talking at training, during the week," Aki adds. "My teammates at Connacht are well used to my loud voice and me screaming at them, giving them crap here and there! They are well used to it. When the guys are opposite me, at Connacht, I'm forever in their face and forever at them. That's something we deal with as a group, as they do the same to me, and I've got to deal with it. It's so if it does happen, in a game, I'll be able to deal with it properly.

"It may sometimes catch other teams by surprise, as they haven't seen me do it. And if it catches you by surprise, it might be a slight advantage for us. Who knows? But if I do get under their skin, that's why I do it. If I don't, then I've just got to lead by my actions and follow through." 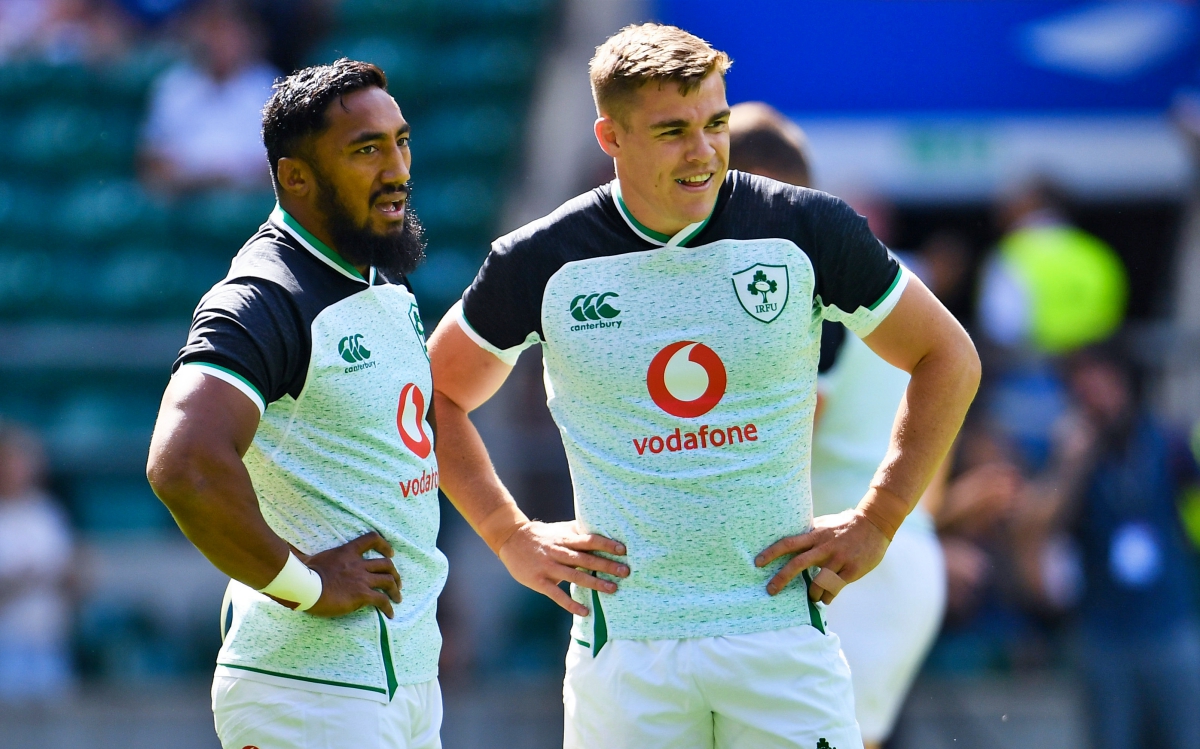 Bundee Aki and Garry Ringrose pictured together at Twickenham in 2019. (Photo by Ramsey Cardy/Sportsfile)

END_OF_DOCUMENT_TOKEN_TO_BE_REPLACED

The Ireland team to face Italy in the Guinness Six Nations resumption, on Saturday, will be named on Wednesday and Aki is expected to be given the 12 jersey. If form is the selection barometer, he should be paired with Garry Ringrose again.

Robbie Henshaw, Chris Farrell and Stuart McCloskey are all in the mix, but Aki and Ringrose is the most used Ireland midfield partnership in the past five years. On the Leinster man, who was named the Ireland Players' Player of the Year, last weekend, Aki said:

"He's been phenomenal since we've got back. I think he's the youngest one out of all our centres at the moment, but we learn a lot from him as well. Just from his experience, his calm and the way he delivers stuff, and talks. That's the way Garry is - he loves to lead by his actions but, when he needs to speak, everyone focuses in on him. He may only say a few words but it's always bang on.

END_OF_DOCUMENT_TOKEN_TO_BE_REPLACED

"To already play with him a few times and see him play has been great. Robbie has been playing phenomenally too. Everyone is doing great and feeding off one another... We are the lucky ones, to be able to do what we do."


popular
Jamie Carragher on the two Man United players Erik ten Hag can't trust
"I went up to the Italians and gave them a big auld shoulder" - Paul O'Donovan does it again
Man United have 'decided to sell' promising midfielder James Garner
Wexford Under-20 lights it up as Ferns win their first ever county title
Wexford, Waterford and Kilkenny down some good men as Australia calls
Graeme Souness under fire for calling football a ‘man’s game' while sat with Karen Carney
Graeme Souness 'doesn't regret a word' of 'man's game' comments
You may also like
2 weeks ago
“My confidence was on the deck" - Aaron Connolly explains why he has made the move to Italy
2 weeks ago
Every Irish transfer in football, this summer, as several big deals get done
3 weeks ago
Six Irish players make damn impressive 'World XV' that would take some beating
3 weeks ago
The frontrunners for Ireland's 33-man squad for the 2023 World Cup
3 weeks ago
All Blacks media manager explains why Ian Foster appearance was cancelled after Ireland defeat
3 weeks ago
Warren Gatland selects nine Irish players in his strongest Lions XV, right now
Next Page