Bundee Aki claims rugby award every Irish supporter can get behind

"He was brilliant for Ireland all year, so… Deserves to be sung as a hero."

Robbie Henshaw, Chris Farrell, Garry Ringrose. All have come into the Irish midfield for big Test matches this year but Aki has been there for all but one.

The Connacht centre was rested for the Melbourne win over Australia and sat out the final Test of the year as Ireland cruised by USA. He started the other 10 and was vital to what must go down as the most successful ever year for an Irish rugby side.

On Baz & Andrew's House of Rugby [from 46:00 below] the performances and accomplishments of Aki were rightly recognised as hosts Barry Murphy and Andrew Trimble handed out their end of year awards. 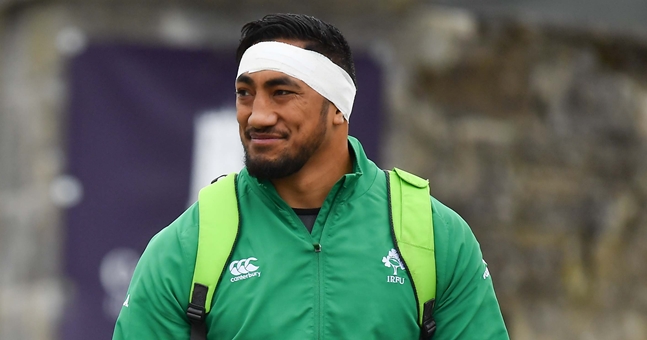 As part of their awards, which include accolades for Best Player (Tadhg Furlong), Young Player (James Ryan) and Moment (Johnny Sexton's drop goal in Paris), Aki was up for 'Unsung Hero of the Year'. He was up against Leinster lock Devin Toner and Munster No.8 CJ Stander.

"Devin Toner - the lineout connoisseur - he simply solves problems in the lineout and Joe Schmidt keeps going back to him because he does a job, week in, week out," said Trimble.

Murphy, meanwhile, praised Stander's work-rate. "He is ever-present whenever he is called upon to make a carry or empty the tank," said the former Munster and Ireland centre, "and every game, he looks like he gives everything."

END_OF_DOCUMENT_TOKEN_TO_BE_REPLACED

Once it came to making the call, however, both Trimble and Murphy were in agreement that Aki was a deserving recipient. Trimble commented:

"Bundee Aki played every game in the Six Nations, First and third Test in Australia and then Argentina and New Zealand in the autumn.

"And, I suppose there would be a big argument. A lot of people would – and this would be public opinion now, whether this is what Joe (Schmidt) thinks or whether his teammates think this, I don’t know – but, I suppose, generally people would regard the first-choice centres would be two of (Robbie) Henshaw, (Garry) Ringrose and Chris Farrell. But Bundee Aki has been there and he has delivered time and time again for Ireland."

While Aki missed out on several World's Best XV selections, his worth to this Irish team has been recognised on these shores - he was in SportsJOE's top five players of the year - and, more importantly, his teammates and coaches.


popular
In 86 seconds, Patrick Bamford becomes English football's voice of reason
'Make him hurt, make him yours' - How the Springboks ruled the world
Springboks legend Tendai Mtawawira tells us what he really thinks of Ellis Genge
'Beast' Mtawawira is a big fan of Mike Ross' Lions front row
Jose Mourinho is the picture of happiness and health after Spurs sacking
"We did find him hours later and we made up." - How Flynn and his best friend came to blows in Croke Park
Ugo Monye's revised Lions XV dominated by Welsh and Irish
You may also like
3 days ago
"Dorothy Wall, hands down... she's a wrecking ball!"
5 days ago
The six Lions spots being contested by Ireland and Scotland players
5 days ago
Rating the chances of Leinster's 16 Lions hopefuls
6 days ago
Jamie Carragher on how close he came to Ireland call-up
1 week ago
Full player ratings as Ireland dismantle Wales in Six Nations opener
1 week ago
Munster and Irish rugby almost lost out on one of their brightest stars
Next Page