One split-second decision to rush into a tackle and Bundee Aki's World Cup could well be over.

It was all going so well for Bundee Aki and Ireland. 28 minutes of their World Cup pool game with Samoa had elapsed and Ireland were 21-5 ahead.

Then, for Aki and Samoan outhalf Ulupano Seuteni, disaster struck.

END_OF_DOCUMENT_TOKEN_TO_BE_REPLACED

A loose pass to Jacob Stockdale saw Samoan winger Ah See Tuala reach the ball before Aki. He tipped the ball back for Seuteni and Aki hared after it. It was the equivalent of going into a 40/60 tackle but Aki pelted up and landed a shot on Seuteni after the outhalf reached the ball just before him.

Slow motion replays may have looked bad but the Samoan No.10 did appear to slide into Aki. The fact that he badly lost the collision and was left reeling did the Ireland centre no favours.

END_OF_DOCUMENT_TOKEN_TO_BE_REPLACED

Seuteni was taken off for a Head Injury Assessment and did not return to the field of play. Aki's game was over too, as referee Nic Berry decided this high tackle merited a red card [the seventh of the World Cup so far].

After his side's 47-5 win over the Samoans, Ireland head coach Joe Schmidt said:

"I'll have to review [the red card decision] and have a really close look. I've always said that Nic Berry is a very good referee... it is hard to argue at the moment but it is pretty devastating at the moment for Bundee."

Ireland rallied to score 26 unanswered points in the remaining 50+ minutes and they secured a place in the quarter finals. Aki is unlikely to feature in the game and his tournament could well be over, too.

END_OF_DOCUMENT_TOKEN_TO_BE_REPLACED

World Rugby laws would place that hit by Aki on Seuteni as a mid-range dangerous tackle. That would mean a ban of anything between four to eight weeks. Former Ireland international Jamie Heaslip told RTE that the IRFU may appeal the sending off and that Aki may be fortunate to get a reduced ban, but that his participation in any more World Cup games must be in doubt. Fellow pundit Stephen Ferris commented:

"It's devastating for him. One split second and six inches lower and he would have been fine."

The best Aki may be able to hope for is a three-week ban as the red card decision is highly unlikely to be overturned. Australian winger Reece Hodge, who escaped a card during a win over Fiji, was later handed a six-game ban for a high tackle on Peceli Yato but that was reduced to three games. That would rule him out of the entire knock-out stages.

Should Aki be banned for the rest of the World Cup, no replacement would be permitted. Injured players can be replaced in the squad but not those who have been suspended.

Will Addison, who would have been the next centre in line to travel to Japan, is fit again after a hamstring tweak but he must now bide his time. 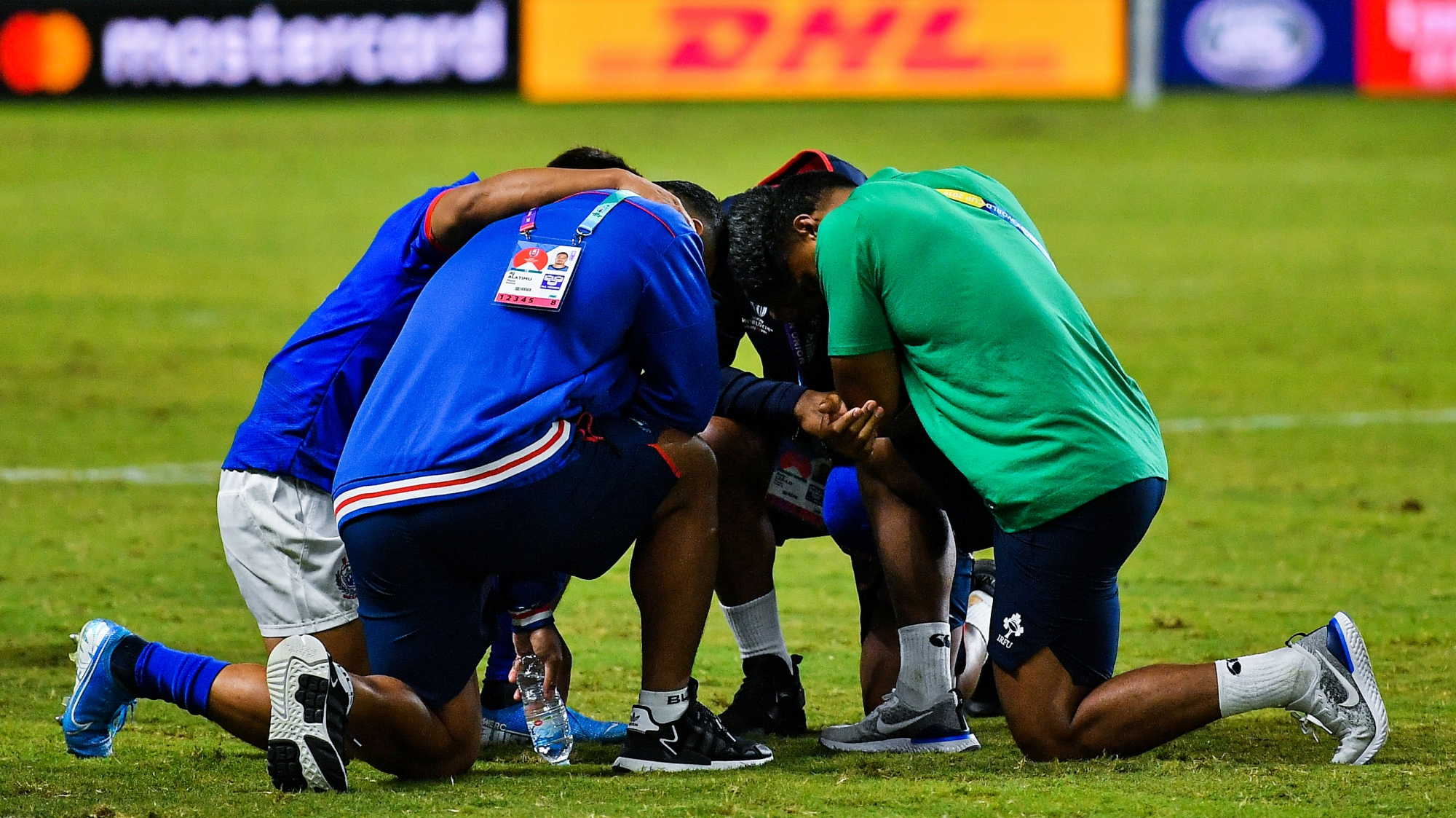 
popular
Jamie Carragher on the two Man United players Erik ten Hag can't trust
"I went up to the Italians and gave them a big auld shoulder" - Paul O'Donovan does it again
Man United have 'decided to sell' promising midfielder James Garner
Wexford Under-20 lights it up as Ferns win their first ever county title
Wexford, Waterford and Kilkenny down some good men as Australia calls
Graeme Souness under fire for calling football a ‘man’s game' while sat with Karen Carney
Luke Chadwick recalls furious Alex Ferguson reaction when he rejected loan move
You may also like
2 weeks ago
“My confidence was on the deck" - Aaron Connolly explains why he has made the move to Italy
2 weeks ago
Every Irish transfer in football, this summer, as several big deals get done
3 weeks ago
Six Irish players make damn impressive 'World XV' that would take some beating
3 weeks ago
The frontrunners for Ireland's 33-man squad for the 2023 World Cup
3 weeks ago
All Blacks media manager explains why Ian Foster appearance was cancelled after Ireland defeat
3 weeks ago
Warren Gatland selects nine Irish players in his strongest Lions XV, right now
Next Page