Brian O'Driscoll: It's unforgivable from Jacob Stockdale, you have to dive

Former Ireland rugby captain Brian O'Driscoll has said that Jacob Stockdale should have dived once he had crossed the line during Ulster's 21-18 defeat to Leinster on Saturday.

Stockdale received the ball off a decoy pass from Billy Burns before rounding the defence, stepping inside Jordan Larmour and powering his way towards the line, however, once there, he failed to touch the ball down with referee Roman Poite deferring to the TMO who ruled no try in favour of Leinster. 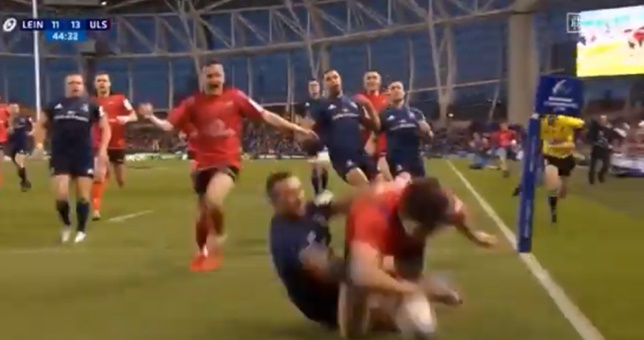 Watch: Jacob Stockdale burns Leinster defence before dropping the ball over the line

O'Driscoll said that it was 'unforgivable' from the 22-year-old and that you can't take any chances in the in-goal area.

"It was brilliantly manufactured by Ulster and again he'd a fair bit of work to do but this unfortunately for Jacob Stockdale is unforgivable," said O'Driscoll on BT Sport.

"When you find yourself over the whitewash, yes there's a player dragging out of him looking to get a challenge in, but you've got to dive.

"You've got to guarantee the ball goes down. There's a risk, and obviously the one that we've just seen, of knocking the ball on or losing it in contact. That does not happen, or at least tends to happen far less frequently, when you dive."

Former Ulster and Ireland flanker Stephen Ferris added that Stockdale took the ball three or four yards past the tryline and that he should have just fell on the ball.

"This, unfortunately for Jacob Stockdale, is unforgivable!"

"He'd done all the hard work, all he had to do was fall!"@BrianODriscoll and @StephenFerris6 weigh in on the moment that shifted the momentum of the whole game...

"You just look where he tried to put the ball down," said Ferris.

"It was four or five yards beyond where the try line was. He'd done all the hard work, all he had to do was fall on the ball or the old Brian O'Driscoll slide the ball down to secure it. It was just something that didn't happen for Ulster and it was a real unfortunate moment for Jacob Stockdale because it was a big turning point in the game."