"When I look back, he’s always the first person that almost pops into my head."

Anthony Foley was a lot of things to a lot of people, even those who never personally knew the man. Barry Murphy played four seasons with Foley, at Munster, and maintained their friendship after his former captain hung up his boots.

A gesture that Foley made after injuries had cut his own career far too short meant the world to him.

Growing up in Limerick, son to rugby-mad Mick Murphy, Barry Murphy dreamed of lining out for Munster at Thomond Park. He was part of the St Munchin's team that won a Munster Junior Cup and had Foley - a past pupil there - come in for a memorable presentation.

The pressure of going on to win the Senior Cup, which proved a bridge too far, and dedicating so much time and effort to the game left Murphy 'resenting rugby' by the time he was 18. "It had gone from that game that I loved to play, to just this massive disappointment and pressure," he reflects. 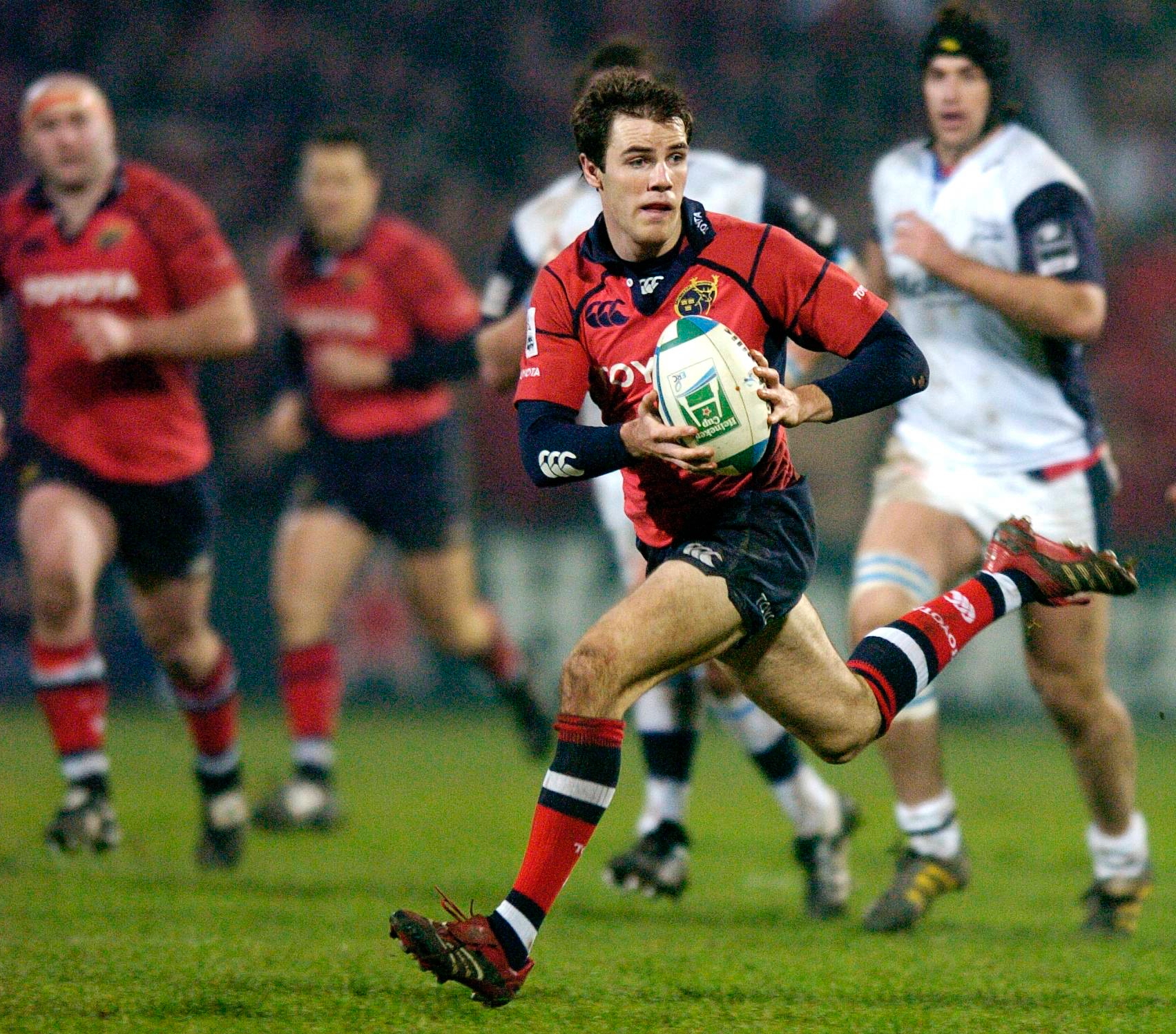 Barry Murphy in action for Munster against Sale Sharks in 2005. (Credit: Brendan Moran/SPORTSFILE)

When Murphy finished school, he went to play U18s with UL Bohs and, playing with his mates again, rediscovered his love of the game. Still, it took some convincing from his father, and his uncle, to come back from a summer away in Boston to give it a dart at Munster U21 trials.

He was on the bench for that Munster U21 team, out at Garryowen, along with Ian Dowling but both men came on at half-time. Both showed enough to get picked for the full U21s and he never looked back. The following February saw him lining out for Ireland U21s and he made his full Munster debut soon after.

All told, Murphy played 73 times for Munster and scored 15 tries. He was part of a Munster squad that won two league and European Cup titles during his time there. He fulfilled his dream, but there was plenty of hardship along the way due to a string of serious injuries that held him back. Murphy was forced to retire from the game, aged 28, in May 2011. At the time, he commented:

"The past seven or eight years have been a wonderful time in my life, playing with Munster. I’ve made loads of friends here in this squad, enjoyed some great times and I wouldn’t trade a moment of it."

One of those friends Murphy made was Foley. On the latest episode of Baz & Andrew's House of Rugby, Murphy recalled what Foley meant to him and how he looked out for him, even after he retired. 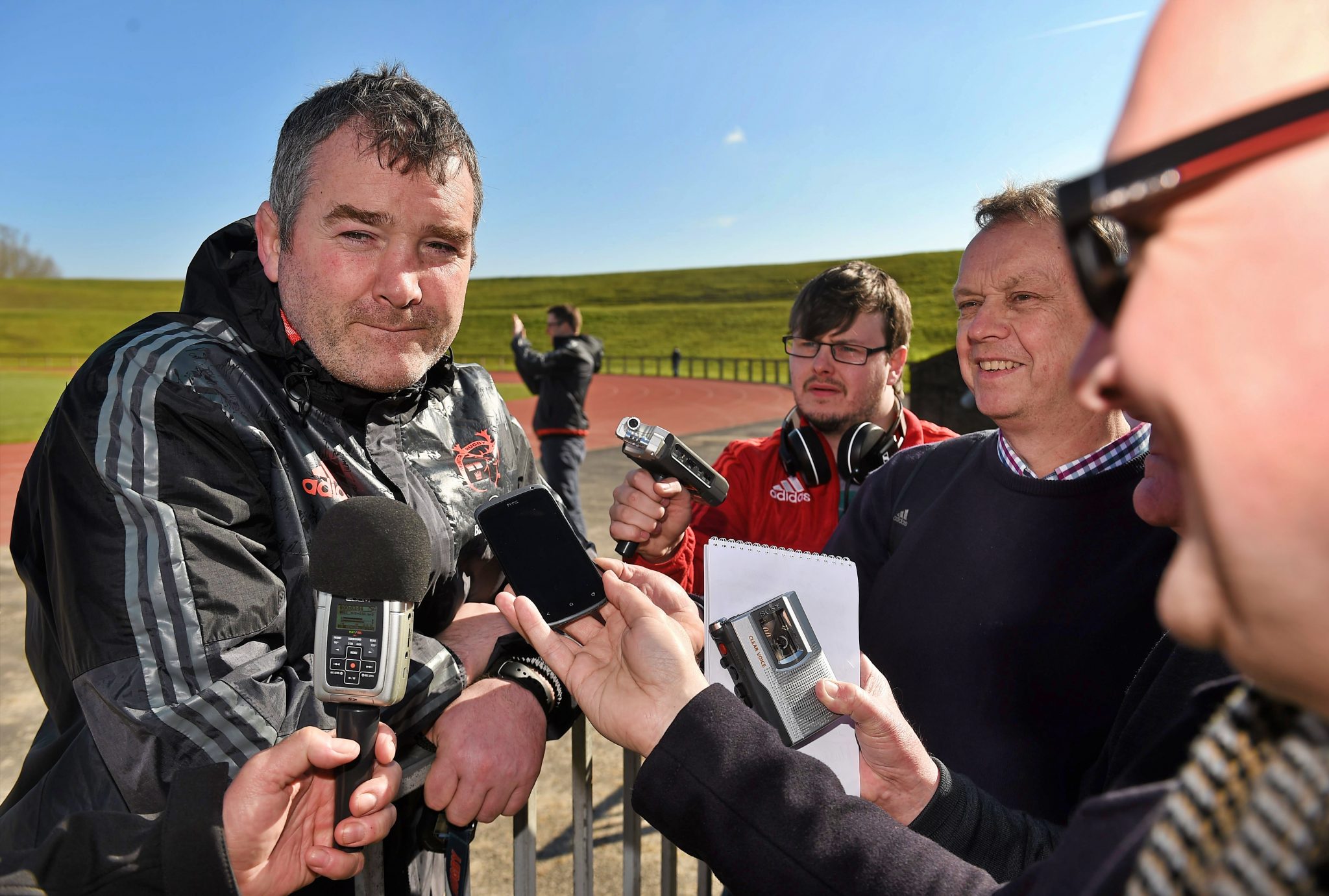 Anthony Foley speaking to reporters during a press briefing at University of Limerick in 2016. (Credit: Diarmuid Greene/SPORTSFILE)

"What a buzz to be involved in that Munster team," Murphy reflected.

"Working with the likes of Paul O’Connell and ROG and, again, Axel, for me, was so integral in that part. And I’d even like to take a minute to just talk about Axel; I’ve never talked about it before, and what he meant to me, and losing Axel a few years ago.

"I’ve never really experienced anything like that. It was so heart-breaking and the only way I can describe it is Axel… I’ve thought about him so much and I’ve thought about what he meant to me in that development part of my life. Did you ever meet someone who… it made me think about how every person has a unique relationship with another person. No-one has the same relationship. We’re all a bit different and the more open you are, the more chance you have of having really genuine relationships.

"And I always felt that he was open to me. As much as he didn’t say much or anything, I felt that I had such a unique relationship with him – that when I’d walk into a room or walk into a café, to meet him, he’d give me a little smile that was enough to say, like, this fella loves me. He loves having me around. And that was all."

Murphy spoke about the final time he met Foley, who passed away in his sleep from an acute pulmonary edema in October 2016 at the age of just 42.

"We used to play soccer on Monday nights," Murphy began.

"When I retired, I was three years into retirement and I found that really hard – processing the fact that I was still only 29, 30 and retiring, and not knowing what I was doing with my life. Axel brought me out to Killaloe to play soccer with him and his mates. Woody [Keith Wood] and Marcus Horan and Ian Dowling. It was Monday night, the best part of my week, we’d go out and play 5-a-side and it was just so nice to be a part of something.

"And then, on Tuesdays or Wednesdays, I’d go into U.L and I’d train, and I’d go up to the café, and Axel could be sitting there, having his coffee. He was obviously going through a tough time with Munster, in coaching, and we’d just have a moment to sit down and have a bit of breakfast. All we’d talk about was playing soccer on the Monday night. He’d be under these weird delusions that he was class at soccer, even though he was absolutely useless!

"But the last time I met him, on that Tuesday, we were chatting away and he just got up and walked out. I thought he was going over to get a cup of coffee, but he just walked out the door without saying goodbye or anything. It was just so Axel. It was so perfect."

That invite to Killaloe, and to play football with some of the old Munster crew, that was Foley's way of reaching out and letting Murphy know he was still part of something. That he would always be part of something.

"So, when I look back, he’s always the first person that almost pops into my head," Murphy continued. "And then Olive and the kids and his parents and his sisters.

"Thinking back on my career, I owe so much to what he did with the likes of Gaillimh and Claw, and ROG and Strings, and how they built that Munster team. And I was so fortunate to be allowed to play with them. And that, to me, is the best part of looking back on my career. It’s those guys and... yeah, very lucky."