Three weeks out from the start of the Six Nations, Andy Farrell will not have enjoyed Saturday's viewing.

Connacht started brightly against the four-time champions before being swept away in the second half.

END_OF_DOCUMENT_TOKEN_TO_BE_REPLACED

Injuries have blighted Connacht's 2019/20 and so it proved again today at The Sportsground as Toulouse left Galway with a try-scoring bonus point and qualified for the last eight of the Champions Cup.

Already without the likes of Quinn Roux, Kieran Marmion, Tom Farrell, Conor Fitzgerald and Sean O'Brien, Connacht lost Ultan Dillane at half-time after what appeared to be an injury to the lock's ribs.

Dillane, along with Fitzgerald, John Porch, Caolin Blade and Colby Fainga'a, has been one of the province's top performers in what has thus far been a tough season. Such was his return to form that the Tralee native was called up to the Ireland training squad of new head coach Andy Farrell, last month.

Dillane [pictured below] looked to be in considerable pain after making a defensive tackle, a few minutes before half-time, and though he played on, he did not return for the second half. With Marty Moore (ankle) and Will Addison (calf) limping out of Ulster's 29-13 loss to Clermont, earlier in the day, it means Farrell may be without three internationals for the 2020 Guinness Six Nations opener against Scotland [on February 1]. 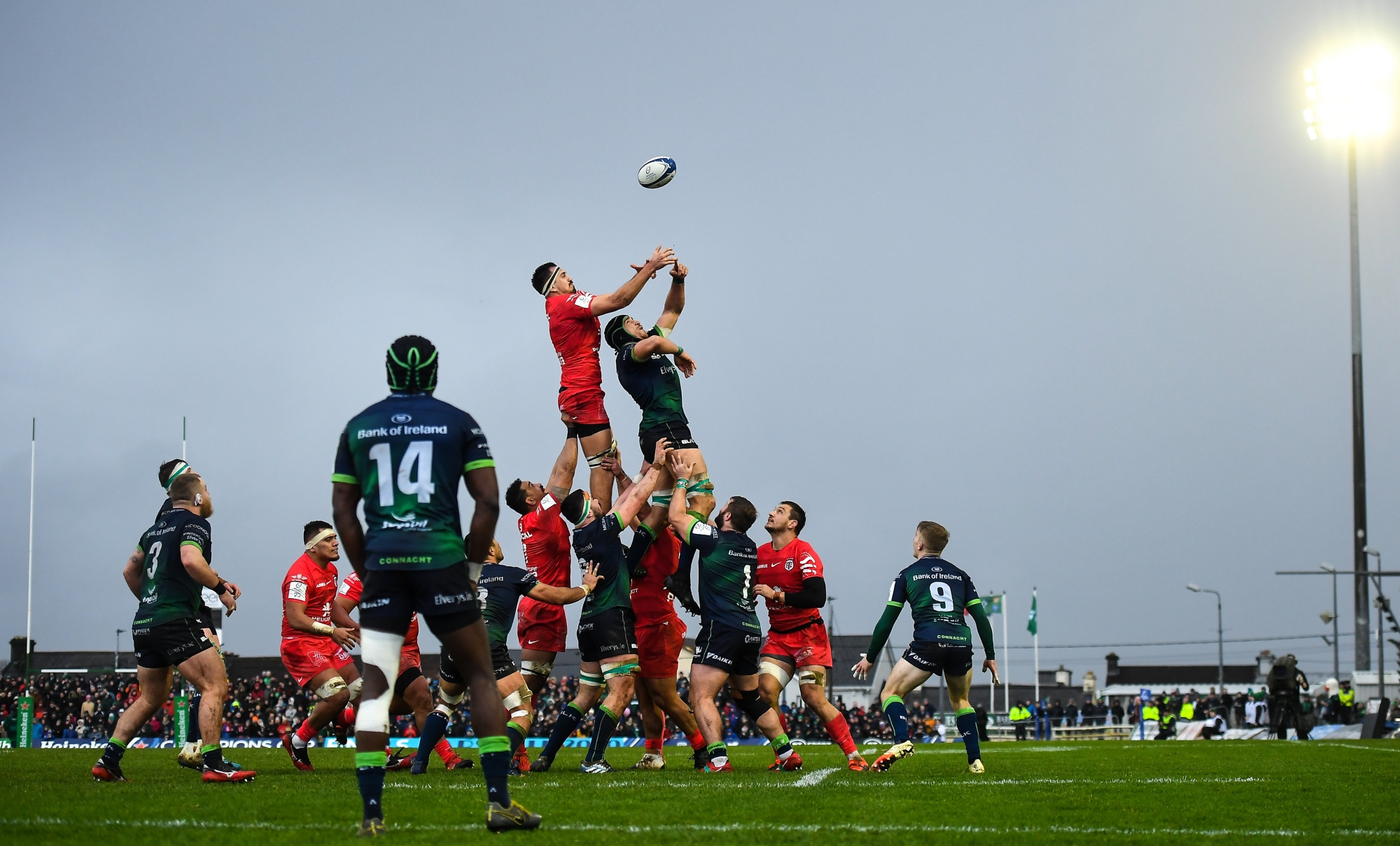 Ultan Dillane wins possession from a line-out ahead of Florian Verhaeghe of Toulouse during the Heineken Champions Cup Pool 5 match at The Sportsground in Galway. (Photo by David Fitzgerald/Sportsfile)

END_OF_DOCUMENT_TOKEN_TO_BE_REPLACED

Andy Friend's side started off brightly and went 7-0 ahead when, after intense mauling pressure, Connacht were awarded a penalty try.

Having started the game on only eight points in the pool standings, an an away date with Montpellier, Connacht would have been seeking the four tries necessary to get an extra bonus point. Instead, however, it was Toulouse that struck next. Jerome Kaino looked to have been held up just shy of the Connacht tryline but referee Luke Pearce, who had yellow-carded Fainga'a minutes earlier, was happy to award to try.

END_OF_DOCUMENT_TOKEN_TO_BE_REPLACED

Florian Verhaeghe then blew a handy try-scoring chance after blocking down a Matt Healy kick but the French side got their second score when Julien Marchand dotted down just before half-time.

The death-knell arrived for Connacht on 45 minutes when Jack Carty had a clearing kick blocked down, after scrumhalf Stephen Kerins held onto the ball too long, and former player Pita Ahki pounced on the loose ball. With that, Blade replaced Kerins and Connacht set about getting a try to force themselves back into the match.

Toulouse were reduced to 13 men in the final 10 minutes when Yoann Huget (yellow card) and Zack Holmes (red) were sent from the field for a set of poor tackles on Tiernan O'Halloran. Still, error after error spoiled any dwindling hopes of Connacht even drawing level or, at the very least, getting a losing bonus point.

OUR MAN OF THE MATCH: Jerome Kaino (Toulouse)


popular
The four stone-cold certainties for All-Stars even as early as this
Kylian Mbappe reportedly wants PSG to sell Neymar
Gavin Coombes one of four Irish players to push themselves into Test picture
"He's actually smiling putting the ball over the bar. He should nearly be fainting." - Ryall on Limerick's legacy
Eamon McGee just couldn't help himself with Armagh-melee tweet
"The economy was one of the big reasons" - Cadogan's move from an electrician to personal training
Richard Keys tears into Gary Neville over 'nonsense' new book
You may also like
2 months ago
Ronan O'Gara on seven Ireland players that have him excited, ahead of New Zealand tour
3 months ago
The Top 20 rugby players in Ireland right now
3 months ago
Marlie Packer grabs super hat-trick as England demolish Scotland
3 months ago
Hugo Keenan's latest achievement is just reward for a player that keeps getting better
3 months ago
Five Irish players make Six Nations 'Best XV' picked by Sean O'Brien and Alex Goode
3 months ago
"My view isn't a popular view - I think Eddie Jones is a very smart coach" - Ronan O'Gara
Next Page