"I want to be myself... Imitation's not a great thing, you know?"

That was the response of Andy Farrell when he was asked what had changed for him since he took over from Joe Schmidt as head coach of Ireland.

Farrell is the new man in charge of Ireland but he is following on from Schmidt in keeping as low a profile as possible. Just before Christmas, at the IRFU's swanky Performance Centre, he held a closed door briefing for select outlets. He was at Wednesday's launch of the 2020 Guinness Six Nations, in London, and he flew out to Portugal with his 37-man squad soon after.

END_OF_DOCUMENT_TOKEN_TO_BE_REPLACED

The Ireland coach will, therefore, not give his first public press briefing until after he has led the team for the first time, against Scotland, next Saturday.

At the championship launch, Farrell fielded more than his fill of questions about coming up against his son - Saracens and England outhalf Owen Farrell - during the championship.

The Wigan native played with and coached Owen when they were both at Saracens and he coached him again when he was assistant to Stuart Lancaster at England. As Ireland assistant coach he came up against Owen's England in three Six Nations campaigns and a World Cup warm-up last summer. They are well used to facing off against each other so that could be why Farrell bristled at the many questions about his son that came his way.

"For the first time?" Farrell incredulously responds. "Not really. I've coached against him many a time."

END_OF_DOCUMENT_TOKEN_TO_BE_REPLACED

"Not much [is going through my head] other than the job in hand, really. It's nothing new to us. It's always been that way; it's always been about business. We're involved in a professional sport. We've got a job to do and that's the way it always has been." 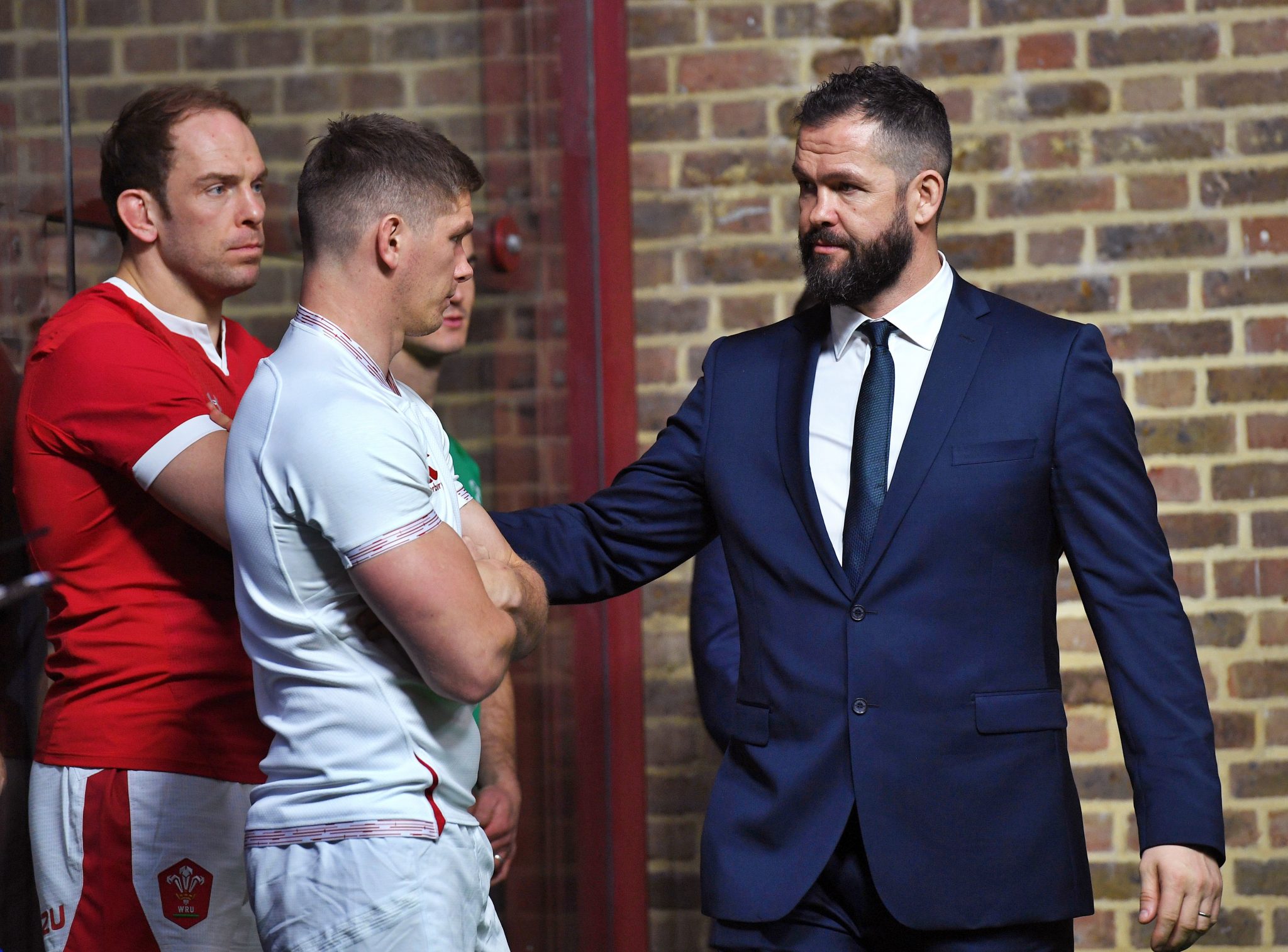 This championship marks the first time Farrell has occupied the top seat. He has brought in five uncapped players to his first Ireland squad and enlisted Mike Catt as backs coach and John Fogarty as scrum coach. Rory Best has retired and the captaincy has moved on to Johnny Sexton, and Rob Kearney is not involved. Other than that, the first real changes we may see could be in how Farrell's Ireland play the game.

END_OF_DOCUMENT_TOKEN_TO_BE_REPLACED

"I've been lucky enough to sit in that [assistant coach] seat for the best part of 10 or 11 years," he tells us, "but, looking at the head coach role, that has always been an aspiration of mine. I've worked hard to get here and whilst I'm sat here I want to enjoy it, you know? I'm going to make sure that I do as well."

The most animated Farrell gets in his short chat with us is when he is asked what he will bring to Ireland that differs from Schmidt.

"Well, I want to be myself.

"I've got an idea on how I want to play the game and I want my team to stand for those ideas. We're going to make sure that we stand for something properly, first and foremost.

"Every coach wants to put his own stamp on his team. We need an identity and hopefully that'll be evident as the games unfold."

In recent championships, the likes of Sexton, Keith Earls, CJ Stander and Jacob Stockdale have stepped up with individual plays that have clinched big games for Ireland. Farrell is wont to name any one player, or two, that could be 2020 matchwinners.

"Hopefully the team will be the matchwinner. It won't be down to one individual, although we've got some brilliant individual players. It will be through the work ethic of the team and, as I've said before, by standing for something. Hopefully that amalgamates to somebody scoring the try and somebody getting the headlines, but we're a team first and that's the mentality I would like."

Asked what head coach has had the biggest influence on him, so far, Farrell re-adjusts and argues it would be 'unbelievably unfair' to make him single one out.

Rather than mimicking a coaching style, Farrell says he has picked up a lot over his 28 years in both rugby union and league. He has taken bits from each coach he has worked with but stresses he will be 'putting my own twist on it' for Ireland.

"Imitation's not a great thing, you know? That's more like acting."

Whatever we get with Andy Farrell, you can be assured that it will be as real as it is full-on.

Barry Murphy and Andrew Trimble are joined in the House of Rugby studio by Jerry Flannery as they look back on the final round of Champions Cup pool games, ahead to Ireland's 2020 Guinness Six Nations under Andy Farrell and discuss Saracens' relegation.


popular
Get him a tuxedo, give him the All-Star and for crying out loud, someone bring that man out to America
Fans react to Tottenham Hotspur's 'brilliant tease' for Richarlison signing
Southampton pay tribute as Shane Long leaves the club after eight years
Tiernan Kelly and three other players hit with ban following tunnel brawl
The four stone-cold certainties for All-Stars even as early as this
Quiz: Name the players these famous footballers played alongside the most times
Eamon McGee just couldn't help himself with Armagh-melee tweet
You may also like
3 months ago
Ronan O'Gara on seven Ireland players that have him excited, ahead of New Zealand tour
3 months ago
The Top 20 rugby players in Ireland right now
3 months ago
Marlie Packer grabs super hat-trick as England demolish Scotland
3 months ago
Hugo Keenan's latest achievement is just reward for a player that keeps getting better
3 months ago
Five Irish players make Six Nations 'Best XV' picked by Sean O'Brien and Alex Goode
3 months ago
"My view isn't a popular view - I think Eddie Jones is a very smart coach" - Ronan O'Gara
Next Page