"It's about living on the edge."

We would like to think Ireland head coach Andy Farrell deliberately dropped in the Aerosmith song reference into today's Six Nations launch on purpose. Heading into the championship, Farrell is in good form.

With France hit by Covid issues [10 players released from camp after feeling unwell], England dealing with injuries and the Welsh regions in a rut, Ireland are well placed for the 2022 Six Nations.

END_OF_DOCUMENT_TOKEN_TO_BE_REPLACED

Asked if he was "confident" of Ireland's chances of a first title since 2018, though, and Farrell demurred. We sometimes scoff when you hear a coach or player talking about a pure focus on the next game. With the Six Nations, that makes all the sense in the world. Winning campaigns are built on momentum. You win your first game, no matter what way or how ugly it gets, and you build from there.

All four Irish provinces have reached the Champions Cup knock-out stages for the first time, the national team is on an eight-game winning streak and, today, Farrell had some positive fitness updates to share. 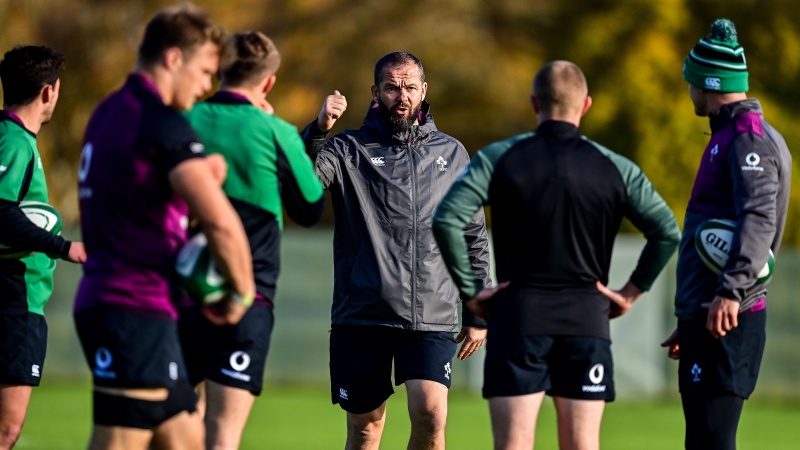 END_OF_DOCUMENT_TOKEN_TO_BE_REPLACED

Farrell was not asked specifically about Ryan, the Ireland vice captain to Johnny Sexton, but he had good news on the other three.

"We expect all, bar, Iain Henderson to be training fully with us by the end of the week. Iain Henderson, that's not to say that he's out of the Wales game yet. We'll take it day-by-day with him and see how it goes."

When it was later commented upon that Henderson may not be 100% for the Wales game, on February 5, a laughing Farrell cut back in - "I didn't say that!" On Carbery, the Ireland coach commented:

"Joey has been keeping fighting fit, from week two after the injury to his elbow. He's fit as a fiddle and has been doing all the ball skills. The only thing he's had to wait for is getting the all-clear to get back into contact. He's had that now, so he's all systems go."

END_OF_DOCUMENT_TOKEN_TO_BE_REPLACED

One confirmed injury loss to the squad, at least for the opening two rounds of games, is James Lowe. Farrell says the Leinster winger is "absolutely gutted" to miss out after a hamstring injury, but hopeful he can feature at some stage of the championship.

As for the two uncapped players in the squad, both Sexton and Farrell talked up the form of Connacht winger Mack Hansen and versatile Ulster back Mike Lowry.

The coach and captain left their media rotation at the virtual Six Nations launch laughing and smiling. We caught them at a good time.


popular
Talksport presenter puts Martin O'Neill to the pin of his collar over Declan Rice and Jack Grealish
Gary Neville sticks up for Ronaldo as contextless pictures and videos taken as gospel
Ariel Helwani shares Paddy Pimblett WhatsApp messages as spat becomes public
World Cup Power Rankings: The top eight pundits of the tournament so far
Ballyhale's Colin Fennelly felt Ballygunner's victory speech was disrespectful
World Cup Power Rankings: The top 10 players at the tournament ahead of the quarter-finals
Rory McIlroy explains 'falling out' with Shane Lowry that lasted a few years
You may also like
6 days ago
Shay Given on how far Ireland could've gone at the 2002 World Cup with Roy Keane in the team
1 week ago
From Ireland to Argentina: Alexis Mac Allister's Irish roots explained
1 week ago
Former England international admits he wishes he had played for Ireland
2 weeks ago
Two baffling omissions as four Ireland stars make World Rugby 'Dream Team' of the Year
2 weeks ago
Josh van der Flier claims World Rugby Player of the Year at Monaco ceremony
2 weeks ago
"Highlight of my Ireland career" - Behind the scenes as Jack Crowley and Ross Byrne covered for a legend
Next Page