Joe Schmidt has the perfect opportunity to go out on a high.

Schmidt has positioned his Ireland team perfectly to challenge for next year's World Cup and confirmation arrived on Monday morning that Japan 2019 will be Schmidt's final tournament in coaching.

Farrell, who joined the Ireland set-up in 2016 ahead of the summer tour of South Africa, has been credited with a large portion of the national team's success in recent years.

"It is a privilege to be considered for such a prestigious role," Farrell said. "I have learned a lot from Joe over the past few seasons and I will continue to learn from him over the next year as the coaching group and players focus on competing in two huge tournaments in 2019." 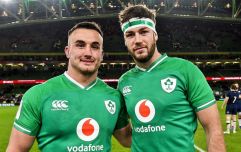 END_OF_DOCUMENT_TOKEN_TO_BE_REPLACED

Schmidt has already earned legend's status for his heroics with the Irish team but he would leave a matchless legacy if he manages to carry 2018's success into next year's Six Nations and World Cup.

After that, it will be in Farrell's hands but Schmidt has assured concerned supporters that those hands are safe.

"The coaches have been fantastic to work with and Andy has made a big impact since coming into the group," Schmidt said of his successor.

"His ability to lead and his understanding of the game will ensure that the group will continue to move forward."