Andrew Conway moment of pure brilliance seals it for Munster

Rory Scannell and Andrew Conway were the two star men for Munster. At least one of them made the plane to Japan.

Munster made hard work of it against a dogged Ulster side but they got the Guinness PRO14 victory that should put them in good stead before the Champions Cup dominates four of the next five weekends.

END_OF_DOCUMENT_TOKEN_TO_BE_REPLACED

John Cooney put Ulster 3-0 ahead before a powerful CJ Stander leg drive saw Munster go 7-3 ahead. Stander took the ball some five yards from the tryline and there were four Ulster players in his path but he was backed up by a couple of teammates and heaved himself under the posts.

There was no end of niggle in the first half as both sides got in respective faces when penalties were won, turnovers conceded and whatever yer having yerself. Jack McGrath doled out some smack talk after one Alby Mathewson error and was then on the receiving end after a scrum penalty went Munster's way. 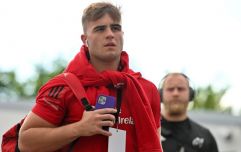 END_OF_DOCUMENT_TOKEN_TO_BE_REPLACED

A Cooney penalty reduced Ulster's arrears to just a point but Munster finished the half strongly and were rewarded for their efforts with a Rory Scannell try after a smart Tyler Bleyendaal (on for the injured JJ Harahan) pass to Chris Farrell. HALF-TIME: Munster 15-6 Ulster

Ulster looked up against it but the hosts gifted them a way back into the game with some sloppy errors and, off the back of a scrum, Rob Herring backed himself and beat the opposition half backs to the tryline. When Cooney lapped over a 58th minute penalty, Dan McFarland's side were 16-15 ahead.

Mike Haley shelled a simple pass to scupper a promising attack but Ulster could not keep hold of the ball for long enough to cause troubles for Munster. In the end, the game was settled by the one moment of true brilliance in the game.

Bleyendaal popped an inside pass to Conway, who was taking a smart line, and the winger did the rest, burning Matt Faddes and beating Jacob Stockdale to the tryline:

END_OF_DOCUMENT_TOKEN_TO_BE_REPLACED

Bleyendaal converted but missed a penalty to seal the victory, and deny Ulster a losing bonus point. Munster, ultimately, did not regret that as Stuart McCloskey's intercept and charge was halted by Scannell before Kieran Treadwell knocked on.

Conway was forced to sit out the Ireland's World Cup quarter final, in Japan, despite looking to be his country's best winger. His performance, and score, shows up Joe Schmidt's error in not starting him against Samoa and New Zealand.

OUR MAN OF THE MATCH: Rory Scannell (Munster).


popular
Jurgen Klopp reacted like everyone else to Darwin Nunez headbutt red card
Jamie Carragher on the two Man United players Erik ten Hag can't trust
"I went up to the Italians and gave them a big auld shoulder" - Paul O'Donovan does it again
Carragher and Neville brutally name Man United's biggest transfer flops since 2013
Man United have 'decided to sell' promising midfielder James Garner
Wexford Under-20 lights it up as Ferns win their first ever county title
Graeme Souness under fire for calling football a ‘man’s game' while sat with Karen Carney
You may also like
1 month ago
Irish provinces discover their pool stages fate for Champions and Challenge Cups
2 months ago
"An unbelievably special place" - Former England star Charlie Hodgson on Thomond Park experience
2 months ago
"I don't want to stick the knife in" - Are Leinster in Munster's heads?
2 months ago
United Rugby Championship quarter finals confirmed as Leinster beat Munster
2 months ago
Alex Kendellen takes exception to Harry Byrne reaction to lusty tackle
3 months ago
Jack O'Donoghue and Alex Kendellen play themselves into Ireland's summer plans
Next Page