"We want to play to space because we've got some really exciting backs."

Andrew Conway was having another cracking game for Ireland, against Wales, but his bonus point try really put a bow on it.

The Munster winger was one of the few in Joe Schmidt's World Cup squad to emerge with credit, even after the Kiwi opted to exclude him from his match-day 23 for the quarter final exit to New Zealand. He returned to Munster and quite literally hit the ground running as he scored a cracker in the Guinness PRO14 against Ulster.

END_OF_DOCUMENT_TOKEN_TO_BE_REPLACED

There was a 75-metre intercept try against Racing 92 even if it was in a losing cause. Most Irish rugby supporters had Conway in their starting XVs for the Guinness Six Nations, leaving Jacob Stockdale and Keith Earls to scrap for the final wing spot. It was another steady sign of progress for Conway and Andy Farrell confirmed as much when he handed him the 14 jersey for the Guinness Six Nations opener against Scotland.

Conway had a decent outing against the Scots but Ireland were not at their best and struggled to get the ball into the hands of their back three. One week on, against Wales, it was much better. Ireland's back three had 33 carries for 185 metres with seven line breaks and two tries.

"It was brilliant, it had a bit of everything," Ireland captain Johnny Sexton declared. "It had some of the stuff that we had spoken about last week that we didn’t put out there against Scotland.

"When we get the ball in our back-three’s hands, something can happen and they showed that. They stuck to the tactics really well in terms of when we got on the edge. The temptation is always to run but they got us field position at times brilliantly and some our shape was really good - what we’ve been working on - and we won." 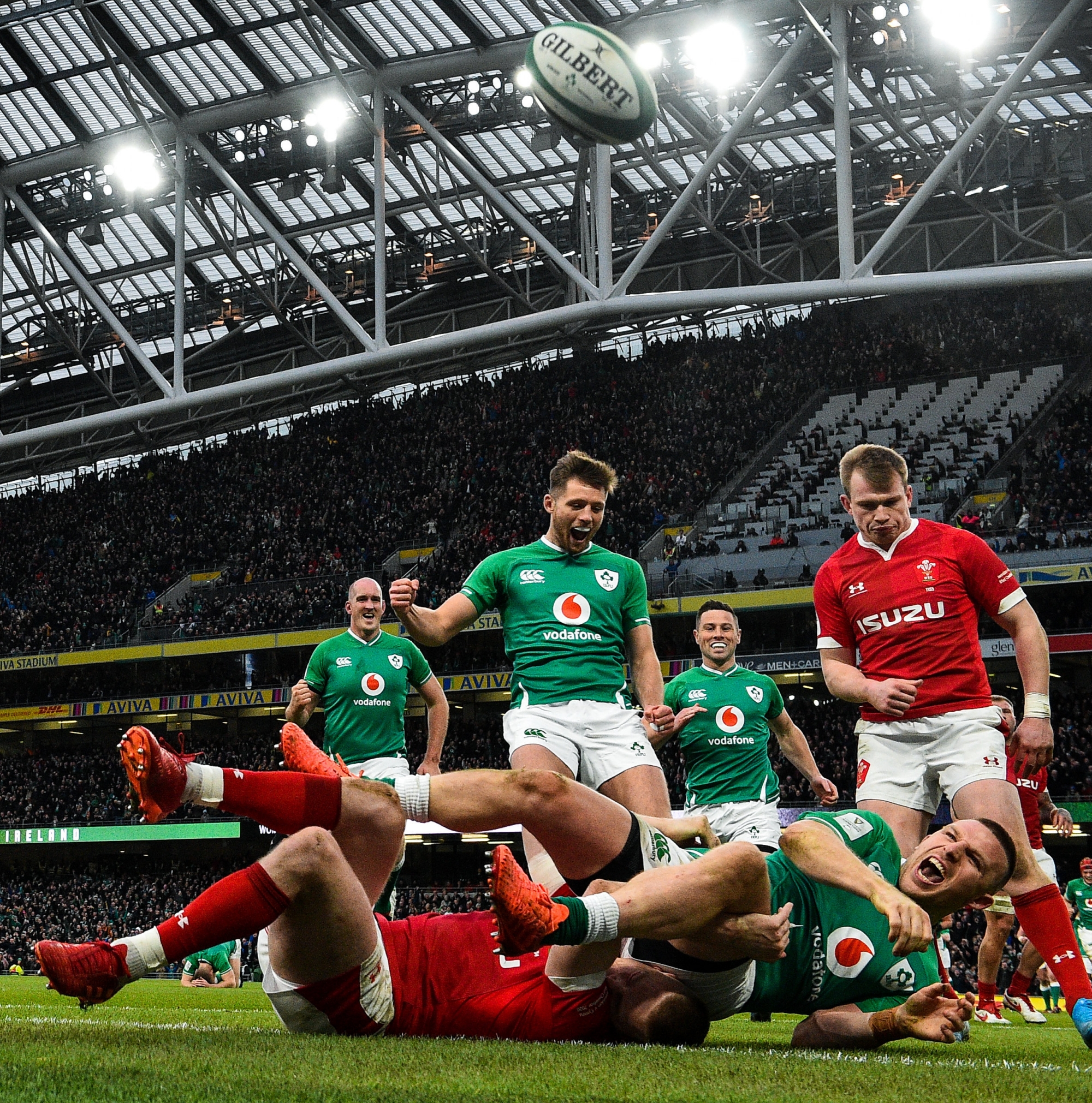 END_OF_DOCUMENT_TOKEN_TO_BE_REPLACED

Conway was already pushing CJ Stander hard for the man-of-the-match award when his patience was rewarded with the bonus point try. Ireland's forwards drew in bodies and Conway stayed out on his wing to stretch the Welsh defence.

That paid off when Jordan Larmour put him away and the Munster winger did the rest. It was his ninth try in 19 Tests (12 starts) and was a fitting bow to an all-round great performance. Asked about Conway and his harrying of the Welsh all afternoon, head coach Andy Farrell said:

"Well, you know, a kick is only as a good as its chase. He was outstanding both sides of the ball, wasn't he? As far as the high-ball was concerned, we want our wingers to go 100% and he certainly typified that. I thought Jacob did the same on the other wing as well.

"Johnny was right, we want to see space and we want to play to space because we've got some really exciting backs. We like to give them one-on-ones but I thought we actually created some space for them to play into some holes in that first half which was very pleasing.

"You saw a little bit of counter-attack as well from time to time with the guys which is a work-in-progress for us. The back-three will start to get excited even more so on the back of that."

END_OF_DOCUMENT_TOKEN_TO_BE_REPLACED

In terms of Test rugby, Conway was a late starter. He was 25 and a half when he made his Ireland debut, in 2017, and he has never started three Test matches in a row.

Conway's start against the Welsh equalled his longest streak of two (he started against Wales then Scotland in autumn 2019) but he should break that in Ireland's next outing. On February 23, Ireland face England and there is a Triple Crown at stake.

Andrew Conway will surely be one of the first names on the team-sheet.

Ronan O'Gara and Shane Williams drop into the House of Rugby studio for a chat with Barry Murphy, Andrew Trimble and Jerry Flannery. The gang preview the Guinness Six Nations clash between Ireland and Wales, talk Andrew Conway's form and Matt Williams proves to be a legend during a phone-call forfeit.