You had to feel for Andrew Conway and Rob Herring. With the rest of the defeated Ireland team packing up and boarding buses to head to the airport, they had to sit, this morning, and pick back over the scabs of last night's loss to France.

Herring and Conway did not have any huge errors or lapses of concentration at Stade de France, on Saturday, but neither went beyond themselves to leave their marks on a game that got away from their side in the second half.

END_OF_DOCUMENT_TOKEN_TO_BE_REPLACED

Given the lateness of the fixture (9:05pm kick-off in Paris) it was after midnight when Andy Farrell and a defensive Johnny Sexton spoke with the French and Irish media. The IRFU took the decision to stall the player interviews until Sunday morning. And so we got Herring and Conway trying their best but still pretty raw about their 35-27 loss.

Herring gave it a stab but much of his comments were about needing to review the game properly before commenting in depth on in-game situations. Asked why the Irish lineout faltered badly in the final quarter of the game, he offered:

With Conway, though, we had a more frank and honest appraisal of what went wrong for a championship-chasing side that were 10-7 up after 29 minutes only to fall away badly thereafter.

END_OF_DOCUMENT_TOKEN_TO_BE_REPLACED

Asked what was the one area Ireland really needed to be better in, Conway replied, "Taking our chances, I suppose, is the one that sticks out from last night. That’s across the board, from 1 to 15, and 16 to 23 when the lads came off the bench. When we put ourselves in good positions, that we take the opportunities and that will have us in the mix going into the last quarter of the game against the big teams." 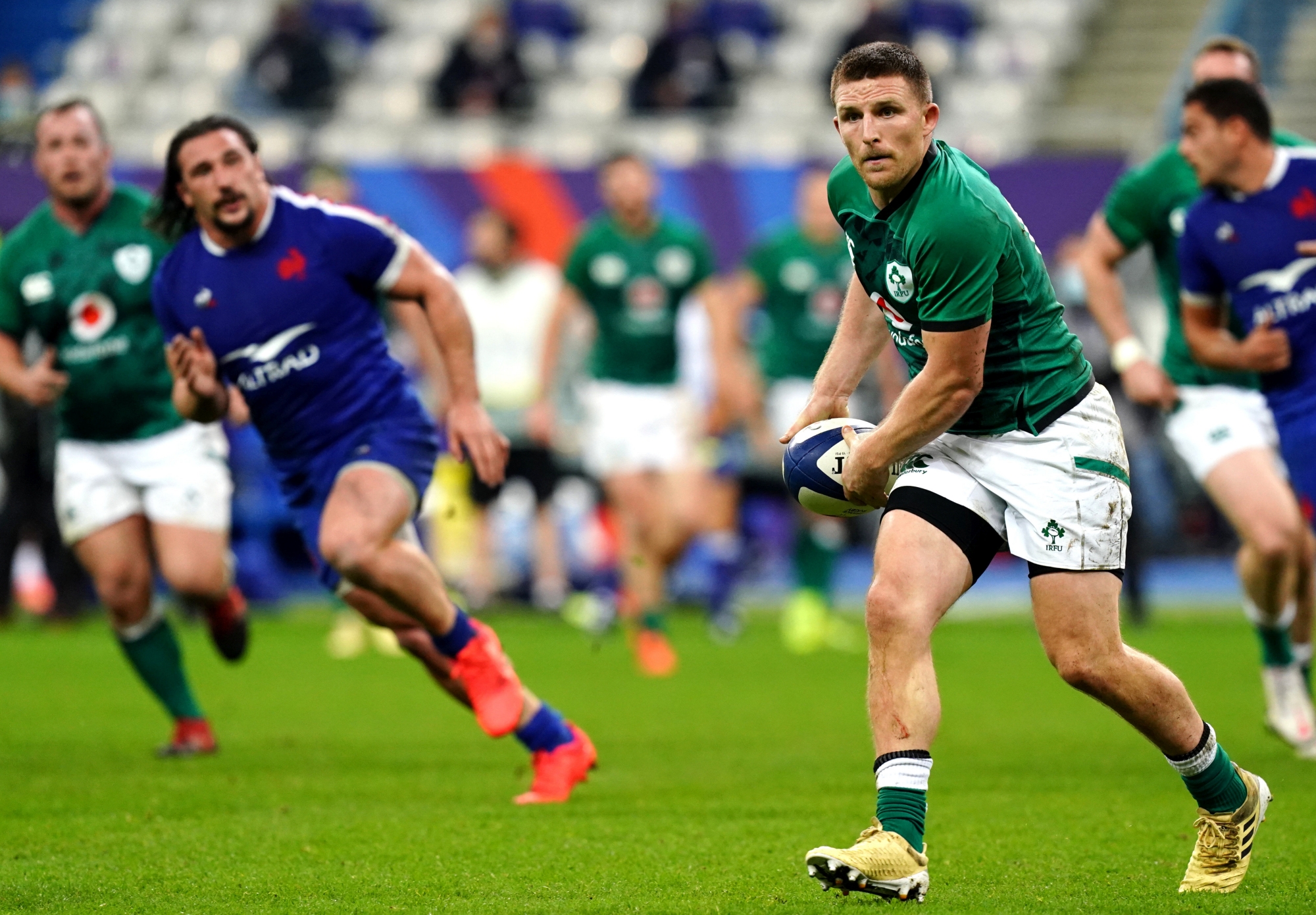 Andrew Conway throws a pass during the Guinness Six Nations game between France and Ireland at Stade de France in Paris. (Photo by Sportsfile)
Advertisement

Conway only got his hands on the ball, in an attacking sense, twice and found it hard to get into the game. He stuck all six of his tackles and was busy on the kick-chase, but he held his hands up for his role in France's killer third try.

END_OF_DOCUMENT_TOKEN_TO_BE_REPLACED

On 43 minutes, Sexton put up a steepler that Conway made good ground under. He made an all-or-nothing leap for the ball, thinking he could win it outright, but claimed only fresh air. Anthony Bouthier pouched the catch and Conway, the right winger, was out of the picture.

Bouthier got a pass away to Romain Ntamack (circled below) and he found Gael Fickou on the left wing before continuing his run. Fickou outpaced the covering Irish forwards - Doris, Porter and Herring - and put a chip over the top before Sexton took him out. Ntamack (yellow line) and Antoine Dupont (red line) were steaming after it. 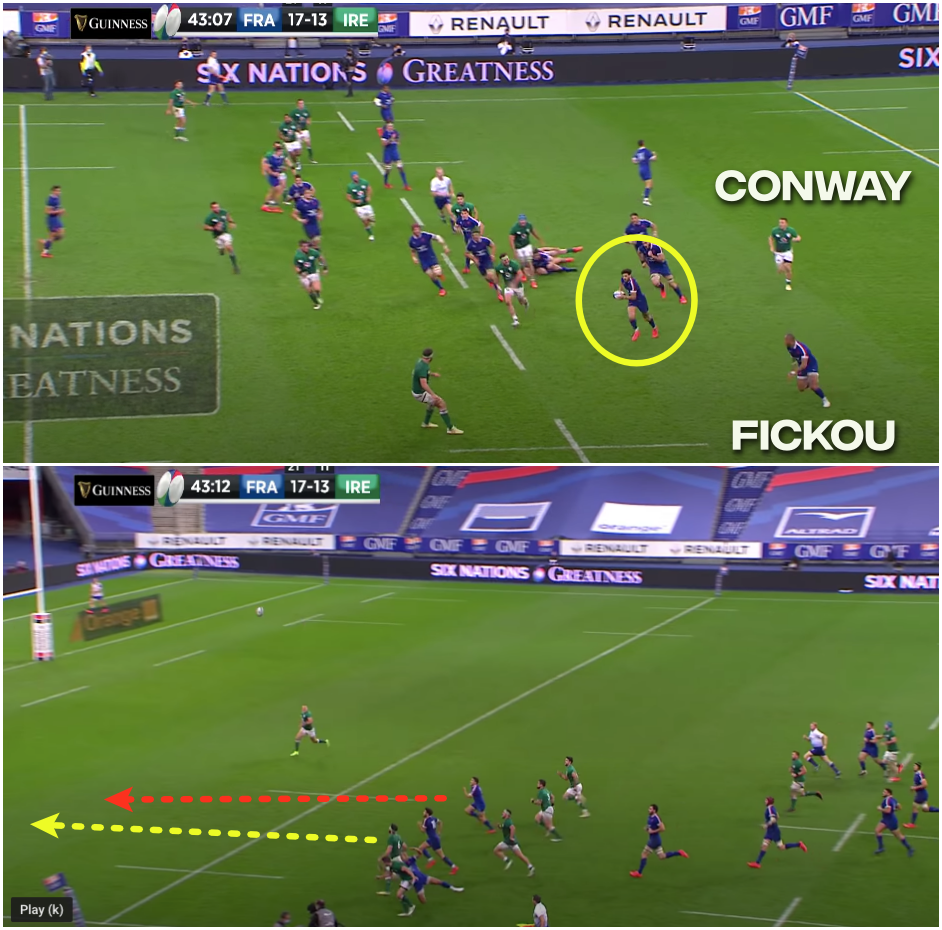 Dupont arrived to the bouncing ball ahead of Jacob Stockdale and get a superb pass away, up and over Caelan Doris, to tee up Ntamack for the score.

From Bouthier catching the Sexton kick to Ntamack crossing over for the score that made it 22-13 only took 13 seconds. It was a costly snatch of time and Ireland's hopes of winning, and with six points to spare, looked forlorn. On facing France in broken play, and that score, Conway said:

"We know the calibre of players we're playing against and we know that if we give them easy ball like that one you're talking about... I'm going after it but I'm not even getting in the contest to even make it a 50/50 or make it even hard for the receiver (Bouthier) and then you get punished, and that's the level you're at.

"So that's probably the most disappointing thing, really, the instances like that where you don't necessarily mind where you make it tough for teams, where they get in in the corner, or there's a piece of magic where you say, 'Fair play to you'. But it's whenever you don't put your best foot forward in your instances where you are playing some of the best teams in the world, and they're going to punish you, like they did."

After fielding another few questions, and being open about Ireland's high error count, it was time to go and catch that plane. There are few real positives to take right now, save Ireland getting into a position to win the championship thanks to solid home form, but the Munster winger was already looking forward to the Autumn Nations Cup.

"It’s a new world we’re living in at the moment and the Six Nations is finishing on Halloween night and we’ve a new tournament that no-one’s ever played in before," he said. "So you’ve got to look at the positives all the time in life."


popular
From Ireland to Argentina: Alexis Mac Allister's Irish roots explained
World Cup 2022 Day 12: All the major action and talking points
France demand FIFA change result of World Cup defeat over 'rule break'
Ronaldo finally reveals why he got that hideous haircut
The World Cup 2022 team of the tournament so far
Argentina reach World Cup last-16 with convincing win over Poland
"Nowadays, even if I don't hit a ball, I don't care as long as we win" - Gleeson learning from the past
You may also like
10 hours ago
From Ireland to Argentina: Alexis Mac Allister's Irish roots explained
6 days ago
Former England international admits he wishes he had played for Ireland
1 week ago
Two baffling omissions as four Ireland stars make World Rugby 'Dream Team' of the Year
1 week ago
Josh van der Flier claims World Rugby Player of the Year at Monaco ceremony
1 week ago
"Highlight of my Ireland career" - Behind the scenes as Jack Crowley and Ross Byrne covered for a legend
1 week ago
Bundee Aki reminded us all of his best qualities, on a night Ireland couldn't do without him
Next Page