We're reaching a stage in rugby where the dominant scrum can be spotted within the first few minutes.

One team gets on top, and the trend continues until the hour mark when fresh legs come on, but by that stage, the game is often gone.

Sunday's game in Marseille was a bruiser for the tight forwards, and an absolute ding-donger. 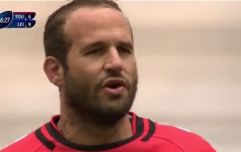 END_OF_DOCUMENT_TOKEN_TO_BE_REPLACED

Like two fighters, they respectively shared round after round, Leinster taking a scrum or two, and then Toulon hitting back.

It didn't help the flow of the game that there were so many scrums. Excluding resets there were 25 in total, 20 of which came in the original 80 minutes, almost double the average you see in top-tier matches.

With so many scrums to monitor, and so much going on in each one, it was an incredibly difficult afternoon for Wayne Barnes, and despite our pre-match concerns and criticism of him in the past, he seemed to be on the ball with his scrum refereeing.

He did miss things here and there, but was consistent in what he penailsed and didn't penailse, a trait he's often lacked.

After struggling against Wasps, Toulon tried to set down a mark on the day's first scrum.

As we can see below, here is how the packs lined up. Note the yellow line running through the midway point of the scrum.

Toulon's plan was to drive over the ball rather than hook it, and they got away with a very early push. 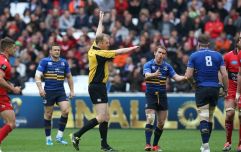 Sean O'Brien on Wayne Barnes: "You can't say anything to that man"

END_OF_DOCUMENT_TOKEN_TO_BE_REPLACED

With Sebastien Tillous-Borde about to feed, the begin to drive, and by the time the scrum half actually puts the ball in, they've marched Leinster back a couple of feet.

The early shove catches Leinster off-guard, and as a result they are immediately on the back foot. As a result, Mike Ross tries to stem the flow by standing up, while Xavier Chiocci is moving relatively straight.

Toulon also got the better of Leinster on the second scrum of the day, and this time Leinster were lucky to avoid giving away a penalty.

Again we'll look at the initial view as a reference point. This time, watch Jordi Murphy, who will slip his bind and illegally drive into the front row.

Note how he's bound legally to the scrum, with one arm around the second row. 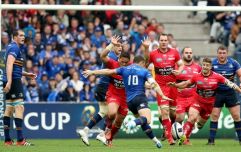 Analysis: Leinster could have done so much more for Jimmy Gopperth's drop goal

END_OF_DOCUMENT_TOKEN_TO_BE_REPLACED

But once the ball is fed, Murphy slides up and binds onto Ross. While the rules state a flanker is allowed to drive into the scrum at any angle, he must remain bound with one arm to the second row of the scrum at all times.

We can see that he begins to drive in on Chiocci, trying to force him into a collapse. While the angle is legal, he now seems to be bound around Ross, rather than Mike McCarthy.

Against Bath, Leinster hit back after two sloppy early scrums, and they did exactly the same thing on Sunday.

They were unlucky not to win a penalty after Chiocci caved in at an angle on Mike Ross, the Leinster tight-head doing extremely well to keep the scrum stable.

Here we can see the initial setup, with he and Chiocci perfectly aligned...

But watch what happens when the ball is fed. Chiocci begins driving perpendicular to Ross, who maintains a straight and square body position.

Leinster do get their penalty on the next drive, and while Barnes was well within his rights to penalise Chiocci for driving up, Sean O'Brien ran the risk of being penalised himself, after slipping his bind.

The most frustrating about this is that Ross was in control of the scrum at the time, and there was little to be gained from O'Brien's point of view.

Here we can see the scrum from behind. O'Brien has no bind whatsoever on Mike McCarthy, and it's an offence Barnes seemed reluctant to punish.

A Leinster free-kick for an early Toulon drive followed, and it looked like Leinster were in control of the setpiece.

However, Toulon hit back near the half hour mark, and once again, there was a questionable sliding up the scrum from a Leinster backrow. Chiocci and Ross appear to be scrummaging square to one another, with Jordi Murphy driving inwards.

However, as the scrum turns, it does appear that Murphy has a full arm bound to his second row, meaning by the letter of the law he's legally bound. While it shouldn't be legal for a flanker to directly bore in on a prop, there is an unnecessary ambiguity in the law.

Leinster conceded a free-kick next time around for an early engage, before even more messing in the scrum from both sides showed us just how difficult things can be for referees.

In this instance Barnes penalised neither side, but he would have been well within his rights to award a penalty either way.

Below, we can see how Chiocci is driving directly across the straight body of Mike Ross, but once again, Jordi Murphy has slipped up the scrum to drive in on the front row.

In a scrum battle that went one way and then the other, Leinster picked up another penalty soon after, and there was little doubt about it.

Here, we can see how Ross is driving straight and through Chiocci, who has popped out his hips under pressure, eventually collapsing and giving away the penalty.

Even Murphy is bound legally this time, with his shoulder in behind Ross' backside.

It was another impressive Leinster scrum just after the break, with Cian Healy excellently driving over the ball to win possession.

Healy's technique is absolutely superb as usual, with his back straight and parallel to the ground, 90 degrees at the hips, and 120 degree at the knees.

Healy gets a fantastic nudge on Hayman, forcing him back, and securing the turnover. 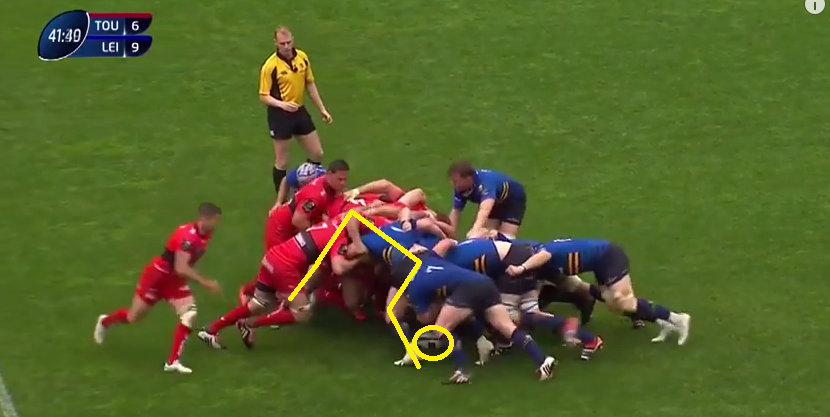 With the scrum having gone down on the far side, but the ball playable at the back, Barnes allows Leinster to play on, but the ball gets a helpful to the back of the scrum by Sean Cronin's right hand.

It's illegal, but I'm not sure any referee in the world could spot it.

By the time we'd played 55 minutes we were on to the 16th scrum of the game, and the physical demands were taking their toll on 35-year old Ross.

Leinster conceded a penalty on his final drive of the day, when the fresh-legged Alexandre Menini drove straight and powerfully, forcing Ross to collapse.

Marty Moore came off the bench soon after, but his first action was to give away a free-kick for an early drive.

Leinster had a lucky break 10 minutes from time, securing a turnover despite Jack McGarth's boring.

We can see below that McGrath has been driving directly across Carl Hayman, resulting in the scrum collapsing.

However, because Leinster have won the ball back onto their side, Barnes turns the scrum over in their favour.

On the reset, a monstrous push from Marty Moore seals a penalty, and there is no debating it. Leinster's pack get the nudge, with Moore advancing on Menini. Rather than go backwards, the Toulon back and second row try to whip the scrum around, and with Leinster marching forward, the penalty is awarded. 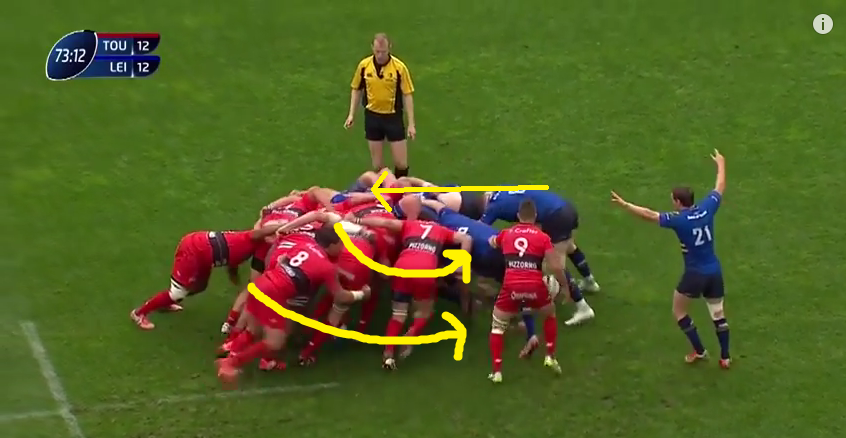 Menini got the better of Moore though with the first scrum of extra time, driving legally and powerfully, to the point where Moore tries to wheel around.

We can see below that Menini's back is straight and his shoulders are square, while Moore has tried to rotate the scrum around him, giving Barnes little option but to award a Toulon penalty.

Sunday's game was as difficult a set of scrums to referee as you'll ever see. On several occasions, there were grounds to penalise both sides, and because of that we're inclined to cut Wayne Barnes some slack.

However, one aspect of the scrum he did consistently neglect was Leinster's backrow driving in on the Toulon front-row. It's become a tactic increasingly used by teams, and is rarely, if ever punished by referees.

While we've seen referees clamp down more on crooked drives in recent months, this needs to be Rugby World's top priority to ensure the scrum becomes quicker and safer in the future.


popular
Here's all the GAA games on the tube this weekend as the provincial championship heats up
GAA club transfers that shocked the county: Jason Sherlock
Red cards, slips, heroes, villains and last second equalisers - Derrygonnelly's extra time win over Dromore had it all
Fermanagh footballer opens up about losing her mum to suicide and urges people to seek counselling
Jordan Larmour enjoys satisfying bit of revenge on Mack Hansen
Ronnie O'Sullivan on why he staged sit-down protest during UK Championship defeat
Ruesha Littlejohn gate-crashes Katie McCabe's interview after another player-of-the-match display
You may also like
6 years ago
VINE: Gruesome footage of Toulon forward applying choke hold on Richardt Strauss
6 years ago
French media claim Ian Madigan 'murdered' Leinster's Champions Cup dreams
6 years ago
PICS: Toulon and Leinster dressing rooms leave you in no doubt who won an epic battle
6 years ago
GIF: Match-winning ball will have pride of place in Château Habana, says Bryan
6 years ago
Player ratings: Leinster fall short after mammoth effort against Toulon
6 years ago
These two frightening statistics prove the enormity of Leinster's task today
Next Page