"Every time I come up against Australia the intensity and physicality is second to none. There wasn't a lot of people talking about the Australian physicality before the game, but you saw how physical they were in the first 10, 15 minutes and they carried it through the game" - Ireland captain Peter O'Mahony.

O'Mahony was right. The intensity and the physicality by the Australians in the first Test match in Brisbane last weekend was second to none.

The Wallabies defence fronted up and made a statement against an Irish forward pack that had largely steamrolled their way through opposition packs in the Six Nations. 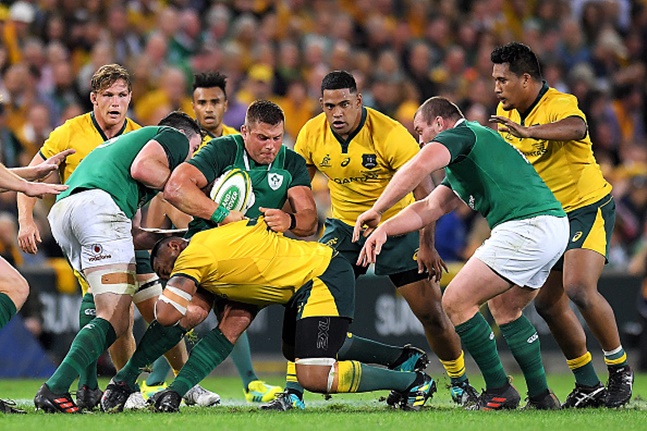 If Ireland had just under 60% of their carries taken by forward ball carriers and generally boast over 60% possession, the physical contest was always going to be a massive point of emphasis for Australian head coach Michael Cheika.

It's understood that Cheika made it clear to the South African official that he intended for his players to line up a few metres behind the offside line to build some extra momentum before then meeting the Irish ball carriers head on in the tackle.

The Australians used the tactic effectively at times but some of their most impactful tackles were made by just being more forceful in the collision than their Irish opponents.

Wallabies second-row Adam Coleman can be seen flying out of the defensive line here to send Henderson crashing to the turf, while in the clip below centre Samu Kerevi commits to Kearney by showing some excellent footwork to readjust his line and stop the Irish full-back dead in his tracks.

Both tackles were made through good reads from Coleman and Kerevi but the execution was based on power and dominating the collision.

However, Hooper's tackle on Carbery and Beale's hit on Murray were both made through identifying loops and passes to second receivers.

What's impressive about Hooper's tackle on Carbery in particular is not only the read that he makes but how Koroibete and Israel Folau both jam in with him as soon as they realise that their flanker had shot out of the line to cut off the play.

Ireland did not have the same synchrony in the build up to Bernard Foley's try when Jacob Stockdale lagged behind Robbie Henshaw after the Leinster centre attempted to jam in on Foley when the Wallabies looked to attack wide.

But the difference with a lot of the big tackles that the Australian defence made on Saturday was that a lot of the Wallabies tackles were made when shooting in on Irish tip passes, loop passes or passes to second receivers.

A lot of the Irish play on Saturday went through scrum-half Conor Murray so Australia identified that if they could jam in and win the physical contest in the tackle they could really disrupt and distort the Irish attack and give themselves a great chance at winning.

In particular, the Wallabies were well aware of Ireland's propensity to use the loop or wrap around as you can see Beale reads the return pass from Jordi Murphy perfectly before jamming in on Murray to flatten him.

Even when there was no tackle to be made you can see below that Kerevi is spying on Carbery and ready to jam in should he receive the return pass from Aki.

The Connacht centre, as he did so often in the first test, instinctively barreled his way forward in this instance but notice how Kerevi and winger Dane Haylett-Petty both alter their runs to jam in towards the ball instead of maintaining their lines.

With Haylett-Petty in particular you can see him prepare to sprint out at Rob Kearney before noticing that Aki had actually taken the ball into contact.

The Australian defence was ultra-aggressive in the first Test, and while some tackles were simply down to good reads and being dominant in the collision, others are a direct result of analysis and focusing on snuffing out loop plays and passes to second receivers.

Ireland still finished the game with 60% possession and had great try scoring chances through CJ Stander and Kieran Marmion but they ultimately came up short in Brisbane.

Joe Schmidt's side did not directly lose the game because they were outmuscled in the contact area but the Wallabies defence really brought the physical battle to Ireland in a way very few teams in the Six Nations could.

Australian defence coach Nathan Grey insists that the improvements made by the Wallabies in this area is down to each player having a more defined idea of their role in the defence and trying to get them to focus on that role within their club side.

“The guys have a really clear understanding of what we do and the Sr [Super Rugby] coaches understand that as well, so we're very diligent in making sure that everyone was aware of that and we're not saying that the way the Wallabies defend is the only way,” he said.

“I know from what all other teams are doing, we're all aligned, which is fantastic, so the players have a real clear understanding of what's expected of them and that's a great thing, to have that clarity and consistency across all teams.”

Ireland will need to do a better job at defending in the wider channels themselves against the Wallabies but Joe Schmidt's side, as they always do, should once again have a lot of the ball in Melbourne and the looming returns of Cian Healy, Sean Cronin and Tadhg Furlong should beef up the Irish forward pack as they prepare for another physicial encounter this weekend.