It hasn't always been plain sailing for Peter O'Mahony over the last two years.

He was relegated to the bench for the majority of last year's Six Nations before winning his place back in the starting side with a superb performance against England at the Aviva Stadium.

He was made British & Irish Lions captain for the first Test against New Zealand last summer but was then subsequently dropped from the matchday squad for both the second and third Tests.

END_OF_DOCUMENT_TOKEN_TO_BE_REPLACED

He lost a friend, mentor and coach in Anthony Foley and had to shoulder the load and front up to the media and address the passing of a man that clearly had such a massive effect on him as both a player and also as a man.

O'Mahony has had both his professional and personal ups and downs over the last few years, and that's sport, and to a very large degree life too, but he had arguably his finest hour against New Zealand on Saturday.

Before the match had even started, O'Mahony was straight into his teammates just moments after the All Blacks had performed Kapa O Pango. 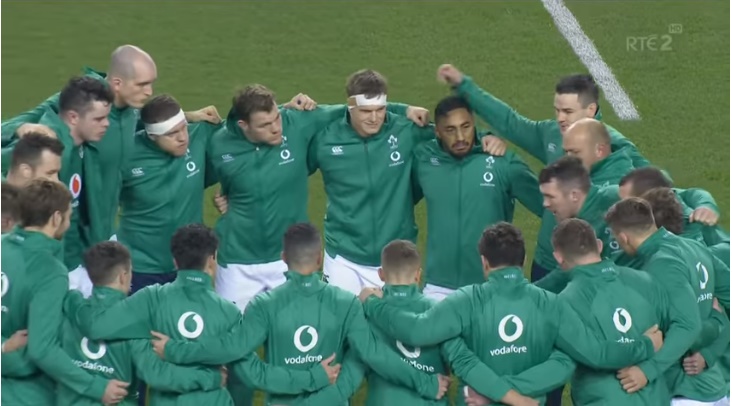 END_OF_DOCUMENT_TOKEN_TO_BE_REPLACED

Rory Best is the captain but it's clear that O'Mahony has the respect of the playing group and took it upon himself to set the tone for the game ahead.

Wallabies number eight David Pocock once remarked that he doesn't really have a lot of time for the ra-ra speeches, the last minute rallying cries, the 'let's put the fear of god into them' type routines if you will, and to some extent it can all be a bit trivial if you go out and get played off the park, but from the outset of this match it was clear to see that O'Mahony's words had some purpose and that he was switched on and up for this. And it didn't take him long to get going.

From the opening two minutes of the game we can see the Munster captain throw himself into an All Black ruck after a great tackle from Josh van der Flier.

O'Mahony was a huge threat at the breakdown on the summer tour of Australia and here he gets himself into a great position where he can have a crack at the poach.

END_OF_DOCUMENT_TOKEN_TO_BE_REPLACED

New Zealand send Owen Franks, Kieran Read and Liam Squire into the breakdown to secure the ball but it's an early sign of intent from O'Mahony who very much continued the game as he started.

Like most great poachers, he hangs back and waits until the tackle is made before getting into a good position where he can make a play at the ball.

Like a striker in football, you have to keep putting yourself in positions to score, or in this case, steal.

Again, below we can see O'Mahony have another crack at the ball just after the midway point of the first-half. New Zealand lock Brodie Retallick picks up a loose ball in the middle of the pitch and O'Mahony goes high in the tackle allowing him to stay on his feet and make a play at the ball.

He manages to get one hand on the ball but is soon blown out of the ruck by Sam Whitelock who goes straight off his feet in what should have been a penalty to Ireland.

Persistence is key here. O'Mahony wasn't having an awful lot of joy at the breakdown in the opening 20 minutes but he kept getting into positions where he could make a play and was eventually rewarded as players started to tire.

Below we can see New Zealand flanker Ardie Savea do a brilliant job of cutting inside both O'Mahony and CJ Stander before making good metres off the right wing.

Best makes the tackle on the All Blacks openside but O'Mahony sticks with the play and immediately get over the top of the ball and latches himself onto Savea.

He absorbs the clean out of Ben Smith, Owen Franks and Whitelock, who once again goes of his feet while also entering the ruck from the side.

Ireland win the penalty and kick for the line-out. From there they go straight to O'Mahony who wins the line-out with a great jump to beat Kieran Read to the throw.

O'Mahony feeds the ball off the top to Kieran Marmion and it's a brilliant move from Ireland who switch to Bundee Aki and ignore the pod of Josh van der Flier and CJ Stander to hit Jacob Stockdale on the blindside.

Ireland would have identified that Damian McKenzie tends to stand quite wide from the line-out and that there would be space in the left corner where Stockdale remarkably backed himself to chip the ball over 6 ft 7 Brodie Retallick just minutes after he'd been charged down in a similar attempt by Kieran Read.

It's a great finish from the Ulster winger but O'Mahony made two very good plays that led to the opportunity.

His line-out jumping and his turnover abilities have been well documented for sometime now and they're massive facets of his game.

However, there was one play in particular against the All Blacks that just required effort and a desire to be first to the ball.

This type of effort underpinned a lot of the good work Ireland did, whether it was Johnny Sexton sprinting to knock Ben Smith into touch in the last few minutes, or O'Mahony sprinting to snare a ball out of the air and deny Smith a potential try, Ireland were not going to be outworked.

O'Mahony has been overlooked by both Ireland and the Lions over the last two years but he was a deserving man of the match in what is arguably Ireland's greatest performance of the Joe Schmidt era.

From setting the tone before the match, to making match winning plays in the air, at the breakdown and in front of his own line, it was quite possibly his finest hour.

He never gave in, during the match, or over the last two years.