Scenes of utter devastation in All Blacks dressing room, but lovely comments by Kieran Read

Anyone who watched the first 10 minutes of Ireland versus New Zealand would know just how much both sides wanted this one.

Steve Hansen set the scene for his All Blacks side, last Sunday, by declaring Ireland would be the best side if they could beat his men.

New Zealand's players responded by bolting out of the gates and pouring forward. Ireland were required to grit it out and tackle anything in a black jersey that moved. Josh van der Flier had registered six tackles in nine minutes, then nine in 13. Devin Toner, Garry Ringrose and Tadhg Furlong were throwing their bodies on the line.

END_OF_DOCUMENT_TOKEN_TO_BE_REPLACED

CJ Stander elicited the first guttural roar from the Aviva Stadium crowd, on six minutes, when he teamed up with van der Flier to claim a turnover in the Irish 22. It was a big moment, but many more were to follow.

Jacob Stockdale scored (another) wonder try and every player in green left a piece of themselves out on the pitch by the time Wayne Barnes blew for full-time.

This Sportsfile picture really summed up what was required to down the world champions in Dublin for the first time: 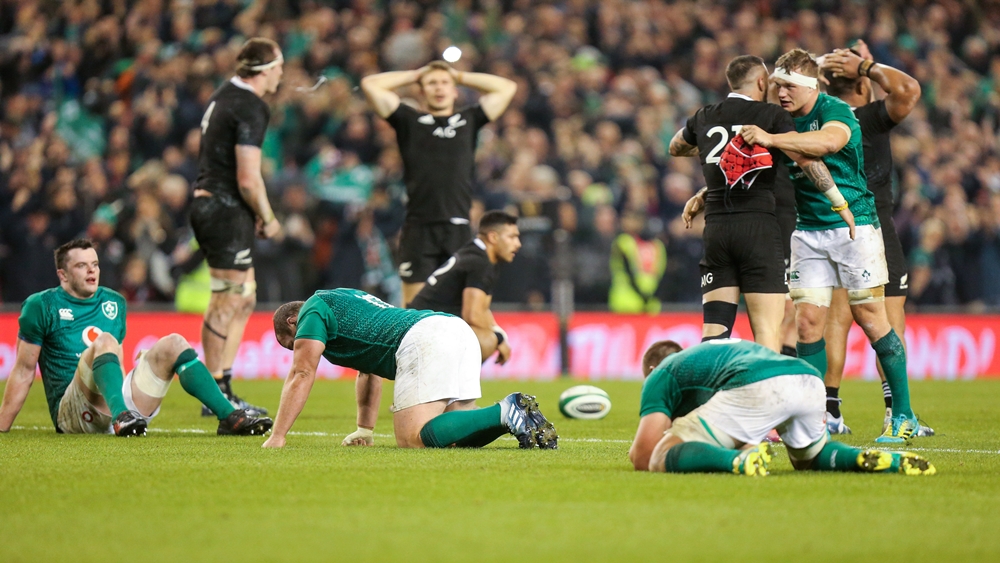 Post-match, Hansen and New Zealand captain Kieran Read were magnanimous in defeat. There would be war stories told at the post-game banquet but Read did confirm that several of his teammates had been in to the Irish dressing room to pass on their best, to share a drink and to swap jerseys.

Before they crossed the corridor, however, there were scenes of sheer devastation and hollowness in the New Zealand dressing room.

Reflecting on the game, in the fresh aftermath of it all, Read spoke very well on how much the defeat hurt, and how well Ireland played.

"You can see in the changing room, it's pretty sombre and the boys don't enjoy losing," said Read.

"It was just, ah, one of those scrappy games. We felt we couldn't quite get in there all day. We gave ourselves a chance there in the last 20 minutes, you know, and didn't take those opportunities. That's what it comes down to. And on big occasions, it's pretty small margins, aye?

"A lot of that has to go down to the Irish. They defended pretty well and they were able to shut us down today.

"Hey, it is something to really bank. A big game against a really good side against thousands of people screaming for the opposition. We want to be in a position next year [at the World Cup] where we are in that same position. So we'll bank this and next time we are in this position, we will hopefully reverse that result."

Well said by the All Blacks skipper.

This one meant a lot but Ireland were too good for the All Blacks. We better get used to this one being a real rivalry for the foreseeable future.


popular
GAA club transfers that shocked the county: Jason Sherlock
Jordan Larmour enjoys satisfying bit of revenge on Mack Hansen
Fermanagh footballer opens up about losing her mum to suicide and urges people to seek counselling
Here's all the GAA games on the tube this weekend as the provincial championship heats up
Ruesha Littlejohn gate-crashes Katie McCabe's interview after another player-of-the-match display
Roy Keane's three leadership tips he gave to Owen Farrell can't be argued with
Kieran Donaghy vs Tommy Walsh - The 'Twin Towers' reunite this weekend
You may also like
1 week ago
"I've had stick my whole career" - Mike McCarthy on 'Plastic Paddy' jibes and singing the anthem
1 week ago
"Just brilliant" - Alex Goode backs Caelan Doris for 'Best Player' award
1 week ago
Sean O'Brien praises "unbelievable" Robbie Henshaw after his winning return
1 week ago
Four Ireland stars voted onto Autumn Nations Series 'Best XV'
1 week ago
Sean O'Brien on rugby league star he'd love to get in a boxing ring against
1 week ago
Joey Carbery puts himself in position to end odd Six Nations streak
Next Page