A lot can change in two minutes, in rugby. In two months, a whole, heaping bundle.

When Gavin Coombes went down with a brutal ankle injury, against Leinster, one wondered how their back row would cope. Since then, Jack O'Donoghue and Peter O'Mahony have put their hands up for more, while Alex Kendellen has been a revelation.

Saturday at the Aviva Stadium, all three men were at battle stations from the get-go. Combined, they made 22 carries for 65 metres, stuck 37 tackles, had five turnovers and played big roles in another few.

END_OF_DOCUMENT_TOKEN_TO_BE_REPLACED

They also gave Antoine Dupont a torrid time of it, harrying and plaguing him at every twist and turn. On three different occasions, Dupont was swallowed up by Munster back-rowers, forcing turnovers or poor ball for Toulouse.

Over the course of the 100+ minutes, played out in a pulsating atmosphere, Munster forced 19 Toulouse turnovers while only conceding five themselves. Their back row was pivotal in those momentum-swinging moments. Toulouse still had quick ball - their ruck speed was over a second better than Munster - but those turnovers were boons for the players, and fans doing all they could to roar their team on.

Watching that game on Saturday, it struck me that O'Donoghue must have surely done enough to play himself onto Ireland's summer tour to New Zealand. And, with two midweek games against the Māori All Blacks, Alex Kendellen is well on his way to punching his ticket. 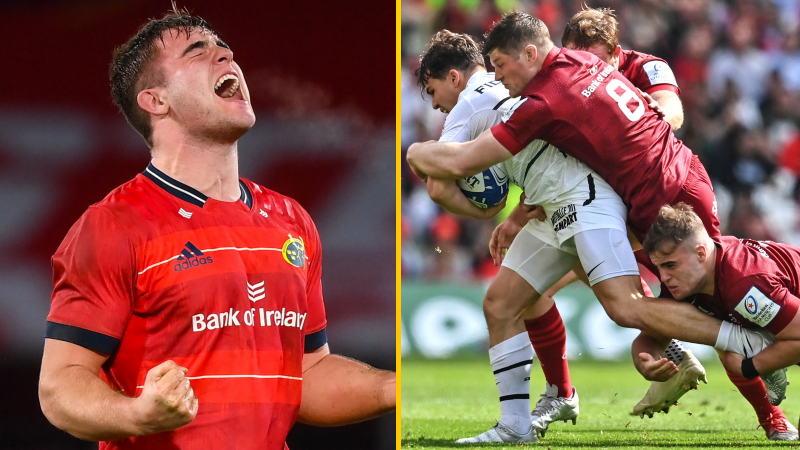 END_OF_DOCUMENT_TOKEN_TO_BE_REPLACED

With five games on the summer tour itinerary for Andy Farrell's side - three against New Zealand and two midweek games against the Māori All Blacks - fringe and uncapped players will be heading South.

When the Six Nations wrapped, we put together a comprehensive 42-man squad and included the following back row selections. Cian Prendergast of Connacht was the only uncapped back row in our likely squad.

END_OF_DOCUMENT_TOKEN_TO_BE_REPLACED

Coombes will be lucky if he plays for Munster again, this season, and while Prendergast is still well in the mix for the tour, as a player that could benefit from time with the senior pros, it may be Nick Timoney that finds himself under pressure.

Leinster's formidable back row trio will all travel, if fit, and O'Mahony is a key leader, and player, within the senior squad. If Ireland want a versatile back row that can cover all three positions for Test matches and be a midweek leader, Jack O'Donoghue is well positioned.

Now against 28 and without adding to the second Ireland cap he won, back in 2017, O'Donoghue is having the season of his life. Earlier this season, on House of Rugby, Greg O'Shea commented:

"Jack O'Donoghue is probably playing the best rugby he has ever played. He has those [two] caps from a few years ago. But, at any other stage in the last couple of years, if he was playing the way he is now, he'd be in the Irish back row. But he can't get in, which is crazy."

Andy Farrell may be content with the Leinster trio and Peter O'Mahony as his four back rows to build his Test 23 around, so could look at younger stars like Prendergast and Alex Kendellen to pit them against the Māori side. A seasoned pro like Rhys Ruddock could also make the trip, if Farrell wants some nous/dog and some leadership for a side with several lads in their early 20s lining out.

Kendellen has only four senior Munster starts in the No.7 jersey but looks to be a player than can challenge the in-form Josh van der Flier in that position, next season, and beyond. Whereas Nick Timoney brings that ball-carrying electricity and work-rate, Kendellen could be the dogged, fearless openside that makes a real impact at Test level.

With Dan Leavy now retired and Will Connors struggling with knee issues, Ireland are not over-flowing for out-and-out openside cannons. The timing could be perfect for Kendellen.

Both men are definitely in the conversation now. If they can help Munster to a United Rugby Championship final, or even a victory, they can both start packing their bags.


popular
Cutting through the contradictions from one of the worst television segments of the year
Roy Keane shows great comic timing after Jack Grealish party invite
France the sore losers as Ireland Men reach first ever Sevens World Series final
Kilkenny corner back does what every defender is supposed to do to win All-Ireland under-20
"I don't want to stick the knife in" - Are Leinster in Munster's heads?
Noel Gallagher left 'covered in blood' after headbutt from Ruben Dias’ dad
Ralf Rangnick nicknamed 'specs' and subject to 'bully behaviour' at Man Utd
You may also like
1 week ago
"I've probably watched every single Paul O'Connell speech" - Kyle Sinckler
2 weeks ago
Josh van der Flier proving why Lions snub was so baffling in every single outing
3 weeks ago
Eddie Hearn hints at Katie Taylor v Amanda Serrano rematch in Ireland
4 weeks ago
England scrumhalf gets away with clear strike on Ireland's Michelle Claffey
1 month ago
Munster announce signing of French centre who can play for Ireland
1 month ago
Stacey Flood and Sam Monaghan star as Ireland get first Six Nations victory
Next Page