Alex Goode wins European cup on Saturday, still on the beers in full kit on Sunday

It's been some weekend for Alex Goode

On Saturday, Goode's Saracens side won the Champions Cup Final. The London-based side defeated Leinster 20-10 at St. James' Park in Newcastle. Tries from Sean Maitland and Billy Vunipola were enough to gift Sarries the cup, alongside the trusty boot of England star Owen Farrell.

Celebrations started as soon as the final whistle came around - and especially so for Alex Goode.

Eddie, are you watching? 👀

Alex Goode has been named EPCR European Player of the Year 🙌

Outstanding yet again today, what a season he has had! pic.twitter.com/wn63W9VvtG 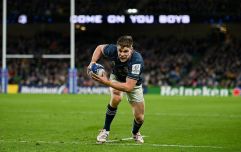 END_OF_DOCUMENT_TOKEN_TO_BE_REPLACED

Goode was named EPCR European Player of the Year, and set about celebrating with the rest of the squad.

Over 24 hours later, Goode hadn't been home - and was still in the pub. In his full match kit. And boots. 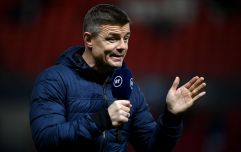 END_OF_DOCUMENT_TOKEN_TO_BE_REPLACED

The clips were posted on Instagram by Goode's teammate Maitland.

In defeating Leinster, Saracens became the first English team to win three Champions Cups, a feat made even more impressive when you consider they remained unbeaten throughout. They will also contest the Gallagher Premiership semi-final later this month in their pursuit of a league and cup double.

Despite defeat in Newcastle, Leinster are still set to win the Pro14 title. It looks to be a productive summer ahead for the Dublin-based side. Wales defence coach Robin McBryde, a key member of Warren Gatland's backroom staff, has already agreed to join the club after the Rugby World Cup.

END_OF_DOCUMENT_TOKEN_TO_BE_REPLACED

Before the game, JOE spoke to nutritionists from Saracens and Leinster. Fuelling the top clubs in Europe is a difficult task, but one George Morgan (Saracens) and Daniel Davey (Leinster) are entrusted with.

The pair provided a full day's diet plan and also told us how they handle vegetarian players and the Keto Diet.

You may also like
2 weeks ago
"When someone is drowning, usually they can take someone with them" - UJ Seuteni
1 month ago
Ulster fans seething as 'official delegation' from La Rochelle allowed into closed-doors game
1 month ago
Caelan Doris proves world-class credentials as Leinster annihilate Racing 92
3 months ago
"Ronan O'Gara came in and said, 'On the 28th of May, we are winning the Champions Cup'"
7 months ago
Irish provinces discover their pool stages fate for Champions and Challenge Cups
8 months ago
Ronan O'Gara spoke like an Ireland coach in-waiting, but he's in huge demand
Next Page