Ahead of Paul O'Connell's 12th tussle with England, here's how he did in the previous 11

Paul O'Connell will line up against England, this weekend, for the 12th time in his Test career. The Ireland captain first played England in 2003 and got off to a losing start. It would not happen again for five years.

Ahead of Round 12 with the Auld Enemy, English players and pundits have been paying tribute to the Munster man. George Ford, Mike Brown and George Kruis have praised his leadership, Graham Rowntree called him a 'a constant driving force in the Ireland team'.

Ahead of his latest throw-down with the English, here is how O'Connell fared in rounds one to 11.

Martin Johnson and his English teammates shunted Ireland off their red carpet and Jonny Wilkinson did the rest. England won the Grand Slam in controversial style.

The world champions were beaten on their home patch as Girvan Dempsey and Ronan O'Gara did the scoring damage.

A double dose of reality for an England team lost without Wilkinson's ever reliable kicks and drop goals. Brian O'Driscoll ran in a try and O'Gara contributed 14 from the kicking tee.

Shane Horgan won the match with three minutes and three millimetres to spare as he stretched over for a try in the right-hand corner. 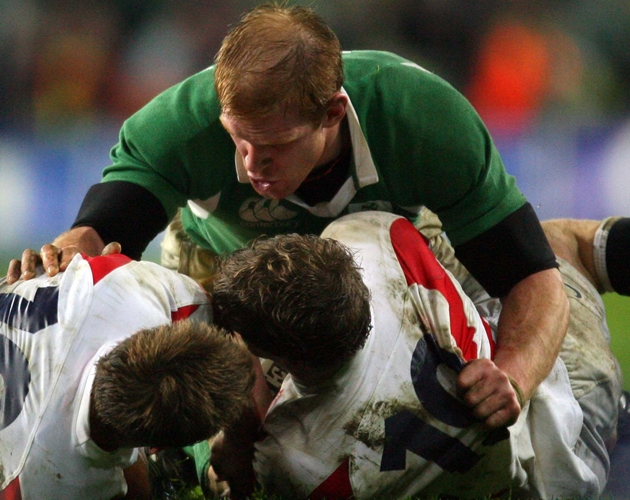 A thrashing at Croke Park. God Save the Queen played out to an eerie silence, Horgan scoring off a O'Gara crossfield kick and Isaac Boss with the exclamation point try.

The scoreline suggests a tight match but Ireland had the upper hand for 70 minutes before a late English surge caused wobbles. O'Driscoll scored a fantastic pick and dive try from close range.

Back to winning ways in Twickenham thanks, in large part, to a brace of Tommy Bowe tries. Accidentally clattered O'Driscoll with a knee to the head.

England arrived in Dublin seeking the win that would deliver a Grand Slam. They still left as champions but defeated, shell-shocked captains.

Outshone my Courtney Lawes in the second row and unable to inspire his team to a late comeback.

As it stands: Paul O'Connell 7, England 4


popular
Andy Farrell goes for Munster veterans as Ireland team to face New Zealand named
The four stone-cold certainties for All-Stars even as early as this
Eamon McGee just couldn't help himself with Armagh-melee tweet
"He's actually smiling putting the ball over the bar. He should nearly be fainting." - Ryall on Limerick's legacy
Kylian Mbappe reportedly wants PSG to sell Neymar
Gavin Coombes one of four Irish players to push themselves into Test picture
"The economy was one of the big reasons" - Cadogan's move from an electrician to personal training
You may also like
20 hours ago
Gavin Coombes one of four Irish players to push themselves into Test picture
22 hours ago
Bundee Aki understandably emotional, as Ireland pay moving tribute to late Sean Wainui
23 hours ago
Full Ireland player ratings after Maori All Blacks teach us an early lesson
1 day ago
"We could lose all five games" - Darren Cave with a rare take on Ireland's chances
1 day ago
Mike Lowry and Peter O'Mahony in First Test contention as Ireland shuffle deck
2 days ago
"Significant" knee injury ends Iain Henderson's tour of New Zealand
Next Page