How a 36-man Lions squad would look, and the Irish players affected

Should the squeeze be imposed, a handful of top talents will miss out.

The British & Irish Lions are heading to South Africa this summer and looking to invoke the spirit of 1974 and 1997 to defeat a strong Springboks side.

Warren Gatland is reportedly looking at training facilities in Guernsey so his Lions squad can train in a bio-secure bubble when they all assemble in late June. The warm-up game against Japan is still going ahead at Murrayfield, on June 26, but there may be a couple of games trimmed from the South African leg of the tour.

END_OF_DOCUMENT_TOKEN_TO_BE_REPLACED

While talks are ongoing about the possibility of fans - even in s reduced capacity - being allowed to attend games, a couple of the midweek matches will be under threat if a condensed schedule is the compromise solution.

Many leading pundits, then, are predicting a smaller touring party of Lions players, coaches and backroom staff. The travelling circus may be short of a few caravans.

Gatland could find himself restricted to selecting only 35 or 36 players, down from the 41 he selected for the 2017 Tour to New Zealand [keeping in mind he also called up six additional players, later in the tour].

With that in mind, we have revisited our 2021 British & Irish Lions squad selection, and made some tough cuts. For Irish players like Andrew Porter and Tadhg Beirne, who can cover multiple positions, it is good news. One Ireland star, CJ Stander, does miss out as we cut into our back row picks.

Beirne now mainly covers our second row - with Joe Launchbury and Courtney Lawes missing out - while Wales' Josh Navidi comes into the mix. The toughest call is at outhalf, with Dan Biggar edging out Finn Russell and Owen Farrell covering 10 and 12. 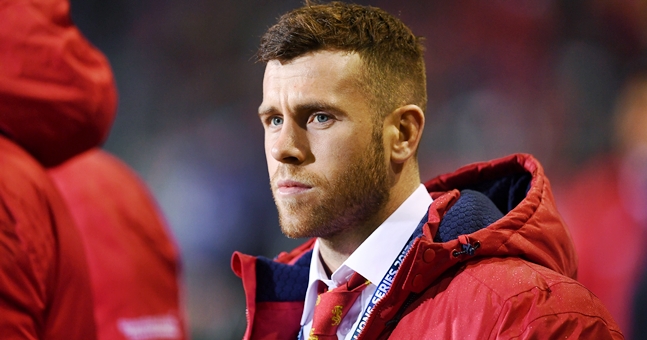 Gareth Davies was part of 'The Geography Six' on the 2017 Lions Tour. (Photo by Stephen McCarthy/Sportsfile)