"Everyone's starting position is up for grabs" - Best under pressure, again

"When Ireland play well, it's when Rory Best plays well".

Rory Best arrived to Japan with a target on his back. His lineout throw was under the microscope. If Ireland were addicted to hitting Devin Toner, the methadone of James Ryan and Peter O'Mahony just wasn't doing it for us. 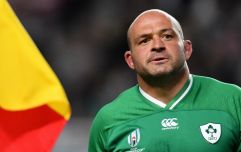 END_OF_DOCUMENT_TOKEN_TO_BE_REPLACED

A more than solid performance against Scotland was the much needed tonic for Rory Best. He was secure in the scrum, dynamic in the loose and he threw accurately. He threw accurately. It's a strange one for the hooker, think of all the pressure and responsibility of a place-kick but you're only controlling one cog in the machine. And without any of the credit. But, against Scotland, it worked.

Best played 80 minutes in that opening game, and was asked again to turn out against the hosts just 6 days later. To put it simply; Ireland lost a number of key lineouts due to poor throws, and with the home crowd augmenting every minor momentum swing, the pendulum just kept going in Japan's favour until they ran out worthy winners.

Joe Schmidt trusts Rory Best. He always has. Sean Cronin has 70 caps for Ireland, but only 10 of those have been starts. No one else has ever had as many substitute appearances in the international game. But Niall Scannell will start against Russia, as Schmidt shuffles his pack and freshens his side. Is Rory Best in danger of losing his place on the biggest stage?

Speaking on The JOEpan Rugby Show this week, former Munster and Ireland hooker Jerry Flannery admitted that Best was under pressure, but backed the Ulsterman to come good;

"I think after the Japanese game everyone's starting position is up for grabs now. I think that's the measure that the squad is at, there's enough quality below the starting 15 that they can come in and push performances. When the guys who are playing don't perform well... Yeah, obviously Rory will be under the pump, but Rory has shown time and time again that he can perform at the highest level, hence why we have Grand Slams, why we have so many 6 Nations Championships, winning Test series down in Australia. But definitely, this didn't help. Four big set piece turnovers in the game. But there was an awful lot of other factors as well."

Ireland looked jaded and fatigued against Japan, perhaps emphasised by Schmidt's decision to start emptying the bench in the 45th minute. Flannery went on to explain what he believes was a key factor in Ireland's shock defeat;

"I think one of the main ones is how we allowed the Japanese to play, because we were so passive in defence with that bent back-line. I know that's not something that Andy Farrell would be advocating, to be so passive on the edge. So the players, they probably needed to be a little bit more aggressive out wide. If you think back to the World Cup warm-up games, how effective Robbie Henshaw was at getting high up on the outside, cutting off that pass and just killing the Welsh attack by stopping them getting the ball to the edge. It was the exact opposite in this game, we just had the line bent back and we gave up easy metres, allowing the Japanese to run at us."

For now, Niall Scannell starts as Ireland began their road to redemption against Russia, with Sean Cronin named at 16. We'll see.

eir sport is the only place to watch all 48 games LIVE from the Rugby World Cup - https://eirsport.ie/subscribe

popular
From Canada to Carlow in the name of hurling: Nicolas Redmond's journey to the Fitzgibbon Cup
Kerry's captain selection for 2022 sums up the problem with their outdated system
"It must be difficult to say no, having won a game and heading back together"
Chelsea forced to change Stamford Bridge changing room after Liverpool complaint
Ireland fitness update offers even more reason for Six Nations optimism
Jesse Lingard 'angered by lack of respect' shown by Man United
Eddie Jones shares great tale on hour-long chat with 'inspirational' Roy Keane
You may also like
1 year ago
"It was basically a garden shed, and we took the whole thing over"
1 year ago
"I genuinely think he's one of the best I've ever played with" - Rory Best
1 year ago
"I saw this old, fat bloke with a bald head and I thought Besty was behind him"
1 year ago
Rory Best will forever cherish retirement gesture made by Furlong and Healy
2 years ago
"I'm not necessarily sure I want to pull on a tracksuit and coach every day" - Rory Best
2 years ago
Rory Best to play one last game before he hangs up boots for good
Next Page