Dylan Hartley can still remember his first press conference after being named England captain by new head coach Eddie Jones, back in 2016.

England were not far removed from a disastrous World Cup campaign, when they, as hosts, failed to make it past the group stages. Most of the questions, he recalls, were about his spotty disciplinary record. It was not until he led England to a Six Nations Grand Slam, two months after getting the captaincy, that he felt he could tell reporters to move on.

END_OF_DOCUMENT_TOKEN_TO_BE_REPLACED

Having totted up 54 weeks' worth of suspension time, between 2007 and 2015, Hartley almost had a spotless record from the moment he became England captain. Almost. In December 2016, he copped a six-week ban for a swinging arm tackle on Sean O'Brien during a European Cup encounter.

On the latest episode of JOE UK's House of Rugby [LISTEN from 2:00 below], Hartley and O'Brien were reunited by Alex Goode, and all three men had plenty of tales to share. Of course, Hartley missing out on a Lions Tour due to suspension had to come up... 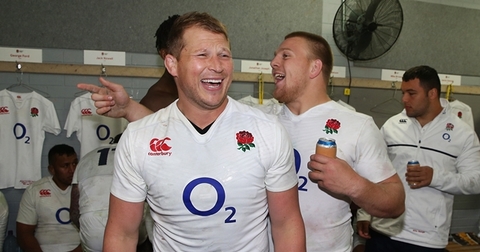 Dylan Hartley (L) and Paul Hill celebrate after a series win over Australia in 2016. (Photo by David Rogers/Getty Images)

END_OF_DOCUMENT_TOKEN_TO_BE_REPLACED

Asked how he dealt with the constant questions about his disciplinary record, Dylan Hartley responded, "Well, what's the other f***ing option? Just crawl into a hole and go away?"

Sean O'Brien had plenty of on-field jousts with Hartley, heading into the 2013 Lions Tour to Australia, but was looking forward to being on his side for the upcoming games against the Wallabies. The squad was announced by Warren Gatland and both O'Brien and Hartley were included, only for the England hooker to get hit with an 11-week ban.

END_OF_DOCUMENT_TOKEN_TO_BE_REPLACED

He was sent off, while playing for Northampton Saints, in the Premiership final against Leicester Tigers. He had called referee Wayne Barnes a 'f***ing cheat' after a penalty had been awarded against his side. Barnes heard him clearly and flashed the red card.

The entry-point for such an offence was six weeks, but past disciplinary misdemeanours saw him banned for 11 weeks. Ulster and Ireland hooker Rory Best replaced him in the Lions squad.

O'BRIEN: I remember going into the [Lions] camp that day, and your gear was there. You were there that day with us.

HARTLEY: I did the squad photo. They photo-shopped my face off, and put Rory Best on! I'd say it's the best rig Rory's ever had! I made his career, basically. He's now gone on to be Lord of Belfast or something, isn't he?!

The 'made his career' line is delivered with a smile. Best and Hartley had lots of duels over the years - the former England star was banned two weeks after boxing the Ulsterman during a game - but there was a level of mutual respect there.

Hartley grew up in New Zealand and only started living in England from the age of 15, so he says he was not as hung up on the British & Irish Lions and what it meant to play for them.

"After being selected, it was a huge honour and a huge moment. You do get pumped up when you make the tour, and it is good for financial reasons. But when I missed out, I wasn't bothered about it.

"Looking back now, it would have been great craic to be involved, as it was a series the Lions had won... but, at the time, I was more upset about what had happened with Northampton. It wasn't so much about me, it was about the team, the town, the club. That, compared to the Lions, it didn't really bother me."

Hartley, who retired from rugby in 2019, now reflects that every time he had on-field disciplinary issues 'something in my life wasn't quite right'.

"It's not like I just decided in a game to do something crazy. It was all built up, and something off the field was happening."


popular
"I went up to the Italians and gave them a big auld shoulder" - Paul O'Donovan does it again
Wexford Under-20 lights it up as Ferns win their first ever county title
Wexford, Waterford and Kilkenny down some good men as Australia calls
Man United have 'decided to sell' promising midfielder James Garner
Graeme Souness under fire for calling football a ‘man’s game' while sat with Karen Carney
Luke Chadwick recalls furious Alex Ferguson reaction when he rejected loan move
Erik ten Hag's training ground punishment for Man United shows there may be hope yet
You may also like
2 weeks ago
“My confidence was on the deck" - Aaron Connolly explains why he has made the move to Italy
2 weeks ago
Every Irish transfer in football, this summer, as several big deals get done
3 weeks ago
Six Irish players make damn impressive 'World XV' that would take some beating
3 weeks ago
The frontrunners for Ireland's 33-man squad for the 2023 World Cup
3 weeks ago
All Blacks media manager explains why Ian Foster appearance was cancelled after Ireland defeat
3 weeks ago
Warren Gatland selects nine Irish players in his strongest Lions XV, right now
Next Page