For months, Ireland has been deliberating on their pick for SportsJOE Sports Personality of the Year and the results are far from surprising.

Out of thirty cracking candidates, three stand alone as front-runners. Katie Taylor, Conor McGregor and Rory McIlroy are miles ahead of the competition.

It's up to you now as to who will take top spot. Our sports writers make their cases below for who they think deserves the honour.

END_OF_DOCUMENT_TOKEN_TO_BE_REPLACED

The Bray boxer is simply the greatest sportswoman this country has ever produced.

She doesn't need hype, a big mouth,a load of tattoos or a big PR machine to promote her ability.

END_OF_DOCUMENT_TOKEN_TO_BE_REPLACED

Her quite, unassuming, down to earth way makes her a personality in that she is so unusual in the trash-talking garbage filled world of sport in 2014. She's real, she's not a 'persona'  made up to sound good in interviews.

All three candidates are solo sports stars who have had to work hard to get to the top of their chosen field. But none has worked harder, had to overcome more and will endure longer than Katie Taylor.

This vote is a simple one.

Deliver the knock-out punch and vote for Katie. 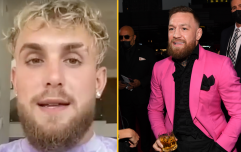 END_OF_DOCUMENT_TOKEN_TO_BE_REPLACED

Conor McGregor gets this award hands down for the mere fact that he has single-handedly brought MMA to the mainstream of a nation.

I would argue, and am preparing for a backlash from the golf-nuts, that MMA is the toughest sport of all three in this final shortlist and that Conor McGregor's meteoric rise to the 5th best in the world at his weight is nothing short of astounding.

He truly is a special kind of sportsman, like Mike Tyson, Michael Jordan or David Beckham. "The Notorious" is the most popular athlete in the fastest growing sport in the world and that's down to his unfathomably high level of skill in all areas of mixed martial arts.

In terms of entertainment factor, this poll is a no-contest as I think we can all agree who we'd prefer to see being interviewed out of the trio of McGregor, McIlroy or Taylor. After all, it is sports personality we're talking about here.

He's got the lot - the talent and the talking with the title on the way!

When it comes to achievements in 2014, nobody comes close to Rory McIlroy. Four massive tournament wins, two of which were Majors, plus the Race to Dubai title and the Ryder Cup success is a career haul for some golfers. McIlroy managed all of that in the six months between May and November.

We already knew he was gifted, heck, he already had two Majors before this year, but in 2014 the Irishman became ‘the man’ when he stepped onto the fairway; the golfer the others feared.

Whatever he goes on to achieve, when we look back on his career this will be the year that will be tagged as the one when he reached that higher plane.

That simply has to be acknowledged.