Did Nate Diaz have the standout line of UFC 196's pre-fight press conference on Thursday night?

One of the highlights of the memorable presser was when Diaz and McGregor traded blows over the depth of talent they have at their disposal for their training camps. Diaz argued that the Notorious has no training partners of note, while his gym is stacked with talent across all disciplines.

McGregor fired back by saying that Diaz was merely trying to take the limelight away from himself by focusing on other members of his gym, to which the Stockton native responded with a clear dig at the Dubliner's "little goofy" movement coach, Ido Portal.

"Who do you train with? You've got that little goofy motherfucker with you. I'm training for real, I've got real training partners. Top ten boxers, top ten jiu-jitsu guys, top ten kick boxers."

"You're playing touch-butt with that dork in the park (with) the ponytail, and I'm the one that ain't got no training partner? I don't think so. You seem to have it all figured out when you're fighting midgets."

The humorous line got a great reaction from the crowd and everyone on stage bar McGregor, of course. As soon as Diaz uttered the "touch-butt" line, UFC president Dana White failed miserably at suppressing his laughter.

White's reaction wasn't shown on the original broadcast by the UFC because of the zoomed-in camera angle, but MMA Weekly's original footage of the event gave us a wider view of the stage.

White wasn't the only one who enjoyed Diaz's zinger. UFC women's bantamweight champion Holly Holm, who was also on stage at the time, also broke her focus to enjoy the line as MMA Fighting's supremely talented photographer Esther Linn captured. 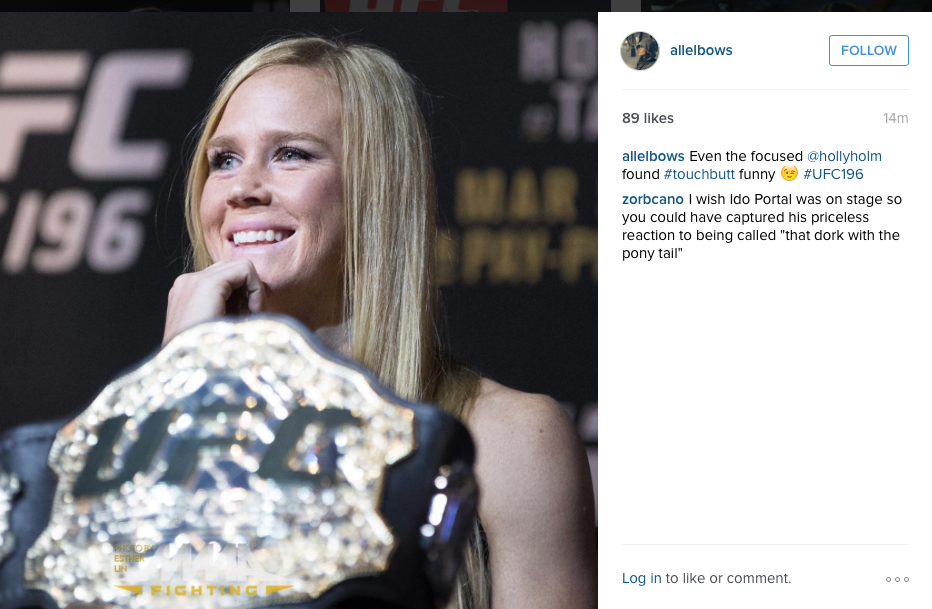 One man who certainly was not amused was the butt of the touch-butt joke himself. Portal threatened to jump on stage and start "smacking heads with his pool noodle" the next time Diaz cracks wise about his credentials.