"I spoke in his native tongue in Rio de Janeiro and I told him he will die."

That's what Conor McGregor revealed that he said to UFC featherweight champion and upcoming opponent Jose Aldo when the pair crossed paths in Brazil on their world tour.

Unfortunately, the bob dummy in The Ultimate Fighter gym got no such forewarning from him as The Notorious put on an open workout for the media ahead of his highly anticipated title showdown on July 11 (which is in just six weeks time people!!)

The Irish featherweight indulged those present by ripping some body shots to the dummy before becoming determined to knock it on the arse that it doesn't have. 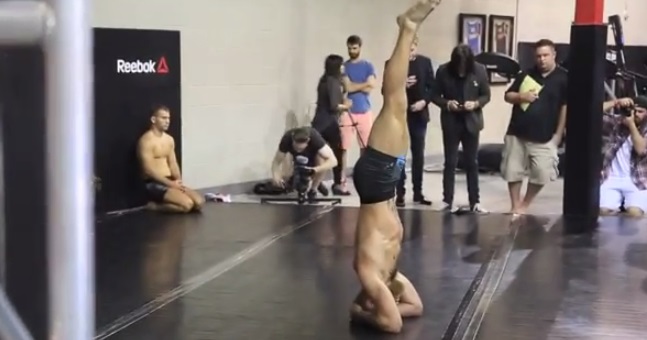 END_OF_DOCUMENT_TOKEN_TO_BE_REPLACED

Other highlights from the workout included doing some extensive pad work with Owen Roddy and exhibiting some gymnastics that would make even Georges St-Pierre jealous.

McGregor wrapped up the session with some intense words about his journey to this point in the world's biggest mixed martial arts promotion.

"They knew I was coming, fight after fight. I burst onto the scene, called everyone out, knocked everyone out. And it's like 'he's not for real, he's not fought stiffer competition'. And then as each individual continues to get knocked out then you've got to say 'holy shit, now he's creeping up on me'.

"And you can still try to lie to yourself and tell yourself that this is a joke, it's not going to happen. And then guess what, the boxing fight happened where I knocked my opponent down, bounced off the cage and went straight for him. Now there's no running, now it's before you.

"So then the world tour was just the culmination of me looking him dead in the eye and telling him [Aldo] what was going to happen to him. I knew he does not speak English. So I spoke in his native tongue in Rio de Janeiro and I told him he will die and that was it."


popular
Talksport presenter puts Martin O'Neill to the pin of his collar over Declan Rice and Jack Grealish
World Cup Power Rankings: The top eight pundits of the tournament so far
Ariel Helwani shares Paddy Pimblett WhatsApp messages as spat becomes public
Rory McIlroy explains 'falling out' with Shane Lowry that lasted a few years
"There's no soccer, hurling, or rugby" - Kilcoo's secret to success
World Cup Power Rankings: The top 10 players at the tournament ahead of the quarter-finals
Roy Keane scores winning goal past Micah Richards in ITV v BBC pundits match
You may also like
1 month ago
Conor McGregor almost unrecognisable after shaving off iconic beard
1 month ago
Dana White confirms Conor McGregor is not in the USADA testing pool
2 months ago
Hasbulla signs five year deal with UFC 'worth more than many fighters'
2 months ago
UFC fighter Elias Theodorou has died, aged just 34
2 months ago
John Kavanagh and Johnny Walker kicked out of T-Mobile Arena during UFC 279 main card
2 months ago
Conor McGregor took exception to one part of Nate Diaz victory speech
Next Page