A video has been doing the rounds on social media of former UFC fighter Josh "The Dentist" Neer absolutely annihilating some randomer in his gym.

The unidentified man takes a serious amount of punishment during the 14-second clip eating some massive elbows and receiving a nasty soccer kick to the face. Neer was unrelenting in the video and looked like he had no intention of calling the beat down to a halt until two people intervened and broke it up.

Neer revealed the story behind the clip to Bloody Elbow. He explained how the man was abusing him on Facebook and requesting a fight with him.

'Basically the guys a dumbass and been talking shit about MMA fighters for a month. On and on, I usually ignore him but this Saturday he wrote me on Facebook the message I gave. He had written 10 messages to me talking shit which I ignored, but this time I said if you really want to fight come to the gym Monday at 5:30.

'I don't know what his problem is but he's a big guy, like 6-6 and 270 pounds and just acts like a bully. That what he seems like to me, just a bully.

'He showed up at 6:10, 40 mins into my practice. And then I asked him if he wanted to fight Rakim (Cleveland) or me and Rakim is bigger then me so of course he chose me.

You can check out some of the messages the man was sending Neer below. 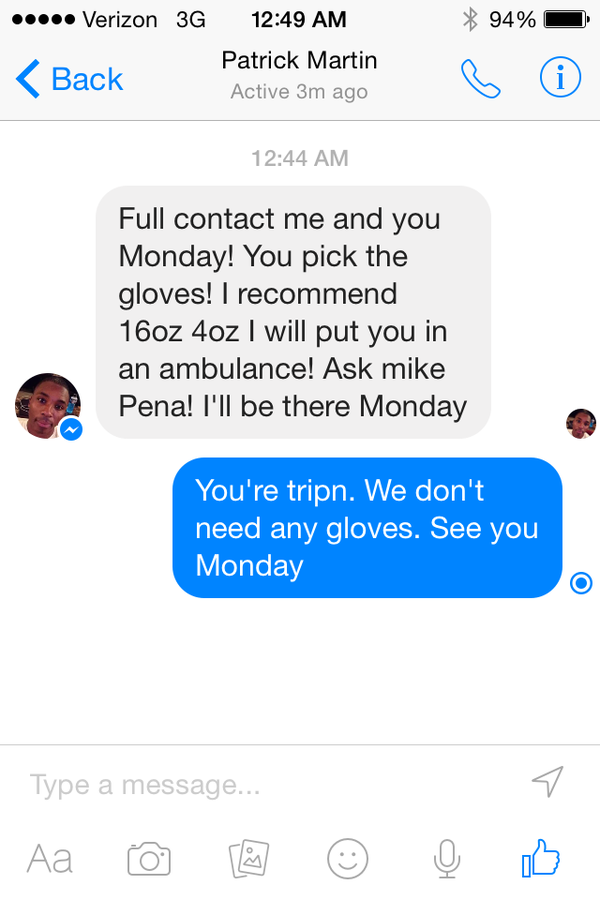 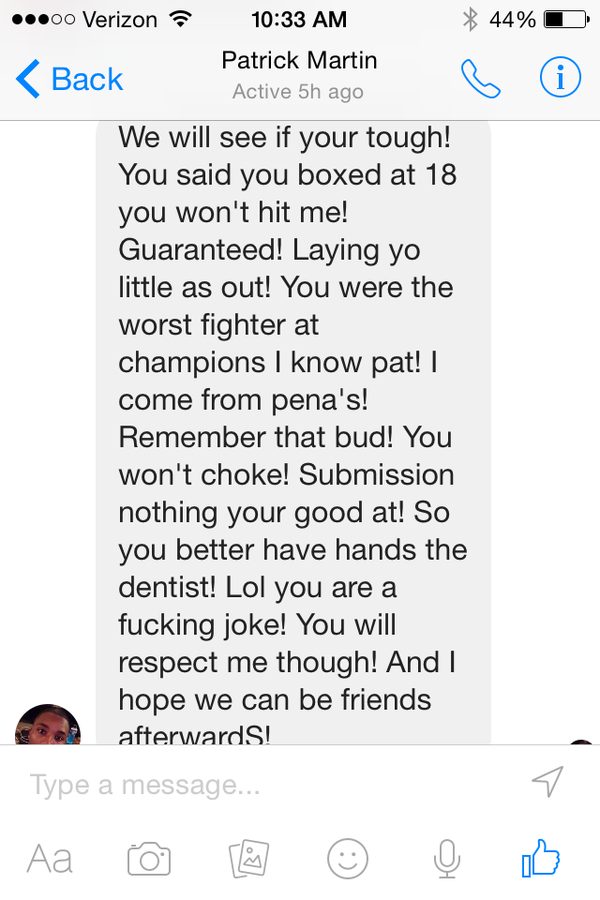 
popular
Ranking the best county GAA songs of all-time (32-1)
"It was unfair on the Galway backs” - Tomás Ó Sé admits that Kerry benefitted from unfair rule
"I’ve never heard someone say something as stupid” - Katie Taylor blasts Jake Paul's rematch comments
"I don’t trust you" - Joey Barton delivers brutal dismissal of Irish defender
Antonio Conte 'banishes' four Tottenham players from first-team
"I remember just hugging this Irish guy" - How one Kiwi rugby star reacted to Ireland's historic series win
"I'll ask for everyone that comes to the game to wear purple and roots for us" - Pat Fitzgerald
You may also like
1 month ago
Jorge Masvidal speaks about defending BMF title against Conor McGregor
2 months ago
Dana White reveals who Conor McGregor could fight on UFC return
2 months ago
Your guide to a great weekend of sport and how to stream it all
2 months ago
Conor McGregor says he knows his next UFC opponent and fight date
3 months ago
Commentating cage-side, Daniel Cormier missed the UFC knock-out of the year
3 months ago
Conor McGregor responds to Michael Chandler's callout after UFC 274
Next Page