The veteran Judoka is most famous for his 13 fight stint in the UFC and most recently competed at Bellator 127 when he was finished by Fernando Gonzalez.

While Parisyan has no upcoming fight announced, he's still developing strategies to show off his slick Jiu-Jitsu game and has recently developed a brand new choke. 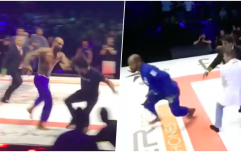 END_OF_DOCUMENT_TOKEN_TO_BE_REPLACED

Exhibiting the so-called "Armenian necktie," Parisyan showed TeachMeGrappling how to set up the choke from side control when he lulls his opponent into working onto a hip before pressing the inside of his forearm against the throat, throwing his near-side leg over the head and simultaneously clasping his hands together.