To say it all kicked off would be an understatement.

There was a chaotic end to the main event of the BJJ Stars card in Sao Paulo this weekend, when Erberth Santos furiously sprinted off the mat to attempt to attack several teammates of his opponent, Felipe Pena.

According to a report in The Jiu-Jitsu Times, the carnage began just a couple of minutes into the match, when Santos appeared to injure his knee in a Pena sweep. 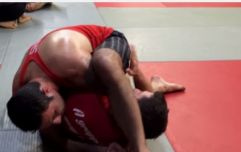 END_OF_DOCUMENT_TOKEN_TO_BE_REPLACED

While Santos' knee was tended to, he could be seen engaging in an aggressive back-and-forth with someone off camera, believed to be a member of Pena's team.

Whatever was said, Santos didn't take kindly to it and leapt off the mat to confront the individual, reported to be Pena’s teammate Daniel Thebit, with a woman sent flying in the melee.

Despite the best efforts of the security and event staff to restore order, Santos could not be calmed down and proceeded to sprint after another black belt on Pena’s team, Servio Junqueira.

Eventually, Santos was removed from the arena and Pena was awarded the win and BJJ Stars belt via disqualification, while the brawl has since been condemned by several high-profile individuals in the Jiu-Jitsu community.

"It’s a shame what happened, despite the victory I’m sad with today," Pena said of his win. "I got ready and I dedicated a lot to give a show for you and unfortunately ended unexpectedly! Sport is not that."