Top ranked UFC middleweight Tim Kennedy has a stalker, and its name is controversy.

The number 13-ranked 185-er in the UFC is one of the most polarising personalities in the sport. His willingness to speaking his mind regardless of who he offends has garnered him a strong fan base, but has also turned him into a heel in the eyes of a lot of fans.

A recent post on social media about PTSD (post-traumatic stress disorder) has been heavily criticised by a lot of fans. Kennedy, a Green Beret, admitted to killing women and children and witnessing "things horror movies are made of" during war before explaining why he believes he does not suffer from PTSD.

Kennedy has worked with vets to help them try to overcome their PTSD and his post was intended as a message of encouragement to those who suffer from it to "find something bigger than yourself and pour every ounce of who you are into it."

However, there was one line in the post that people have been taking issue with.

"I'll tell you how to get better. You stop being a pussy."

END_OF_DOCUMENT_TOKEN_TO_BE_REPLACED

In 2013, the United States Department of Veterans Affairs released a study on suicides between 1999 to 2010. The results showed that approximately 22 veterans were committing suicide per day, which equates to one every 65 minutes, on average.

With this n mind, it's unsurprising that Kennedy's comments received such backlash. 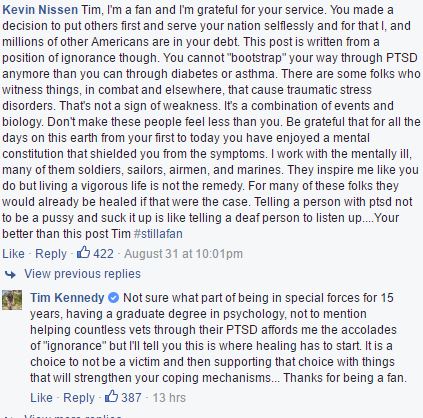 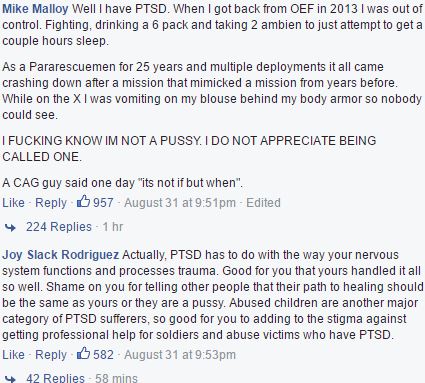 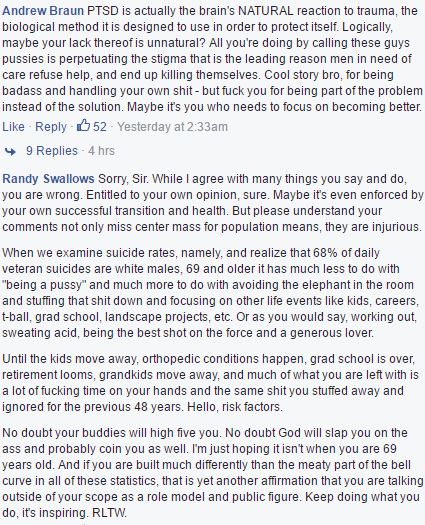