This bizarre beef between Gegard Mousasi and Conor McGregor doesn't appear to be slowing down any time soon.

After knocking out legendary fighter Vitor Belfort at UFC 204, Mousasi looks like he's just a win or two away from thrusting himself right into the middleweight title frame. McGregor, on the other hand, is set to fight Eddie Alvarez for the lightweight strap at UFC 205.

Odds are they're never going to fight each other inside the Octagon, but that hasn't prevented Mousasi from perpetuating the beef by continuing to talk smack about the charismatic Irishman.

The beef all stems from the Dutch fighter taking aim at McGregor in his post-fight press conference in Manchester. He claims that McGregor took issue with the call-out and responded to him via direct messages on Twitter.

Less than week after laying into McGregor on the MMA Hour, Mousasi took aim at the Notorious again on Fight Society podcast. He offered more details on those infamous Twitter DMs, suggesting they could have been a direct response to his claim that McGregor was copying Mayweather's style with his constant talk about money.

"I think his butt was hurt. He was sending me some messages. I don't know what the crap he was talking about. I said to him, what's he going to do about the 50 kilos (weight difference). He was being smart or I don't know what the fuck he was thinking. He was lighter than a pound and he can cut ear to ear. I don't know, maybe he was saying 'wait, I can beat you,' but that's retarded. If he wants to fight just say, 'Next time I fight you.' Don't come and be philosophical about it. The guy has too much time."

He believes that while McGregor is well able to dish out trash-talk, he's not as good at receiving it. As if to prove this point, Mousasi then began slagging off his body art.

"The guy says something about everybody, but as soon as you say something about him he's a cry baby. What the fuck? I think the fame got to his head. If you put a tiger and a gorilla and your name on your chest and belly, you're retarded. Come on, that's not normal behaviour. He's full of himself. He can go fuck himself." 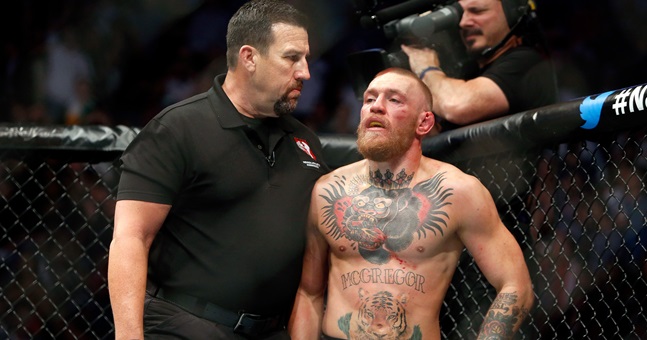 While relentlessly tearing into McGregor, Mousasi maintained his trademark calm demeanour. He confessed that because he's so much bigger than McGregor physically, that his trash-talk has less of an effect on him.

"It's ok to promote fights, but you can overdo it. He has no class. He would do anything for a little bit of money, probably he's a prostitute. I don't know what the fuck he is. It doesn't work like that. He can have a big mouth, but when he's man-to-man with me alone, he's not going to talk like that."

Harsh words from the "Dreamcatcher." Surely McGregor won'be able to ignore them.