It is not every week that Tim Kennedy features on our humble pages. This is no ordinary week.

The UFC middleweight, who has beaten the likes of Robbie Lawler and Michael Bisping in the past, took to social media, earlier this week, when news broke of Yoel Romero failing a drug test.

END_OF_DOCUMENT_TOKEN_TO_BE_REPLACED

Kennedy lost to Romero at UFC 178, some 18 months ago, and has not fought professionally since. He was peeved when his conqueror was popped on a doping charge.

Then, life got colourful.

Kennedy works as a sergeant first class with the Texas National Guard having previously served in 7th Special Forces Group.

He is well used to getting online abuse from what he calls 'military trolls' but one threat alerted the Federal Bureau of Investigation. in an Army Times interview, Kennedy explained:

"Then I said, 'I'm kind of desensitised to this stuff, so maybe you should tell me what my level of alarm should be'." 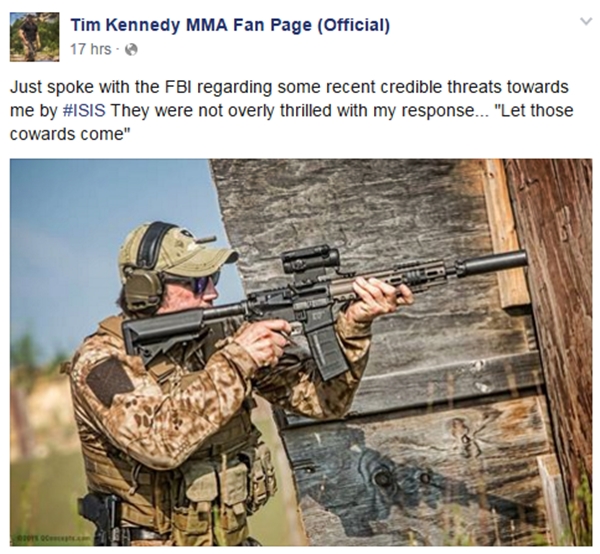 END_OF_DOCUMENT_TOKEN_TO_BE_REPLACED

"What’s the definition of terrorism?" Kennedy proposed. "It’s to achieve an objective through the use of force and fear.

"I teach people how to live with threats like this. Who would I be to be cowering to a bunch of gutless cowards acting like a bunch of tough guys online?"

What a bloody legend.