UFC 194: Aldo v McGregor - What time it is on and where to watch it

You don't want to miss this one.

Conor McGregor will finally get his chance to become the first featherweight to defeat Jose Aldo at UFC 194. The long-standing champion was forced to withdraw from their original scheduled bout at UFC 189, which saw McGregor knock out late replacement Chad Mendes to become the interim featherweight champion.

The co-main event sees the two top middleweights in the world, Chris Weidman and Luke Rockhold, slug it out for the 185 lb title, after the next number one contender is decided when Yoel Romero takes on Ronaldo "Jacare" Souza.

Honorary Irishman Gunnar Nelson also takes on elite grappler Demian Maia, while main card proceedings will kick off with a featherweight clash between two of the division's best in Max Holloway and Jeremy Stephens. 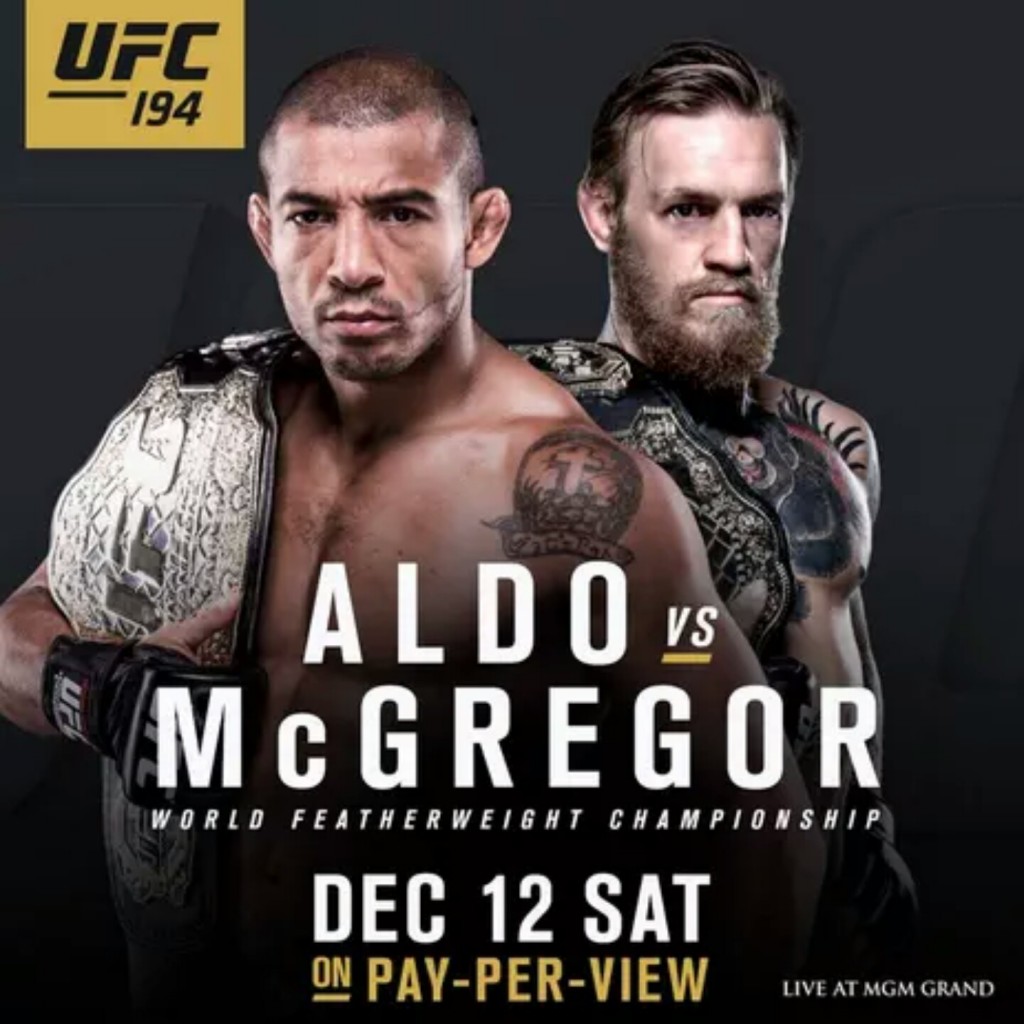 UFC 194 takes place at Las Vegas’s MGM Grand Garden Arena on Saturday December 12, with the main card beginning at 3am on Sunday morning (Irish time). The preliminary card is due to kick off 1 am, while the early prelims begin at midnight.

However, with such a stacked event, even casual fans will want to tune in for the whole main card (at least) which commences at 3 am.

BT Sport will be showing all the action with start time to be confirmed closer to the fight.

If you do not have that channel in your TV package you can buy the pay-per-view via Fight Pass or UFC TV in HD for €17.99 or standard definition for €15.99.

If you don't like either of those options, but also don't want the result spoiled, you could go Full Mugabe Media Lockdown and wait for 3e to show the entire main card at some stage the following week (TBC).

UPDATE: The viewing party scheduled to take place at Bunker Nightclub at the Point Village has been moved to the Red Cow Inn, Naas Rd. Doors open at 11 pm with last entry at 1 am. It's a strictly over 18's event featuring a full late bar along with DJ acts. Tickets cost €20 and you can buy them here.

The Living Room on Cathal Brugha street will also be live-streaming the main card at a ticketed event after normal serving hours. It's a no alcohol event with doors opening at midnight from Murrays bar, with the Living Room opening at 3 am. Tickets must be pre-purchased from The Living Room and cost €20.

If you know of any other viewing parties around the country, don't hesitate to send the information to editorial@sportsjoe.ie or hit us up on Facebook and Twitter


popular
Rob Kearney taught a classic GAA lesson when he tried to have the craic in second game back
Ex-Down boss Paddy Tally will be part of Jack O'Connor's staff if he's offered the Kerry job
Shane Lowry had no problem setting reporters straight at Ryder Cup briefing
Kieran McGeary on Conor Meyler and how things just "clicked" this year
Galway fans' frosty reception for Davy Fitz doesn't make any sense
GAA could learn a thing or two from AFL's parade and self-promotion
The scenes in Newbridge as the biggest hit and hope ever knocks Moorefield out
You may also like
2 months ago
UFC appears to have signed a new Irish fighter
2 months ago
Conor McGregor labelled an 'easy payday' who can't compete with top UFC fighters anymore
2 months ago
Khabib says McGregor is "finished" as Dos Anjos makes his play
2 months ago
Shocking post-fight footage shows McGregor threat that upset Poirier so much
2 months ago
Conor McGregor posts first Instagram since last night's defeat
2 months ago
"I'm nice, now I'm mean, I started nice, now I'm back to mean" - Dominick Cruz slams McGregor's changing personas
Next Page