Is all fair in 'No Love' and mental warfare?

Trash talk is a strange one.

In general, there's no malice behind it. Everyone's aware that it's primarily used as a tool to promote a fight. Once the two fighters let their hands, feet and grappling do the talking inside the Octagon, every nasty thing picked up by a mic in the build up to fight night is usually forgotten about as the battle-earned respect sets in.

END_OF_DOCUMENT_TOKEN_TO_BE_REPLACED

Not all trash talk is equal though. There are some subjects that are off limits and, even if the intended target doesn't take offence, the fans will be sure to call out the source for overstepping the mark.

It happened when Conor McGregor dropped tat Nazi comment in reference to Dennis Siver, and it might just happen again with Tj Dillashaw's latest jab at Cody Garbrandt.

END_OF_DOCUMENT_TOKEN_TO_BE_REPLACED

A brief background to the duo who will be slugging it out for the bantamweight title at UFC 213 -  TJ Dillashaw used to train with Garbrandt under Urijah Faber at Team Alpha Male. Dillashaw moved gyms to work with Duane Ludwig in Colorado, who has a fairly tense beef with Faber.

This rivalry has been hyped into a grudge match to sell the new season of the Ultimate Fighter, with both fighters coaching opposite teams just to add fuel to the fire. Garbrandt claims he has footage of himself knocking out Dillashaw in sparring from the Team Alpha Male days and as he explained on UFC Unfiltered, Dillashaw wants to see it...  if it even exists.

"You know what, I could care less what happened then. I get to make, on pay-per-view, some film of me beating Cody’s ass that the world’s going to see and I’m going to make a lot more than selling it to TMZ. So they can do whatever they want with the practice room because we all know how it went down. So I could care less. Release the footage." 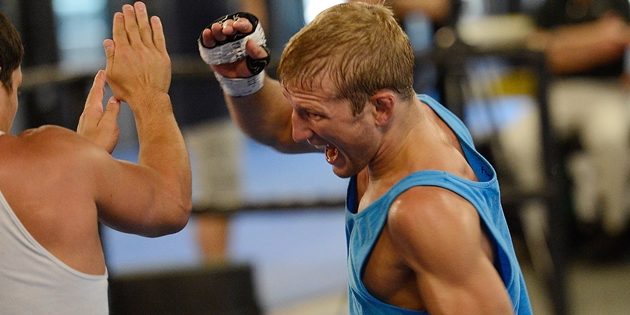 It was all going fine until Dillashaw dropped the following line:

"The charity should be something for kids without fathers so they don’t grow up to act like Cody.”

END_OF_DOCUMENT_TOKEN_TO_BE_REPLACED

As far as trash talk goes, that one landed slightly below the belt. Garbrandt's biological father, a drug addict and a convict, was absent from his entire life. It was a classless comment to make, but one that is unlikely to affect Garbrandt too much considering he came through the other side of Dominick Cruz's 'daddy issues' remarks with that coveted golden strap rapped around his waist.

The fact that he is regurgitating trash talk from another fighter that didn't work is arguably worse than the actual comment itself. However, when this season was announced, nobody was expecting the 'keep your fling on a leash' guy and the man who was verbally pulverised by Cruz to deliver in the smack talk department.

Should be one hell of a fight though, not to be missed. These athletes don't need to talk, they are among the most elite fighters on planet Earth right now.