There was a consensus across the ESPN panel.

Michael Bisping and Stephen A Smith were the most dismissive of Conor McGregor's chances of ever returning to the summit of the UFC. Dominick Cruz, meanwhile, believes McGregor needs to get his head straight.

While the manner of his loss to Dustin Poirier was horribly unfortunate, there is no way around it now. Conor McGregor has now lost three of his last four UFC fights and only had one win in the promotion since November 2016.

END_OF_DOCUMENT_TOKEN_TO_BE_REPLACED

'The Notorious' endured a tough opening round in his UFC 264 headliner against Dustin Poirier but looked to have weathered the storm after being taken to the mat and worked over. The fight changed in an instant, however, as McGregor rocked back on his left leg after missing a punch on Poirier and awkwardly snapped his lower tibia [shinbone]. 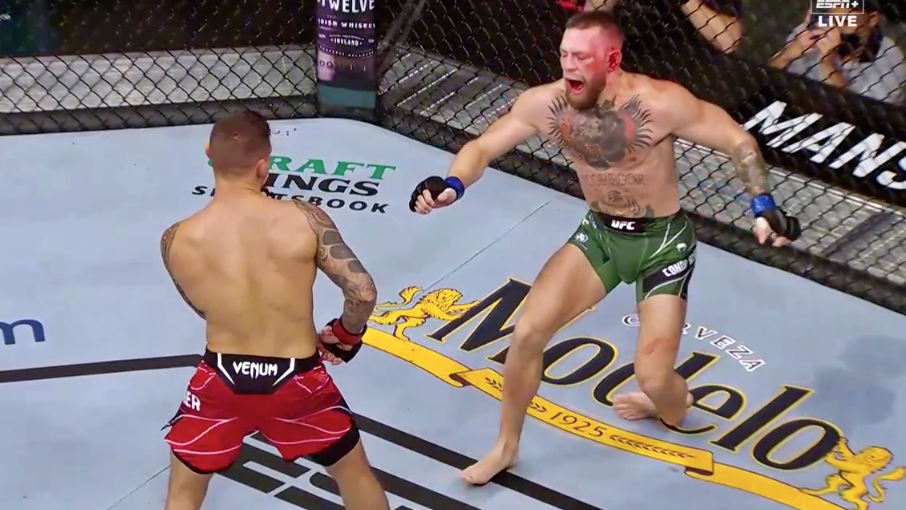 While McGregor may have claimed to have been winning the contest until that awful moment, only his most blinkered admirers could agree. Indeed, all three judges scored the first round to Poirier, with two of them scoring it 10-8.

The result sees McGregor drop to 22-6 in his MMA career and 1-3 in his last four fights. As the pay-per-view event wrapped, Stephen A Smith declared we had officially seen the last of McGregor in his prime. Bisping, a former UFC middleweight champion, went one further.

"He was also finished in three of those last four fights," Bisping began.

"He had an amazing career and was a two weight division champion. It was something that was never done before. But what we're seeing right now, that is nothing in any shape or form that resembles the Conor we saw in 2014.

"That guy that took over the sport, he's gone. He's dead.

"Like it or not, he was finished tonight. [Poirier] checked a leg kick, Conor's leg fractured and, besides that, he was getting dominated for the entire round. He was take down, he didn't have very good defence on the floor. He ate a lot of elbows.

"Listen, the man has done a lot of amazing things in the sport, but his time in the sun is over."

END_OF_DOCUMENT_TOKEN_TO_BE_REPLACED

Cruz, a former UFC bantamweight champion, feels McGregor switching from nice guy to bad guy three times in his last four fights shows he is unsure of himself in the sport.

All three men on the panel agreed that McGregor went too far with his comments directed at Poirier and his wife, Jolie.

"That's going too damn far," said Smith. "Now, I cover the worlds of basketball, football and things of that nature and the reality is this - if this was any of those athletes [saying what McGregor said], we'd be all over them for the type of language he used and the way he talked about Dustin Poirier's family.

"There is absolutely, positively no excuse for Conor McGregor to engage in that tasteless, classless behaviour.

"I understand that this is the fight game, and we see a lot of stuff going on from time to time. But, to be on your backside with a broken leg and to go at Dustin Poirier that way - where you are attacking and insulting the man's wife - that's why Dustin had to be restrained from going after Conor... because you're talking about the man's wife. It was really uncalled for."

Bisping is sure that McGregor, and many of his followers, will look at the fight and say he could have won if it were not for the leg break.

For those that feel that way, Bisping had some words:

All three of the panel agreed that the fight to make in the lightweight division is Poirier against reigning champion Charles Oliveira.

Luckily for 'The Diamond', and the panel, UFC President Dana White agrees with them.


popular
Roy Keane's issue with Argentina star could rival Graeme Souness and Paul PogbaA~WQA~~~~~~AAAA
Roy Keane cracked up Ian Wright and Gary Neville with England team spirit remark
Lionel Messi makes Gary Neville eat his words after "silk pyjamas" comment
Roy Keane takes moment on TV to pay tribute to his old team in Cork
The nine England World Cup footballers who could have played for Ireland
Man United youngster causes scrap from the bench after throwing ball at Australia player
'I was so stressed the week before the All-Ireland and I ended up having a panic-attack' - O'Shea and O'Sullivan open up
You may also like
2 months ago
Hasbulla signs five year deal with UFC 'worth more than many fighters'
2 months ago
UFC fighter Elias Theodorou has died, aged just 34
2 months ago
John Kavanagh and Johnny Walker kicked out of T-Mobile Arena during UFC 279 main card
2 months ago
Conor McGregor took exception to one part of Nate Diaz victory speech
2 months ago
Nate Diaz and Tony Ferguson tossed together for UFC 279 main event after wild 24 hours
3 months ago
Your guide to a huge weekend of sport and how to watch it all
Next Page