Bellator featherweight champion Patricio 'Pitbull' Freire has never been to Ireland before, but he vowed to visit the 'beautiful country' soon.

Fighting isn't just professional, it's personal for Patricio 'Pitbull' Freire. When Daniel Straus tapped frantically from that second-round guillotine at Bellator 178, Patricio became a two-time 145 lb king. Between title reigns, Pitbull had a life-changing event. This was highlighted by how he celebrated.

The Brazillian immediately scaled the fence in jubilation, an act that resulted in him being slapped with a $2,500 fine by the commission overseeing the card. He then brought his baby boy into the cage and gifted him the strap. His son, now two years old, is 'absolutely' what's keeping him motivated ahead of his rematch against Daniel Weichel in Rome on July 14, a card that also features the promotional debut of undefeated Tipperary middleweight Will Fleury.

"I'm not letting anyone take away that gift from my son." 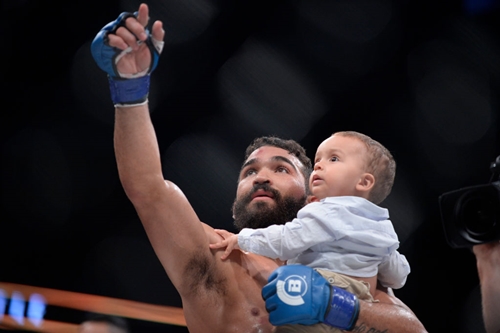 Patricio and his older brother Patricky, who competes in Bellator's lightweight division, have been causing a stir in Ireland of late. The Pitbull brothers have had a very public rivalry with SBG Ireland. The origins of this transatlantic beef may be traced back to an Instagram post in which Patricio was pushing for a fight between James Gallagher and his teammate Luiz Victor.

END_OF_DOCUMENT_TOKEN_TO_BE_REPLACED

'The Strabanimal' amassed a 7-0 professional record as a featherweight. He'll make his bantamweight debut in his next fight against 10-1 Ricky Bandejas in August. The incentives for dropping down are obvious. If Gallagher wins, he's been promised a crack at the 135 lb belt. However, Patricio believes his rival has done a runner.

"It started with a piece of shit called James Gallagher. I'm not sure if you've heard of him. He keeps taking pictures with Bellator belts and saying he's going to get the title. But he ran away and dropped down to the bantamweight division because he heard about this possible SBG and Pitbull brothers challenge."

"He's a Conor McGregor nuthugger. I haven't seen anything special in his style. I don't care if he's ready for a title fight or not, I'd fuck him up."

I'll fight you in Croke Park. Bring your daddy @TheNotoriousMMA to see you get beat up from the front row. @StrabanimalMMA @BellatorMMA

END_OF_DOCUMENT_TOKEN_TO_BE_REPLACED

Patricio confessed to being a Conor McGregor fan.

And that's where the compliments about Straight Blast Gym ended. He reckons some of McGregor's teammates are trying to copy the persona that made him a global superstar without having the requisite skills to back it up.

"All these guys from SBG, they try to be like Conor McGregor and talk shit, but Conor McGregor walks the walk too. They haven't done shit to be talking like they do. I think a lot of his team are trying to be him and they're doing a poor job of that. They're trying to create a persona that isn't there and they haven't done anything to warrant that type of behaviour."

Saw @BellatorMMA @ScottCoker plans to hold shows in Ireland and people mentioned a SBG vs another team for an event, so let’s do a full card Pitbull Brothers vs SBG. We’ll straight blast you harder than a dolly through a bus glass window. @TheNotoriousMMA is invited. https://t.co/Lm3XTPwZZz

The other SBG fighter who Patricio has a problem with is Wexford native Brian Moore, who competes in Bellator's 145 lb weight class. Moore proposed the idea of a gym vs gym event involving SBG in an interview with Peter Carroll of MMA Fighting. The Wexford native added that he didn't believe any other team would accept the challenge.

Patricio didn't take too kindly to this comment. He even said that if Bellator allowed it, he'd be up for fighting Moore and Gallagher at the same time because, according to him, 'maybe that way it would be a little competitive'.

"And there's another fuck from SBG called Brian Moore who did an interview saying that Bellator should do an SBG vs another team card in Ireland. He said that he didn't think any team would be brave enough to accept it. But SBG isn't anything. They just talk trash. They haven't done anything besides what Conor did. Conor is SBG. SBG isn't anything. I saw that and said, 'Let's the do the Pitbull Brothers team vs SBG." 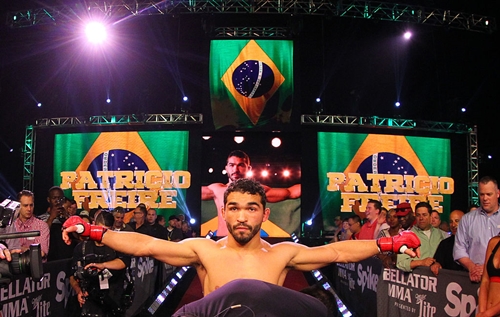 "The best fans in the world"

Patricio's beef with Ireland only extends as far as SBG. He actually had some very complimentary things to say about Irish MMA fans, even if they don't always return the favour. He's well aware that the animosity he receives from the Irish is just a bi-product of their incredible support for their homegrown heroes.

"It's amazing and very beautiful how united the Irish fans are and how they back their fighters, win or lose. I haven't seen anything like that in any other country. No one else comes close to how supportive the Irish fans are. Some of them are even more supportive when their guy loses. It's just amazing. I have a lot of respect for them, although some of them talk trash to me. I have nothing against Ireland. It's a beautiful country."

Very impressive how supportive Irish fans are. Beautiful to see. Second only to how delusional some of their fighters are. It’ll be nice to fight in Ireland,but time to focus in Rome. I’ll have a big fish to fry, then return home with a piece of gold these fools can only dream of

Brazillian MMA fans are often thought of as the most nationalistic in the world, in any discipline. They boo any foreign fighters competing against one of their own while drowning them under a deafening deluge of "uh vai morrer" chants, the Portuguese for 'You're gonna die'.

However, Patricio sees a negative trait in some Brazilian MMA fans that he just hasn't seen from the Irish.

"Lots of the Brazilian fans only care about you when you're winning. So I don't give a damn about most of the people. I care about my family, my team, my friends and real fans. Some people from Brazil will cheer you on whether you win or lose, they'll be there with you. But most Brazilians like champions. After you lose, you're nothing for most of them."

"I love my country, but I know what happens here. So, to me, Irish fans are the best in the world."

Carlsberg don't do MMA fans, but if they did, they'd probably drink Guinness.

If @BellatorMMA allows I’ll fight the both of you at the same time, perhaps that way you can get past the first round.


popular
Ireland team to play Wales: Andy Farrell's XV, the big calls and bold cuts
Everton release brutal 59-word statement to confirm Anthony Gordon departure
Jaden Sancho can't hide his smile as Old Trafford give heartwarming reception
"Every team did it!" - Paul O'Connell on Roy Keane comment to Ronan O'Gara that he couldn't deny
Five confirmed changes and guidelines to have big impact on 2023 Six Nations
Owen Farrell praises Johnny Sexton in revealing interview ahead of Six Nations
"It's crazy to think Bundee Aki might come straight in and start against Wales"
You may also like
2 years ago
"When you grow up in these places, if you can't fight you're f***ed" - James Gallagher
3 years ago
James Haskell responds to MMA call-outs by Neil Best and Andy Powell
3 years ago
James Gallagher set to headline Bellator show in Dublin
3 years ago
'I really think that me and Ben Askren are gonna fight' - Dillon Danis
3 years ago
'Bellator has a Dublin show in September so I'm thinking of bothering them about it' - Heather Hardy
3 years ago
'Katie's an Olympic gold medallist who unified the belts but is not getting paid like a man'
Next Page