Nate Diaz should be 2-0 against Conor McGregor, according to his older brother Nick.

You may remember that the more experienced Diaz brother was not permitted to corner Nate during his UFC 202 rematch with 'The Notorious'.

Nick still had an outstanding payment due to the Nevada State Athletic Commission stemming from his 2015 failed drug test, when the discovery of marijuana metabolites in his system was punished with a five-year ban and a $165,000 fine but, on appeal, that was reduced to 18 months and $100,000.

Nick Diaz will not be allowed to corner his younger brother at UFC 202 https://t.co/U9F1TzZSab

END_OF_DOCUMENT_TOKEN_TO_BE_REPLACED

As of August, when the rematch between Diaz and McGregor took place, Nick still had a balance of $75,000 to pay off and therefore the NAC denied him a corner's licence.

The Irishman came out on top in his second meeting with Nate Diaz, who had submitted him at UFC 196 five months earlier, but Nick reckons the fight would have gone differently had he been allowed to speak to his brother in between rounds.

END_OF_DOCUMENT_TOKEN_TO_BE_REPLACED

"It's just like one inch. That's the difference with how that fight could have gone and, as far as I'm concerned, I definitely would have been that inch," Diaz said on Opie Radio.

"They just wanted to keep me out of there. It would've definitely helped him out a lot. 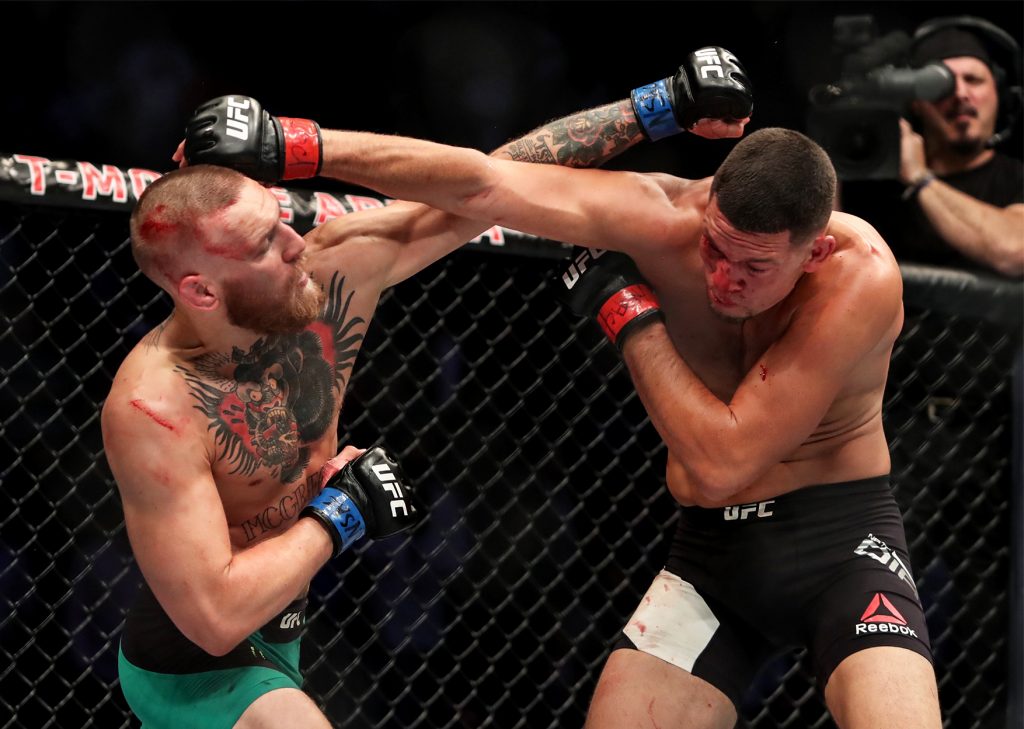 "I was seeing things in that fight that I would have called and told him. I was seeing things that he wasn't seeing because I do these things and I know how they work out for me. It's almost like a formula and I'm like 'This is what you do!'

END_OF_DOCUMENT_TOKEN_TO_BE_REPLACED

"Come the third and fourth round, I think if I had been there then we'd have been able to put it together and get that guy out of there.

"Gilbert Melendez was there and the thing is with Melendez, he's great and he's really smart. He knows what he's looking at but they're training partners so they're kind of opposites, stylistically, because he's more of a wrestler who goes on top. 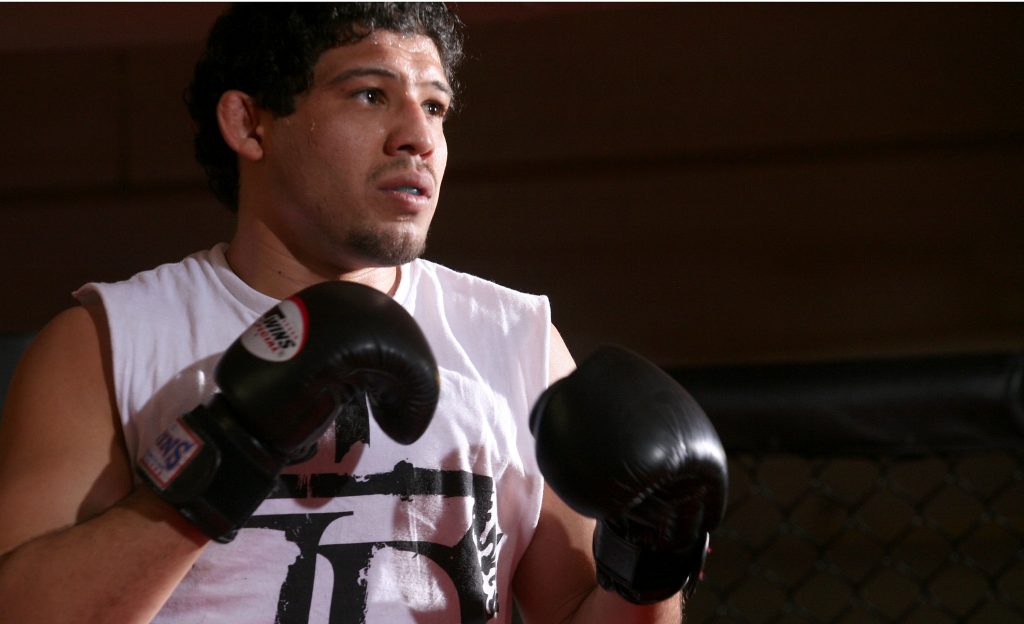 "I'm not saying it wasn't helping having Gilbert there. Gilbert wasn't necessarily telling him to do the wrong stuff but he wasn't going to see the things I was seeing."

The UFC 202 main event will go down as one of the fights of the year as it descended into a back-and-forth, bloody brawl between two rivals who refused to give up.

But in terms of technique, Nick Diaz witnessed aspects of McGregor's game that his brother would have been able to exploit but, unfortunately, he wasn't even in the arena.

"I would have told him not to throw punches at that dude at all because he's going to sit there and watch you and try to counter everything," Diaz continued.

"So all you need to do is fake at him, flick at him and fuck with him. And that's how you do that. 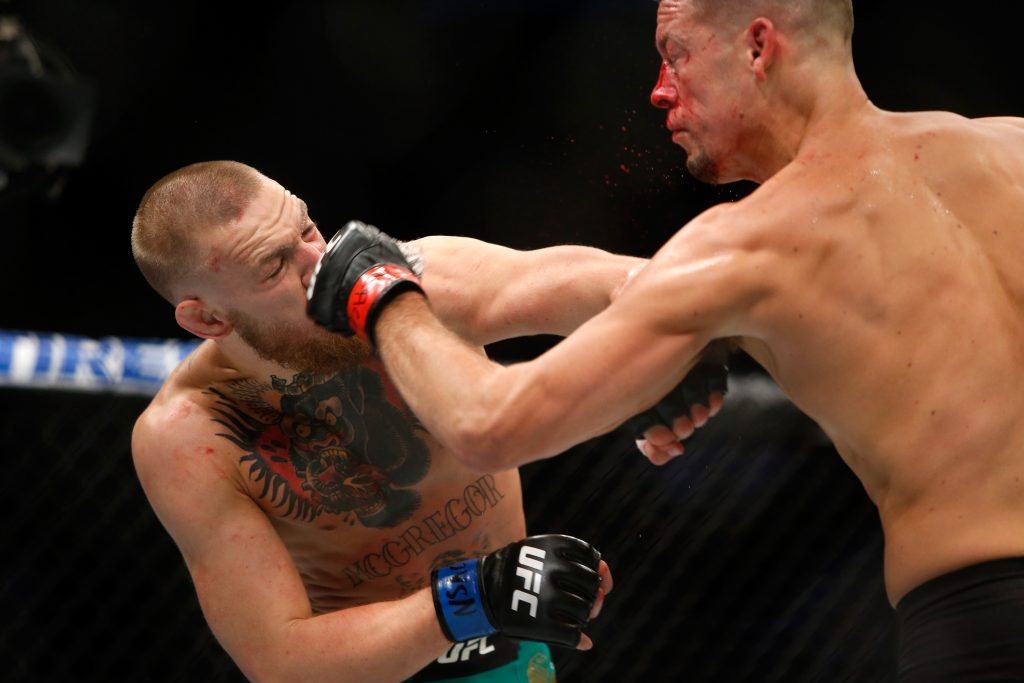 "He went out there and just didn't have it together in the first round, and I think I could have clicked him into the right mindset."

The Diaz brothers' rivalry with the reigning UFC featherweight and lightweight champion looks set to continue, with Nate a very realistic potential next opponent for McGregor in the most anticipated rubber match in UFC history.

Nick, a former Strikeforce welterweight champion, has also accused McGregor of modelling his trash-talk on his own just over a week after attending the Dubliner's UFC 205 after-party in New York City.

"Conor McGregor has copied my model and mixed it with Floyd (Mayweather)," Diaz said.

"I don't know how to act like Floyd and be that money guy because I grew up broke and we just don't act that way.

"I don't want to act like a douche like that... I never put on an act, I was legitimately pissed off and for reasons.

"I never stepped out of line with anybody. I never do. People just start running their mouths at me and then I call them on it like 'Yeah motherfucker. You know I worked harder than you!'"


popular
World Cup Power Rankings: The top eight pundits of the tournament so far
Rory McIlroy explains 'falling out' with Shane Lowry that lasted a few years
Talksport presenter puts Martin O'Neill to the pin of his collar over Declan Rice and Jack Grealish
World Cup Power Rankings: The top 10 players at the tournament ahead of the quarter-finals
Ariel Helwani shares Paddy Pimblett WhatsApp messages as spat becomes public
Roy Keane scores winning goal past Micah Richards in ITV v BBC pundits match
Gary Neville sticks up for Ronaldo as contextless pictures and videos taken as gospel
You may also like
1 month ago
Conor McGregor almost unrecognisable after shaving off iconic beard
1 month ago
Dana White confirms Conor McGregor is not in the USADA testing pool
2 months ago
Hasbulla signs five year deal with UFC 'worth more than many fighters'
2 months ago
UFC fighter Elias Theodorou has died, aged just 34
2 months ago
John Kavanagh and Johnny Walker kicked out of T-Mobile Arena during UFC 279 main card
2 months ago
Conor McGregor took exception to one part of Nate Diaz victory speech
Next Page