"If someone says that they are the baddest badass in the room, I’ll be the first to stand up and beg to differ," - Nate Diaz, UFC 202 Bad Blood.

You've got to hand it to Conor McGregor. With just about every fighter from featherweight to welterweight looking to get a piece of him following his sensational performance at UFC 205, the Notorious knows how to wind up everyone waiting impatiently in that Red Panty Night queue.

In the build-up to his super fight against Eddie Alvarez in New York, McGregor let everyone know how he was going to cap off 2016. Once that main event was over, he'd have a belt across either shoulder as dual champion and then he would drop that big announcement that he had been teasing for weeks.

And that's exactly how it all played out. 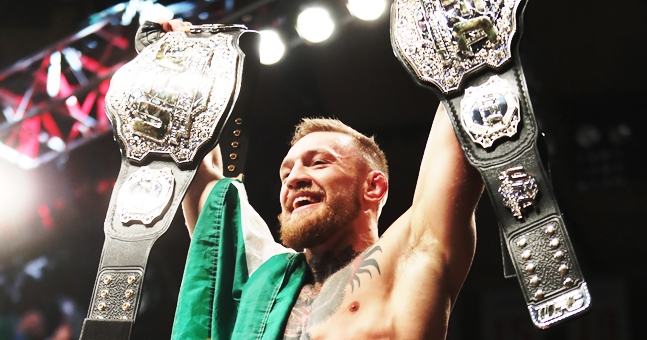 END_OF_DOCUMENT_TOKEN_TO_BE_REPLACED

McGregor's history-making knockout of Eddie Alvarez only made the target on his back grow exponentially, but in the post-fight press conference he dropped the news that he would be taking some time off from fighting as his girlfriend is expecting a baby.

He added that two things will have to happen before he steps back into the Octagon - the UFC's new owners will need to talk business with him and he wants a bigger slice of the company's pie in the form of equity. Until that happens, it looks like all the top 145 and 155 lb contenders will have to slug it out among themselves to decide who deserves the next Red Panty Night.

END_OF_DOCUMENT_TOKEN_TO_BE_REPLACED

He let the entire roster know where they stand with a social media post on Wednesday evening. The timing of the tweet was interesting as it came just a few hours before top lightweight contender Khabib Nurmagomedov revealed the cheeky Twitter DM he sent to the Notorious.

Must have struck a nerve.

Hello id like to order some competition please I don't have any pic.twitter.com/cocgW4uwsb

END_OF_DOCUMENT_TOKEN_TO_BE_REPLACED

If The Eagle took issue with it, you could bet your bottom dollar that the only man to defeat McGregor inside the UFC's Octagon was going to get in on the action too.

One half of Stockton's proudest fighting sons, Nate Diaz, was quick to remind everyone that McGregor hasn't steamrolled every opponent he's ever faced in the world's largest MMA promotion.

Diaz, of course, finished McGregor in UFC 196's headline act forcing the tap with a rear-naked choke in the second round after outlanding McGregor throughout the course of the fight. However, McGregor got his revenge at UFC 202 by defeating Diaz via majority decision. With the series tied at one apiece, it sets things up perfectly for a trilogy fight which we have no doubt Diaz was pushing for with this post.


popular
London Marathon sprinter shares his finishing time
Broadcaster tries to reunite Roy Keane and Alfie Haaland before Manchester derby
Padraig O'Hora gets his hair pulled as fly-goalie gets punished in Mayo championship
Roy Keane fires back after Micah Richards uses 'the new buzzword in football' to question Cristiano Ronaldo
GAA JOE Team of the weekend
The FootballJOE Pub Quiz: Week 56
Jack Grealish couldn't resist Casemiro post after sitting him down in Manchester derby
You may also like
2 weeks ago
Hasbulla signs five year deal with UFC 'worth more than many fighters'
3 weeks ago
Nate Diaz and Tony Ferguson tossed together for UFC 279 main event after wild 24 hours
1 month ago
Your guide to a huge weekend of sport and how to watch it all
2 months ago
Paddy Pimblett leaves O2 Arena in tears after dedicating victory to friend that died by suicide
2 months ago
Conor McGregor 'offered' blockbuster UFC title shot in January
3 months ago
Ian Garry makes American opponent rue pre-fight comments at UFC 276
Next Page