Nate Diaz is ready to call Conor McGregor and the UFC's bluff.

The man who forced the tap from McGregor at UFC 196 gave one hell of an interview in a special edition of the MMA Hour on Wednesday night.

During the chat, the Stockton native gave his take on the rumoured crossover superfight between Conor MCGregor and Floyd Mayweather. Diaz believes that McGregor never wanted to fight him at UFC 200, so soon after their first bout at UFC 196, and now both he and the promotion are using the rumours to buy the Notorious more time to improve his overall game.

"Now they're talking this Mayweather shit and it's all a cover up and they're trying to hide the fact that he got his ass whooped. They want to buy him more time to get better if we are going to fight."

When Diaz met with Dana White in Stockton to discuss his next step, he brought up the McGregor vs Mayweather rumours as leverage to get a better deal for the McGregor rematch, which has yet to be finalised. It didn't work out that time for Diaz, but he hinted the UFC are making strides towards getting that fight done after it was scrapped from UFC 200's main event.

"Every day I'm hearing this Mayweather shit I'm getting phonecalls about whether I'm going to take the fight or not. It seems like this is a pretty big deal so (I asked) could I get compensated for it? They weren't the happiest about that, but they weren't not talking about right now, but we're working on it." 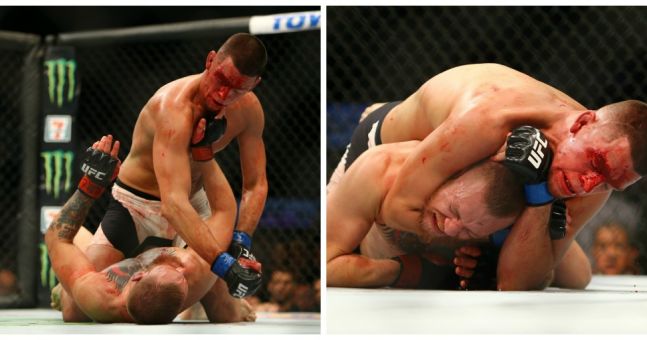 Diaz seemed genuinely amused by the Mayweather rumours, particularly because he feels he outboxed McGregor in their fight in Vegas. He believes that the UFC and McGregor are just perpetuating the rumours to afford the Dubliner more time, and he's ready to call their bluff.

"They're trying to put on a freak show fight with boxing and you just got BOXED UP!.He didn't get tapped out. He got beat up and shot. Mayweather saying he wins most of his fights by stand up and I'm like, 'Not with me, he was losing the stand up part and he took a shot and I was way out.' I just think it's all fake, phony and people should recognise it."

"I call your bluff. Fight Mayweather motherfucker! I'm going to be right here sitting back like, 'Ok!' Mayweather's going to whoop his ass in a boxing match. I'm big into boxing."

Despite thinking that McGregor would get smoked by Mayweather inside a boxing ring, Diaz feels annoyed over the arrogance from the boxing community over the rumours.

"He'd get mounted and laughed at and slapped around and smile at the crowd and wave. There's no chance. Don't fucking give me that shit."

Diaz has sparred with world-class boxers before, most notably undefeated former world champion Andre Ward for four months. He confessed that "growing up in boxing gyms" means he often sides with the boxing community, but not in regard to slamming his sport of MMA.

"I never take the MMA side over boxing, but don't be talking shit. 'He'd get embarrassed.' Yeah, but we're talking real fighting now you one-dimensional boxing fucks. This is real life shit. You'll get embarrassed."


popular
"I never really cried or got emotional over what I've done as an individual. I couldn't give a s***"
"If I break my wrist, it's on f***ing both of you." - Koepka and Berger act the spoiled child
"I was off the grid" - Aidan O'Shea respond's to Mayo criticism after club championship win
The FootballJOE Pub Quiz: Week 7
'I won The Open by six shots in my home country, but this was the best week of my golfing career'
Garry Ringrose raves about four young Leinster stars to watch this season
Galway fans' frosty reception for Davy Fitz doesn't make any sense
You may also like
2 months ago
UFC appears to have signed a new Irish fighter
2 months ago
Conor McGregor labelled an 'easy payday' who can't compete with top UFC fighters anymore
2 months ago
Khabib says McGregor is "finished" as Dos Anjos makes his play
2 months ago
Shocking post-fight footage shows McGregor threat that upset Poirier so much
2 months ago
Conor McGregor posts first Instagram since last night's defeat
2 months ago
"I'm nice, now I'm mean, I started nice, now I'm back to mean" - Dominick Cruz slams McGregor's changing personas
Next Page