'Conor was the first one that asked me how I was... He has heart' - Max Holloway

If these two men face off again, it may be when both have a few more miles on the clock.

It feels like a lifetime ago since Max Holloway and Conor McGregor faced off in The Octagon.

Back in August 2013, in Boston, McGregor was a unanimous decision winner over Holloway in a fight that saw both men battle through injuries to go the distance. McGregor's star was on the rise and he would claim interim gold at 145lbs within two years, and become undisputed champion in December 2015. 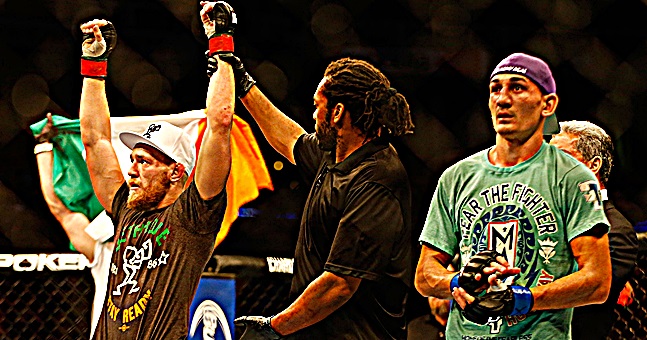 END_OF_DOCUMENT_TOKEN_TO_BE_REPLACED

That loss saw Holloway, aged 21 at the time, slip to 7-3 in Mixed Martial Arts but he went on to win his next 13 bouts and become UFC featherweight champion. Earlier this year, after health issues cost him the UFC 223 headliner against Khabib Nurmagomedov, Holloway lost for the first time in almost six years when Dustin Poirier took a decision to claim the interim lightweight belt.

Holloway dropped down to featherweight, three months later, and defended his crown against Frankie Edgar. On December 15, he defends his title against Alexander Volkanovski (20-1) at UFC 245 in Las Vegas.

END_OF_DOCUMENT_TOKEN_TO_BE_REPLACED

Ahead of that fight, Holloway spoke with MMA Fighting about his relationship with McGregor, who is now stepping up to welterweight to take on Donald Cerrone. The Hawaiian says all the sparring between himself and McGregor, over the years, has been "business" and never personal.

He spoke highly of how the Dubliner was quick to reach out with messages of support when, in 2018, health issues saw Holloway miss out on fights with Nurmgomedov and then Brian Ortega. Holloway commented:

"Conor was the first one that asked me [how I was], that tweeted how everybody was saying this stuff but nobody was asking about how I was when the whole [Khabib] thing happened.

"When the July thing happened [with Ortega] and then even walking out to the Frankie Edgar fight, he showed me support. He has a heart."

My thoughts and my respect are with 145lb World Champion Max ‘Blessed’ Holloway.

Max looks as fresh as he has ever looked at 145lbs here before this bout begins.
I’m excited for this one guys!
Both men look fresh.
Let’s get ready to rumble!!!

Holloway did go for health screenings in 2018 and early 2019 and heart issues have been ruled out. He has been cleared to fight, with little fuss, twice this year.

Having gone the distance against each other, and never took the trash-talking far, McGregor and Holloway do seem to have a bond forged in combat. Holloway is keen to step up to lightweight again but McGregor may well be tied up with welterweight bouts [Cerrone then Jorge Masvidal] in 2020.

Meanwhile, No.1 lightweight contender Tony Ferguson has signed his bout agreement for an April 18 tilt with champion Khabib Nurmagomedov.

This will be the fifth time the UFC has tried to pair both men off against each other and fight fans will be hoping injuries and weight cut issues do not again intervene.