Paul said he is confident he could persuade Pimblett to take the fight.

Logan Paul has admitted he would be open to facing Paddy Pimblett as he eyes up a potential fight in the UFC.

The YouTube star has previously revealed he would like to try a range of combat sports. In addition to his bouts in the boxing ring, Paul recently appeared at WWE's Wrestlemania 38 event, where he teamed up with The Miz to defeat Rey Mysterio and his son, Dominik.

'They say he is the next Conor McGregor.'

END_OF_DOCUMENT_TOKEN_TO_BE_REPLACED

During an interview with the MMA Hour, the American stated that he would now like to try his hand in the octagon and eyed up 'Paddy the Baddy' as an opponent he would like to face.

"I have found out who I would like to fight if I did a UFC match: Paddy the Baddy (Pimblett)," he said.

"They say he is the next Conor McGregor right, he is super charismatic and entertaining as hell. He is on the come-up and young like me and has a real loudmouth. I like the way he can perform." 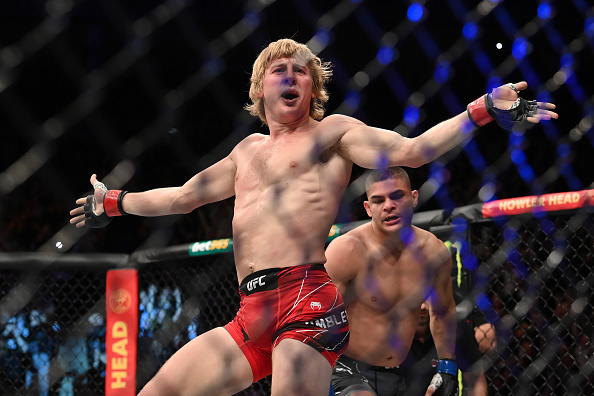 Paul then added he may even consider asking him onto his podcast, Impaulsive, where he would ask the Liverpudlian if he would be open to a fight.

END_OF_DOCUMENT_TOKEN_TO_BE_REPLACED

"I think I might have him on my podcast and say to him straight up 'I would like to fight you in the UFC'," the 27-year-old added.

"He could get up to 185lbs and I could get down to 185lbs for a UFC match. It's the only thing I don't know if I would win, he is a good a** fighter and I have never had an MMA fight. If I am doing it obviously I think I am going to win.

"But now I am looking at it and if I do a UFC fight then I have to do it with someone else who can sell tickets. He is still relatively new and he is young and entertaining so I think the fans will eat that s*** up. There is too much going on at the moment but yeah."

Paul believes it is unlikely he will ever fight McGregor.

On previous occasions, Paul has called out the likes of Conor McGregor to a fight in the octagon. However, he feels that the ship has sailed for any hopes of a fight between him and the Irishman - despite believing he would beat him.

"I don't think McGregor wants to fight me," he told Bild.

"If I had had two more rounds I would have knocked him out, I know that! Conor would beat me in MMA, but I would definitely beat him in boxing."