They sensed the end was near.

Conor McGregor went to the championship rounds against Khabib Nurmagomedov but he did not go the distance. His corner did a fine job at keeping the Dagestani focused when he was not even sure what round he was heading into.

Nurmagomedov put in a dominant display against the former UFC lightweight champion and would have been leading by three or four points (39-35 or 39-36, depending on the judge) going into the final round before he snapped in the neck crank and forced a tap.

END_OF_DOCUMENT_TOKEN_TO_BE_REPLACED

McGregor did well to last the guts of four rounds with the Dagestani but it all kicked off before that fourth and final round.

McGregor's hooking of Nurmagomedov's gloves - tying him up so he could not bring about a take-down - clearly got under the champion's skin. He was distracted by McGregor's tactics and was fired up mid-round and, as we all saw, after the fight.

UFC commentator Joe Rogan spoke about the Dubliner's glove-hooking after the fight. He told UFC on FOX:

"Khabib was angry because Conor was grabbing Khabib's gloves. He was hooking against his gloves and he was doing it illegally.

"Khabib said it to Herb Dean, he said that Conor did it three times. That's what it was all about. That's why he was fired up." 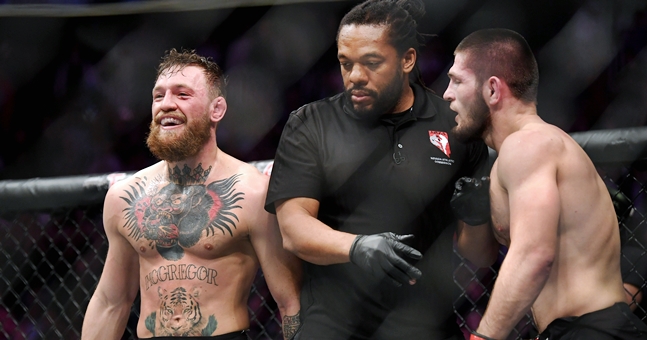 The pay-per-view broadcast picked up the instructions from Nurmagomedov's corner between the third and fourth rounds.

Javier Mendez, his trainer, had an interesting conversation and it was clear Nurmagomedov was a bit confused.

NURMAGOMEDOV: "This is the fourth round?"

MENDEZ: "This is the fourth round. Just drink some water."

NURMAGOMEDOV: (To referee Herb Dean) "Three times he do it [hook the gloves]. Three times... You say to him 'Two times. One more time you lose a point' and he still [does it]."

MENDEZ: "Concentrate on the fight."

END_OF_DOCUMENT_TOKEN_TO_BE_REPLACED

The advice from Mendez must have permeated as Nurmagomedov followed it to a tee in the fourth round. He traded in the stand-up with McGregor but waited for an opening and took him down.

Once he had a wilting McGregor on the mat, he drove home the advantage and cranked the neck.

There were some doubts about Nurmagomedov's true pedigree against, in McGregor's words, running with the big dogs. After UFC 229 - despite the controversial scenes after the fight - those doubts have been well and truly erased.


popular
"I went up to the Italians and gave them a big auld shoulder" - Paul O'Donovan does it again
Man United have 'decided to sell' promising midfielder James Garner
Jamie Carragher on the two Man United players Erik ten Hag can't trust
Wexford Under-20 lights it up as Ferns win their first ever county title
Wexford, Waterford and Kilkenny down some good men as Australia calls
Graeme Souness under fire for calling football a ‘man’s game' while sat with Karen Carney
Luke Chadwick recalls furious Alex Ferguson reaction when he rejected loan move
You may also like
1 month ago
Jorge Masvidal speaks about defending BMF title against Conor McGregor
2 months ago
Dana White reveals who Conor McGregor could fight on UFC return
2 months ago
Your guide to a great weekend of sport and how to stream it all
2 months ago
Conor McGregor says he knows his next UFC opponent and fight date
3 months ago
Commentating cage-side, Daniel Cormier missed the UFC knock-out of the year
3 months ago
Conor McGregor responds to Michael Chandler's callout after UFC 274
Next Page