Disappointed? Yes. Shocked? Far from it.

That was the response from the vast majority of the MMA community when reports emerged last night that UFC featherweight champion Jose Aldo suffered a broken rib while sparring 18 days before his title defence against Conor McGregor.

The fight is, at the time of writing, still officially on but the likelihood of an athlete being cleared to fight with an injury as serious as that is slim to none. 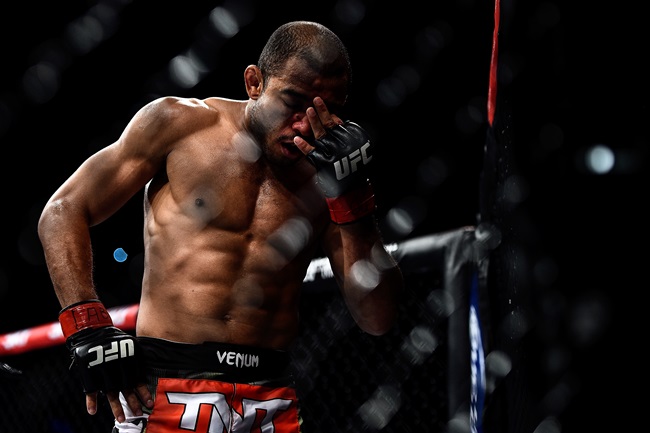 END_OF_DOCUMENT_TOKEN_TO_BE_REPLACED

That means that Aldo will have had to withdraw from a title fight for the fifth time in his UFC career which is crazy when you think of the amount of money that the promotion are pumping into his championship bouts.

Here's a brief history of Aldo's history with injuries forcing him out of fights.

UFC 125 - Aldo had just been named the first UFC featherweight champion after the organisation adopted the 145lb weight division but his first defence against Josh Grispi quickly became a non-event when the Brazilian withdrew from the card, citing an injury.

END_OF_DOCUMENT_TOKEN_TO_BE_REPLACED

UFC 149 - Another undisclosed injury put the kibosh on Aldo's planned bout with Erik Koch in July 2012 which led to teammate Renan Barao's interim bantamweight fight with Urijah Faber being moved to the main event. .

UFC 153 - Erik Koch would have been cursing Aldo's training partners when the rescheduled title fight was also scrapped after the Nova Uniao fighter damaged his foot in training.

UFC 176 - This event was just the second time that the UFC had to cancel an entire pay-per-view when Jose Aldo fell out of his scheduled fight with Chad Mendes after a shoulder injury late on in training meant that he couldn't compete. 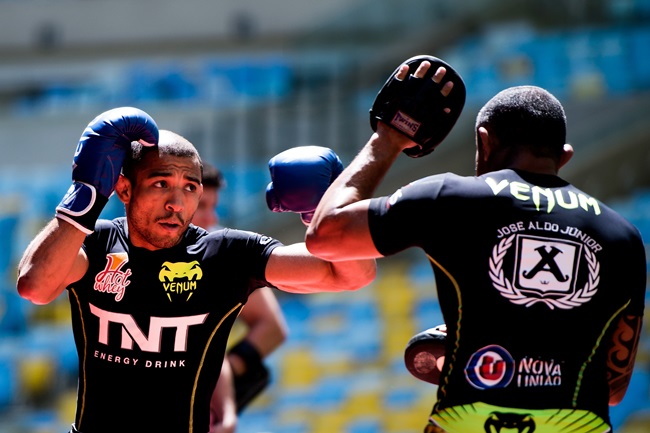 END_OF_DOCUMENT_TOKEN_TO_BE_REPLACED

Either this would suggest that Jose Aldo is the most unlucky champion on the planet (after former heavyweight champion Cain Velasquez, of course) or else he is sparring far too hard and way too close to his title defences.

Some camps have a state of trust instilled where, even if fighters do want to spar three weeks out from a fight, that their training partners know to take the intensity down to an acceptable level.

But other gyms still adhere to the old school philosophy of "go hard or go home" and, just judging by the amount of times that Aldo has frustrated UFC officials by pulling out of big fights, Nova Uniao sounds like it could be one of those gyms.

Most camps spend the last three weeks focusing more on technique, gameplanning and very light sparring because even a bad cut can be dangerous.

Former UFC lightweight Jamie Varner has recently advised young fighters about the dangers of sparring and claims that his career had been cut short by sparring too hard and too often due to the "prove your toughness" of MMA training rooms.

Maybe Jose Aldo should take that advice on board if he is to stay on the UFC's good side, keep his fans happy and ensure a longer career for himself.


popular
Talksport presenter puts Martin O'Neill to the pin of his collar over Declan Rice and Jack Grealish
Gary Neville sticks up for Ronaldo as contextless pictures and videos taken as gospel
Ariel Helwani shares Paddy Pimblett WhatsApp messages as spat becomes public
Rory McIlroy explains 'falling out' with Shane Lowry that lasted a few years
World Cup Power Rankings: The top eight pundits of the tournament so far
World Cup Power Rankings: The top 10 players at the tournament ahead of the quarter-finals
Roy Keane scores winning goal past Micah Richards in ITV v BBC pundits match
You may also like
1 month ago
Conor McGregor almost unrecognisable after shaving off iconic beard
1 month ago
Dana White confirms Conor McGregor is not in the USADA testing pool
2 months ago
Hasbulla signs five year deal with UFC 'worth more than many fighters'
2 months ago
UFC fighter Elias Theodorou has died, aged just 34
2 months ago
John Kavanagh and Johnny Walker kicked out of T-Mobile Arena during UFC 279 main card
2 months ago
Conor McGregor took exception to one part of Nate Diaz victory speech
Next Page