John Kavanagh not happy with UFC for changing travel arrangements

International fight week is finally upon us and John Kavanagh has two fighters competing.

Undefeated Irishman Richie Smullen will make his first trip to the UFC's Octagon in the wee hours of Saturday morning. The undefeated Arklow native came through the most recent season of the Ultimate Fighter. Unfortunately for Smullen, his run on the show ended under bizarre circumstances. He was forced to withdraw from the competition minutes before his first fight. He was all set to take on Allan Zuniga until his calves started cramping up during his warm-up. Try as he might, he simply wasn't able to continue. However, he was given a second chance at the big time when he was matched up against Luis Pena at the TUF 27 finale.

Kavanagh will also be in the corner of TUF finalist Brad Katona. After wrapping up the taping of the show, the undefeated Canadian headed to SBG Ireland to train. He secured his place in the final of the featherweight bracket against an opponent that is yet to be determined.

Unfortunately, fight week hasn't got off to the best of starts for Kavanagh. He took to Twitter after touching down in the City of Sin to publically air a grievance with the promotion. He's upset with the UFC for failing to spring for a taxi to bring him from the airport to the fighters' hotel. He also let it be known that he had to pay for his own travel and accommodation as the promotion only cover these expenses for one member of a fighter's corner.

Kavanagh has since deleted the tweet. But you can see a screenshot of it below. 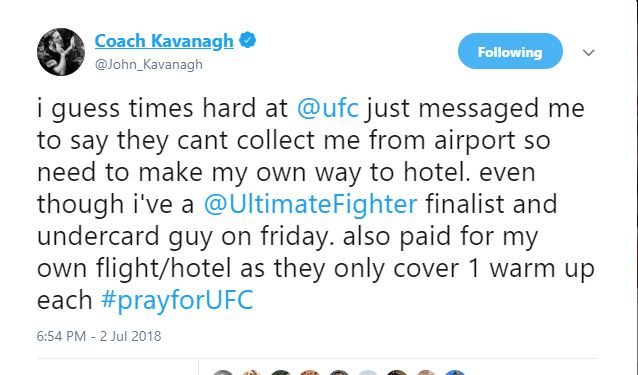 
popular
Baz & Andrew's House Of Rugby - Twickenham carnage
Jacob Stockdale and Johnny Sexton not spared by English press
'Were they up for it more than us? That's my responsibility' - Andy Farrell
Triple Crown wrenched away as England scrape Ireland off their boots
ROG hits the nail on the head assessing Ireland's performance
The Ireland XV that should definitely start against Italy
QUIZ: How well can you remember this season's Premier League results so far?
You may also like
1 week ago
Conor McGregor's next fight narrowed down to two options
1 week ago
Ben Askren on getting the opportunity of a life-time... after he retired
2 weeks ago
Dominick Reyes handles controversial Jon Jones defeat with remarkable grace
4 weeks ago
Conor McGregor demands apology from ESPN pundit over Cerrone comments
1 month ago
"I saw a guy that looked like he didn't want to be there for some reason"
1 month ago
"Conor's definitely going to be competing before the summer" - John Kavanagh
Next Page