Joe Rogan reveals he could be parting ways with the UFC

Joe Rogan dropped one hell of a bombshell on a recent episode of his podcast.

The UFC colour commentator explained to his guest, flyweight champion Demetrious Johnson that he is considering calling time on his career with the UFC.

Mighty Mouse asked the stand-up comedian how long he thinks he will be doing commentary for the world's largest MMA promotion and Rogan gave a somewhat surprising response.

"I don't know. My contract's up in August. I might leave in August." 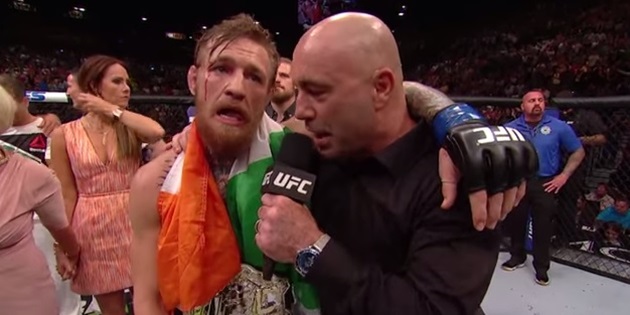 Rogan revealed that he dislikes repetition and considering he has been working with the promotion for the guts of two decades, he feels 2016 might be the right time to walk away from the gig.

"I like doing shit that scares me. I like taking chances. I like walking away from things. I like doing that. I like experience new things, I think it opens new doors, your mind starts firing a new way. I'm not a big fan of doing the same shit over and over and over again."

"You got to experience different things in life and I like to plan those things out. I've been doing the UFC for a long time. I will never stop being a UFC fan though, that's not going to happen. I love the sport, but there's probably going to be a time where I don't do commentary anymore, and it might be sooner than later."

However, Rogan did give a glimmer of hope. He confessed that he may change his mind come August and decide that he wants to renew his contract.

Check out Rogan discussing potential leaving the company in the video embedded below from around the 1:39:30 mark.

popular
Conor McGregor bought out of Proper 12 whiskey company
"No one comes into racing for money – it is a hard way to make a living" - Elliott releases heartfelt statement
Longford leaving cert schools Europe's finest with measured masterclass
Ugo Monye's Lions XV features two Ireland players and Welsh captain
QUIZ: How well do you remember the 2010 World Cup?
"There's 30 pints of Guinness on the table! The night before a World Cup quarter final"
Mike Haley magic and Bundee's blunder sees Munster reach PRO14 Final
You may also like
2 weeks ago
Dana White has settled on a contentious next fight for Conor McGregor
1 month ago
"This man ain't ready for Nurmagomedov. He ain't ready!'"
1 month ago
Conor McGregor wants immediate Dustin Poirier rematch, for UFC title
1 month ago
Daniel Cormier defends immediate reaction to shock Conor McGregor loss
1 month ago
McGregor admits shout from Dustin Poirier's corner got inside his head
1 month ago
Khabib Nurmagomedov perfectly predicted how Poirier would defeat McGregor
Next Page