Fatigue over time in any athletic endeavour is expected. However, for an athlete like Conor McGregor, 'gassing out' can have dire consequences.

'The Notorious' has traditionally based his game around having an early night's work. He goes for the kill from the get-go with every move a calculated step towards a highlight-reel knockout. But when that finish doesn't come, the engine can start to cause trouble and even fail.

This is what McGregor was alluding to when he referenced being inefficient with his energy after losing to Nate Diaz at UFC 196. The same drop-off occurred in the rematch at UFC 202. However, on that occasion, the Dubliner was able to come back strong in the fourth and survive the fifth to earn a majority decision victory.

Firas Zahabi is no stranger to elite prizefighting. The head coach of former two-weight UFC champion Georges St-Pierre has a theory regarding McGregor's perceived cardio issues which he shared on the Joe Rogan MMA Show. He feels that McGregor's greatest weapon may actually be linked with arguably his greatest weakness.

"Number one on the list, number one, is where your muscle is attached to your bone. It’s genetic. So, (Mike) Tyson, he has a powerful left hook not because his coach taught him how to hit a left hook. He could have hit a left hook like that if he had a mediocre trainer."

"It has to do with the leverage of his bones."

"So, for instance, imagine a really heavy pole that weighs a hundred pounds, and I want to stand it up. Well, depending on where I grab it, I’m gonna have more resistance or less resistance. If I grab it near the end, I have more leverage. So where your muscles are attached to the bone is gonna dictate how much leverage you get out of it.” 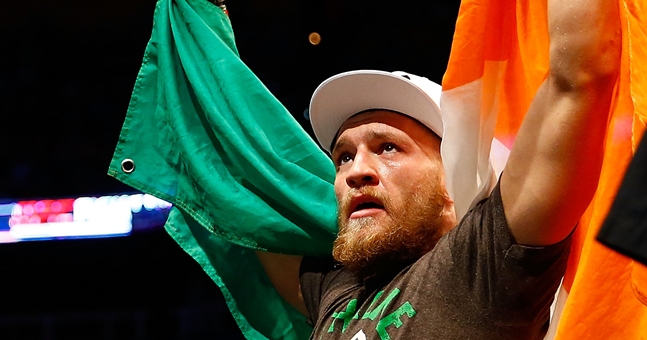 After McGregor's skeletal structure was addressed, Zahabi moved onto his muscle fibres. McGregor being a fast-twitch muscle fighter, in Zahabi's opinion, means he depletes his energy levels quicker.

For evidence to support his fast-twitch muscle theory, Zahabi pointed towards 'the Money Fight.' Following the blockbuster boxing bout, Floyd Mayweather admitted his game plan was letting McGregor punch himself out.

“McGregor, look at his stats. It’s all round one knockout, round two knockout.

"He's fast-twitch, high-leverage left hand. If you take him into deep waters, his fast-twitch muscle fibres cannot metabolise (Look at what happened) with Mayweather. Mayweather’s so smart, he let McGregor work for three rounds. '’I knew you’re getting excited. Keep working. Keep working. And when you have nothing left, I’m gonna put you out.’ That was such a brilliant strategy.”