The UFC 229 co-main event was quite possibly the most intriguing fight on the card as Tony Ferguson and Anthony Pettis faced off in a fight that could well decide who fights for the UFC lightweight title next.

Former champion Pettis has been going through somewhat of a revival after three successive defeats following his title loss.

Ferguson on the other hand was interim-champion until a freak accident forced him out of a main event fight with Khabib Nurmagomedov at UFC 223 back in April.

Astonishingly, El Cucuy's return to the Octagon comes only six months after knee surgery that was supposed to sideline him for up to a year.

With both men eyeing up another crack at UFC gold, this fight was bound to throw up something crazy.

Pettis, a kicking specialist, came out of the blocks firing immediately targeting Ferguson's knee, a move that seemed to hurt him early on. 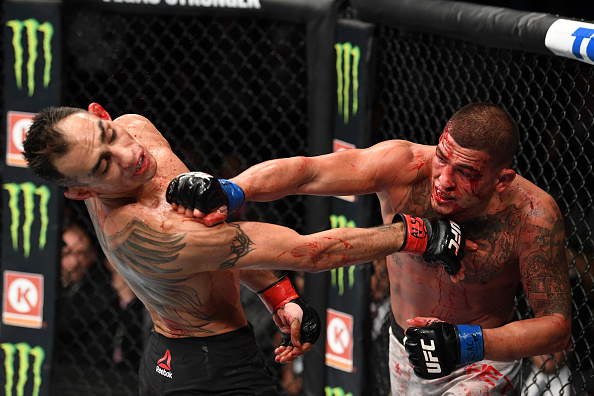 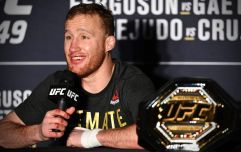 "I'll go to Ireland; do what I gotta do" - Gaethje has plans for McGregor after title fight

END_OF_DOCUMENT_TOKEN_TO_BE_REPLACED

Ferguson seemed hurt, but as round one continued it was clear he had shrugged it off. An entertaining opening round came to an end as both fighters showed off their unique skill sets.

The second round started in explosive fashion as Pettis hurt Ferguson straight off the bat. It looked like the fight could have been over but Ferguson weathered the storm.

The crowd rose to their fight as the two unorthodox scrappers put on a fight for the ages. 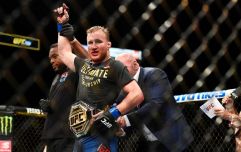 END_OF_DOCUMENT_TOKEN_TO_BE_REPLACED

Round two will go down as the round of the year, indeed the fight will be go down as one of the best fights of 2018.

However, it came to an anti-climatic end as Pettis' long-time coach Duke Roufus pulled him from the fight after breaking his hand, declaring Ferguson the victor.

Ferguson brought to tears after earning the win. What a moment. #UFC229 pic.twitter.com/b9zSbtyQih

After the fight, Ferguson called out Conor McGregor in a foul mouthed rant. Grabbing the microphone of Joe Rogan, El Cucuy screamed;

"Where you at, McNuggets, you f*cking piece of sh*t?

"I'm gonna kick you ass, If khabib don't do it I will

"Son of a bitch, Ill give you a proper ass-whooping anyway"

A clear statement of intent from Tony Ferguson who will be watching the main event closely knowing he is probably the next in line to challenge the winner.


popular
Roy Keane cracks up Carragher and Hasselbaink with league title joke
"I've had stick my whole career" - Mike McCarthy on 'Plastic Paddy' jibes and singing the anthem
'Go and get a job' - Ronnie O'Sullivan responds to Shaun Murphy's amateur player comments
Brian McGrath's powerful interview after county final win is club GAA at its finest
Jamie Carragher and Roy Keane clash over Cristiano Ronaldo's role at Man Utd
"People tend to forget I've managed before and I've done okay in the Premier League" - Keane on the defensive
Pundits criticised by scientists for linking player collapses to vaccines
You may also like
1 year ago
UFC 249 going ahead 'with or without' Khabib Nurmagomedov
1 year ago
Fifth time unlucky for Nurmagomedov vs. Ferguson
1 year ago
Khabib shows Tony Ferguson what he thinks of his belt
1 year ago
"This guy's got an issue and his name is Tony Ferguson... it's hunting season"
2 years ago
Nurmagomedov vs. Ferguson title fight set for same venue as McGregor bus attack
2 years ago
Khabib Nurmagomedov set for Tony Ferguson title fight in New York
Next Page