Daniel Cormier was probably not the only poor blighter to have blinked and missed what may well be the UFC knockout of the decade.

Michael Chandler has guaranteed himself a couple of huge fights in the next 12 months after his sensational knock-out victory over Tony Ferguson at UFC 274.

END_OF_DOCUMENT_TOKEN_TO_BE_REPLACED

Chandler beat fellow lightweight Ferguson with a devastating front kick, early in the second round of their main card fight in Phoenix, Arizona.

Following the fight, Chandler called for a rematch with both Charles Oliveira and Justin Gaethje, as well as requesting a crack off Conor McGregor, even at welterweight [170lbs]. 'The Notorious' has since expressed an interest in such a tilt.

"We don’t even train that, that much," Chandler told Joe Rogan, after the fight. "It just happened. He's so long, but he does kind of keep his arms down at the side, so there was a lane right up the middle."

The first round had seen Ferguson drop Chandler with a punch that landed flush. 'El Cucuy' was tagging Chandler with regularity, so the former Bellator champion took the fight to the mat.

Fans were expecting a second round of similar qualities but, 15 seconds in, Chandler's crunching kick ended the contest. It took many by surprise, including UFC co-commentator Daniel Cormier. 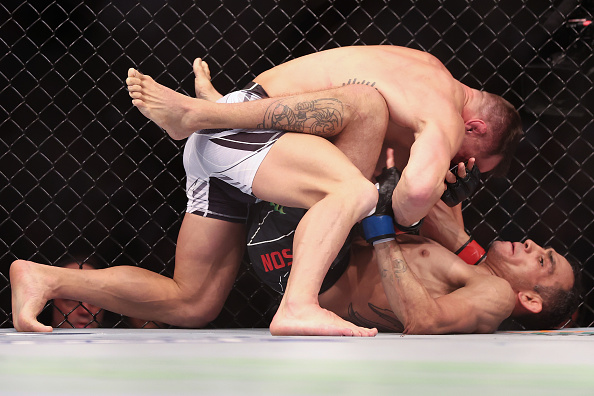 'Nobody has stopped Tony Ferguson!'

The former UFC light heavyweight and heavyweight champion was turning to share a remark with Rogan, sitting beside him at cage-side, when Chandler connected with the kick. As replays played in the arena, Cormier conceded:

"Nobody has stopped Tony Ferguson... He was by Justin Gaethje, but that was after five rounds. Like that I look at you, I look back, he's on the ground!"

Ferguson went straight to the hospital, after the bout, and had a CT scan on his brain but was later released after a short stay. It remains to be seen if the 38-year-old will venture back to The Octagon after that thunderous knockout loss.