Nate Diaz and Tony Ferguson have circled each other for well over a decade. A bizarre twist of fate now sees Ferguson fighting for his UFC future against a man who insists he is done with the promotion after this, his final fight on a long-running contract.

Thursday night in Las Vegas was supposed to see a press conference that would tee up UFC 279, on Saturday night [Sunday morning GMT], but a massive backstage brawl saw Dana White make the decision to pull the plug. "First time we've ever had to do this, guys," announced the UFC president. "I'm sorry."

END_OF_DOCUMENT_TOKEN_TO_BE_REPLACED

Little did White know, the real drama was only beginning.

UFC 279 was set to be headlined by Diaz fighting Khamzat Chimaev in his final contracted bout with the UFC. The Stockton native, who famously split a two-fight feud with Conor McGregor in 2016, wants out after 15 years with the promotion and insisted he will go his own way, no matter what happened in the main event.

The press conference brawl added some extra spice to that main event bout, only for a morning of weight cut dramas to unfold and bring massive changes to the main card. 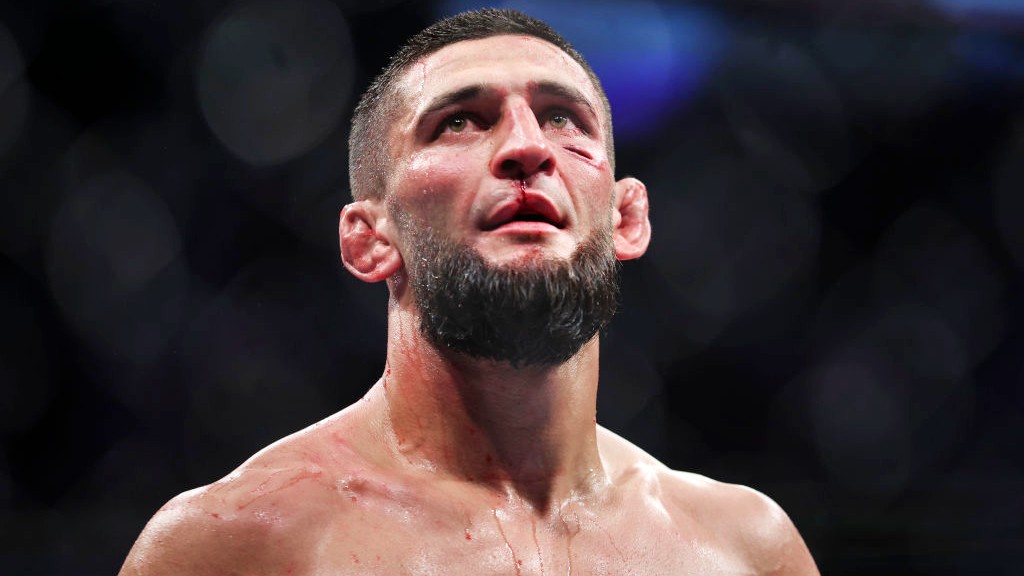 Khamzat Chimaev looks on after his welterweight fight against Gilbert Burns during UFC 273. (Photo by James Gilbert/Getty Images)
Advertisement

END_OF_DOCUMENT_TOKEN_TO_BE_REPLACED

The major disruption to the UFC 279 main card was caused by Khamzat Chimaev suffering health issues when going through his final weight cut.

The Swedish welterweight ended up tipping the scales at 178.5lbs, over seven pounds over the cut-off, after being told by a medic to halt his attempts to cut any more weight. Dana White told ESPN:

"If you saw him yesterday, he was very lean already and he should have come in on weight. He started to cut weight and he started locking up and cramping and all the things that are from a bad cut. Unlike 10 years ago, we send in a doctor and they determine whether he will keep cutting weight and the doctor told him he shouldn't."

The decision was then taken to move Chimaev to a catch-weight bout [180lbs] with Kevin Holland, meaning both Nate Diaz and Tony Ferguson needed a new opponent. Fortunately for the UFC veterans, they had each other to fall back on.

While Diaz is a 15-year veteran with the promotion, Ferguson is in his 12th year with the UFC. Both men are former Ultimate Fighter winners and Ferguson also held the UFC interim lightweight in 2017, only to have it stripped from him after he was injured.

Diaz told ESPN that 'everything just flipped, quick-style, but whatever' and said he felt Chimaev was not facing him in The Octagon because he is "scared".

"It's all frustrating," said Diaz. "I trained to fight Khamzat. I don't know how to fight this guy [Ferguson]. I'm going to go home tonight and watch some video. It don't matter anyway... I'm ready for war."

Nate Diaz says he is 'at least fighting with someone who went through it' rather than a 'fake ass minor leaguer', in Khamzat Chimaev.

Diaz claims he is already 1-0 after getting the upper hand on Chimaev in the back-stage brawl, which also included Kevin Holland and some of his team.

Many fight fans feel the new-look main card is an improvement on the original slate. Veteran MMA broadcaster Ariel Helwani stated that the rejigged main event was 'poetic justice' for Diaz and Ferguson.

Diaz has lost three of his last four fights while Ferguson is 0-4 in his last four. One gets the feeling that whoever loses in the main event may well lay down the gloves and seek challenges elsewhere.

Carl Froch tells us what he really thinks of MMA…