The last UFC event Dillon Danis and Conor McGregor were at ended in sheer chaos.

We are just over a week away from Conor McGregor's first UFC fight in 15 months and the anticipation is building. As he has done for the past few years, Dillon Danis is helping McGregor to prepare for a big fight and doing his best, on his side, to add to the hype.

The Bellator star and McGregor, along with UFC lightweight champion Khabib Nurmagomedov, missed a chunk of 2018 and 2019 after they were suspended for the post-UFC 229 brawl at the T-Mobile Arena in Las Vegas.

END_OF_DOCUMENT_TOKEN_TO_BE_REPLACED

While McGregor may have instigated flashpoints - stealing Jose Aldo's belt, flinging a can at Nate Diaz, attacking a bus carrying fighters at UFC 223 - before his title defeat to Nurmagomedov, both he and Danis were on the receiving end in October 2018. Nurmagomedov submitted McGregor before leaping from The Octagon to trade blows with Danis at the same time as several from his entourage stormed in to attack McGregor. 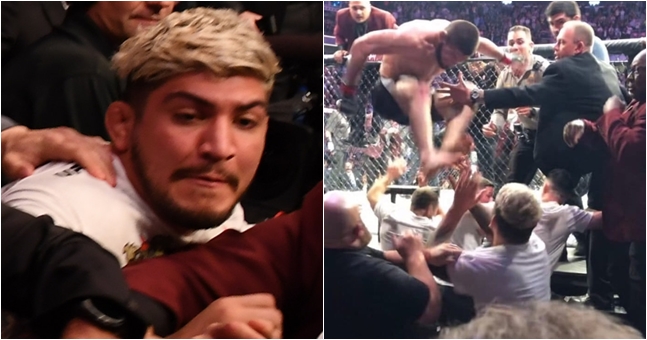 While there remains unfinished business between McGregor, Nurmagomedov and Danis, the immediate focus is on the Dubliner's January 18 bout with Donald Cerrone. Danis says he can see the fight going one of two ways, but he does not see it going beyond the second round.

"It'll either go quick or Conor will just masterfully pick him apart and dismantle him," Dillon Danis told Helen Yee. "So either a quick finish or two rounds in which Conor picks him apart and puts him away.

"Not all masterpieces are made in seconds. The way it's going right now, Conor looks amazing. He's in great shape and has such a great mind-space. I'm really excited to see it and it's going to be a show for everybody."

END_OF_DOCUMENT_TOKEN_TO_BE_REPLACED

Should McGregor successfully get past Cerrone, the big question will be will 'The Notorious' remain at welterweight or will he opt to drop back down to seek a rematch with Nurmagomedov.

"That fight is happen," declares Danis. "It doesn't matter where or when, but it's happening. It doesn't matter if it's in the cage or not, but I can't wait for the day that they fight again because I know the outcome. I believe in Conor, 100%."

The New Yorker is looking forward to Nurmagomedov's April title defence against Tony Ferguson, at UFC 249 in Brooklyn. He notes that Ferguson has good takedown defence and vast wrestling experience and says the winner of that bout would be a toss up.

As for his own MMA career, Dillon Danis is back fighting on January 25 against Keegan Greenwich at 'contractweight' [175lbs]. That Bellator card will also feature Sergio Pettis, Darion Caldwell and is being headlined by Julia Budd's featherweight title fight against former UFC champion Kris Cyborg.

Read more: Dillon Danis reveals advice given to him by Conor McGregor


popular
Talksport presenter puts Martin O'Neill to the pin of his collar over Declan Rice and Jack Grealish
Gary Neville sticks up for Ronaldo as contextless pictures and videos taken as gospel
Ariel Helwani shares Paddy Pimblett WhatsApp messages as spat becomes public
World Cup Power Rankings: The top eight pundits of the tournament so far
Ballyhale's Colin Fennelly felt Ballygunner's victory speech was disrespectful
World Cup Power Rankings: The top 10 players at the tournament ahead of the quarter-finals
Rory McIlroy explains 'falling out' with Shane Lowry that lasted a few years
You may also like
1 month ago
Conor McGregor almost unrecognisable after shaving off iconic beard
1 month ago
Dana White confirms Conor McGregor is not in the USADA testing pool
2 months ago
Hasbulla signs five year deal with UFC 'worth more than many fighters'
2 months ago
UFC fighter Elias Theodorou has died, aged just 34
2 months ago
John Kavanagh and Johnny Walker kicked out of T-Mobile Arena during UFC 279 main card
2 months ago
Conor McGregor took exception to one part of Nate Diaz victory speech
Next Page