Dana White and the UFC should stop the madness now

Time to play your part.

While many of the UK's leading sportswriters headed off to watch Non-League football in order to file copy for the Sunday papers, the UFC was staging a professional contest in Brazil and Dana White was loving the engagement.

At a time when every other major sport in America was grinding to a halt, the Ultimate Fighting Championship took advantage of being slated for a fight night event in Brazil and ploughed on. This event was carried out behind closed doors but there were still well over 100 people inside the Ginásio Nilson Nelson for UFC Brasilia.

END_OF_DOCUMENT_TOKEN_TO_BE_REPLACED

Gilbert Burns defeated Demian Maia, Renato Moicano got one over Damir Hadzovic while Charles Oliveira forced Kevin Lee to tap out in the main event. It was a good, solid night's fighting but should it have even taken place? Truth is, we may only know in time if anyone present contracted Covid-19 (Coronavirus) from being present.

Even if, and hopefully, no-one did, there was a poor message sent out. As medical experts and governments the world over a stressing the need for social distancing during this harmful and deadly pandemic, leading sports organisations need to set an example.

On Friday, a day out from UFC Brasilia, Dana White said he was in contact with the very highest office in the United States about the upcoming event, and more that were scheduled for March 21 and 28, and April 11 and 18. The UFC president  told ESPN:

"I talked to the president and the vice president of the United States today about this. They’re taking this very serious. They’re saying ‘Be cautious, be careful, but live your life and stop panicking.’

"Everybody is panicking, and instead of panicking, we’re actually getting out there and working with doctors and health officials and the government to figure out how we keep the sport safe and how we can continue to put on events." 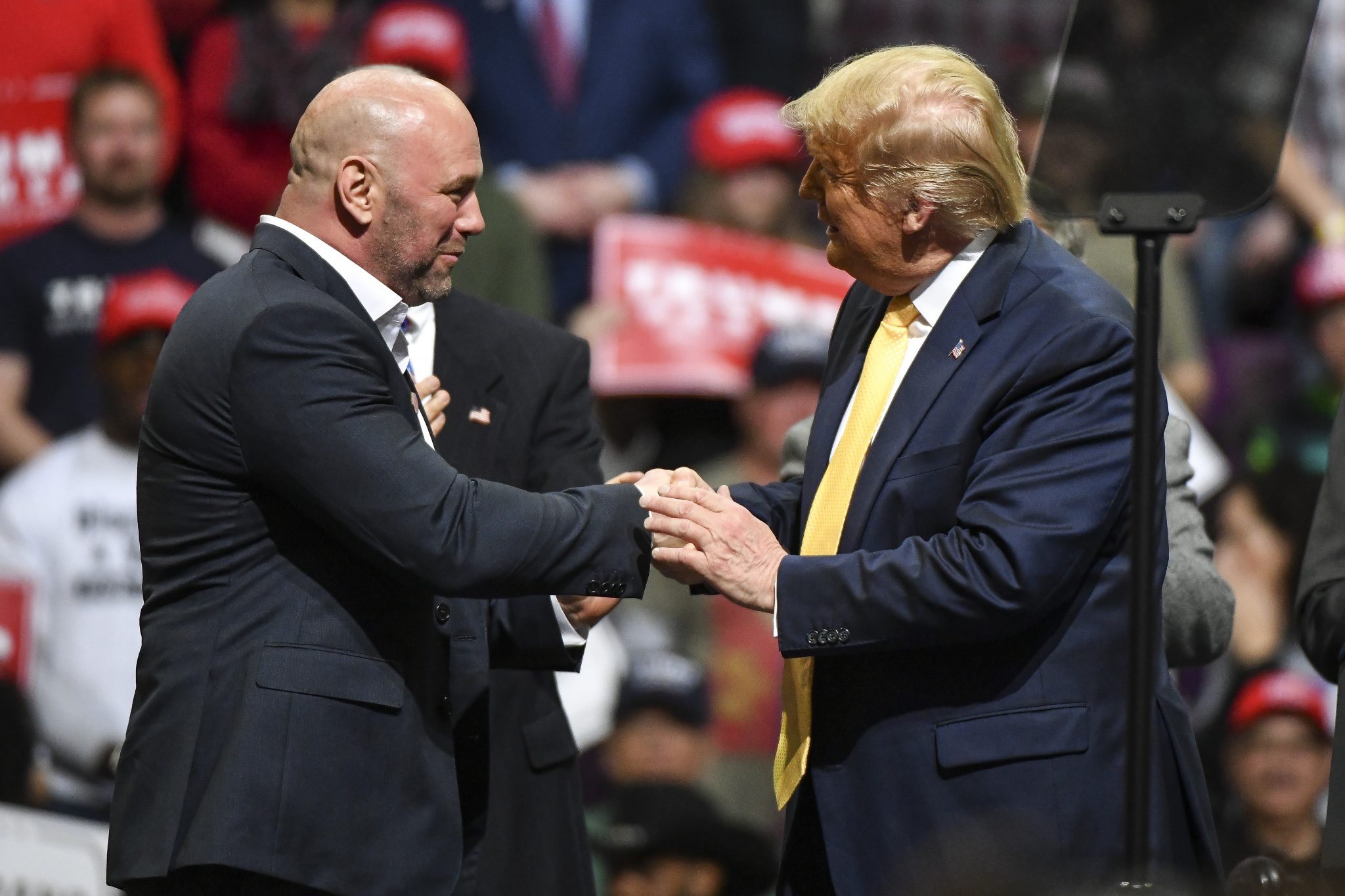 END_OF_DOCUMENT_TOKEN_TO_BE_REPLACED

A couple of questions arise from White's comments. First, why is he going all-in behind the advice of US President Donald Trump, who recently compared the Coronavirus with 'the regular flu'? Second, how on earth do Vice President Mike Pence and President Trump have time to both speak personally with the head of the UFC amid a State of Emergency?

With few other live sports taking place on Saturday in the United States, though, UFC Brasilia drew a big TV audience and had folks talking. For White, that end appears to have justified the means.

END_OF_DOCUMENT_TOKEN_TO_BE_REPLACED

While that event was taking place in Brazil, the Nevada State Athletic Commission was making the right call when it voted to revoke licensing for all combat sports event in the state until March 25. There is another commission meeting scheduled for March 25 and it is expected that the suspension of licences for more planned events in the state will be lengthened.

The UFC had already sought to get ahead of the ever-changing situation by moving UFC Columbus and Portland to their APEX arena facilities in Las Vegas. The logic, if you can describe it thus, was to go ahead with those events behind closed doors and broadcast them to the world.

The NSAC stance looks to have hobbled such schemes but White insists both events, as well as the UFC London fight card, will still be going ahead. Following UFC Brasilia, White appeared on ESPN's Sportscenter and very much dug his heels in. The show(s) must go on.

"Unless there’s a total shutdown of the country," he declared, "where people can’t leave their houses and things like that, these fights will happen. We’re gonna move on. These guys will compete. We will find venues, and we will figure this thing out. I mean, the only thing that’s gonna stop us is a complete government shutdown where everyone is confined to their homes."

Given where many European countries are right now, with many countries in either semi- or full-lockdown, and with the USA rapidly closing in on 3,000 confirmed cases of Covid-19, it is extremely hard to see these upcoming events going ahead.

One would think that the logistics or scrambling so much to stage fights, amid the growing public unease and social distancing advice, would be enough for the UFC to give in to the inevitable. Not so.

During his ESPN interview, on Saturday, Dana White insisted the next three 'Fight Night' events would go ahead, even if it had to be outside of Las Vegas, and that there would be two venue options for UFC 249 (Nurmagomedov vs. Ferguson) by Sunday. White said:

"As of now, the (March 28 and April 11) fights can’t happen at the Apex here in Las Vegas. We’re working to find new locations, but the fights will go on.

"They will continue. We’re not stopping. We will keep finding a way to put on the fights. I’m in the fight business. I’ve been doing this for over 20 years, and this stuff happens to me every weekend. So, I’m used to this stuff. Not at this level obviously, but this is what we do. And we always make sure that the cards happen, and they will continue to happen."

UFC 249 was supposed to be at the Barclays Center (sic) in Brooklyn but White says the promotion will find a venue for it. "The fans are all freaking out, but don’t worry," he stated. "That fight will happen."

The most immediate logistics twist for White and the UFC officials, and matchmakers, is salvaging UFC London after the UK government imposed a ban on mass gatherings. Leon Edwards is set to face Tyron Woodley in that main event and White says that is still the working plan. America is the planned destination so Edwards will need to fish out his British passport and get a flight out of London before midnight on Monday [when the USA imposes its travel ban on the UK].

As for the rest of the fight card for the event formerly known as UFC London, this is how crazy it is getting:

This is an email they are sending out to managers and reps about this new card next week. As you can see, they are even open to signing fighters who currently aren’t on the roster to fill it up, as well. pic.twitter.com/qYcYCDvdyo

Short-notice fights for 'UFC vets or fighters ready for the UFC, from bantamweight to welterweight'. For some fighters, this may be their only chance of making it to the big time but they must ask themselves if it is worth the risk.

UPDATE: Leon Edwards took to social media (below) on Sunday evening to confirm that he and his team would be remaining in the UK:

Is that the end of the matter? Not yet, as Colby Covington has volunteered to step up and face Woodley. Rafael Dos Anjos has told the UFC he could make 171lbs too. The farce goes on.

Bellator 241, meanwhile, was supposed to be going ahead at the Mohegan Sun in Connecticut on Saturday but sense prevailed at it was postponed until a later date. Bellator president Scott Coker even went so far as to guarantee 100% of the fight purses for every fighter that made weight for their bouts.

"As far as the fighters and officials, we paid everybody," Coker told The Telegraph. "We made sure they were looked after. Now it’s about trying to get all the fighters home, especially the ones in Europe."

They often say the fight game is a cruel business but at least there are good men like Scott Coker out there, holding their own.

As for Dana White and the UFC, it is time for the adults to come and take the decision out of their hands.


popular
Mario Balotelli, Luis Suarez, Fernando Torres and why Rio Ferdinand "hated them"
Javier Hernandez offers to play for Manchester United for free
"I don’t trust you" - Joey Barton delivers brutal dismissal of Irish defender
"I remember just hugging this Irish guy" - How one Kiwi rugby star reacted to Ireland's historic series win
Down county football is in tatters, but Conor Laverty is the man to piece it back together
"I'll ask for everyone that comes to the game to wear purple and roots for us" - Pat Fitzgerald
Gatecrashed interviews and chip-shop previews - Wexford GAA's online coverage sets the standard
You may also like
1 month ago
Jorge Masvidal speaks about defending BMF title against Conor McGregor
2 months ago
Dana White reveals who Conor McGregor could fight on UFC return
2 months ago
Your guide to a great weekend of sport and how to stream it all
2 months ago
Conor McGregor says he knows his next UFC opponent and fight date
3 months ago
Commentating cage-side, Daniel Cormier missed the UFC knock-out of the year
3 months ago
Conor McGregor responds to Michael Chandler's callout after UFC 274
Next Page